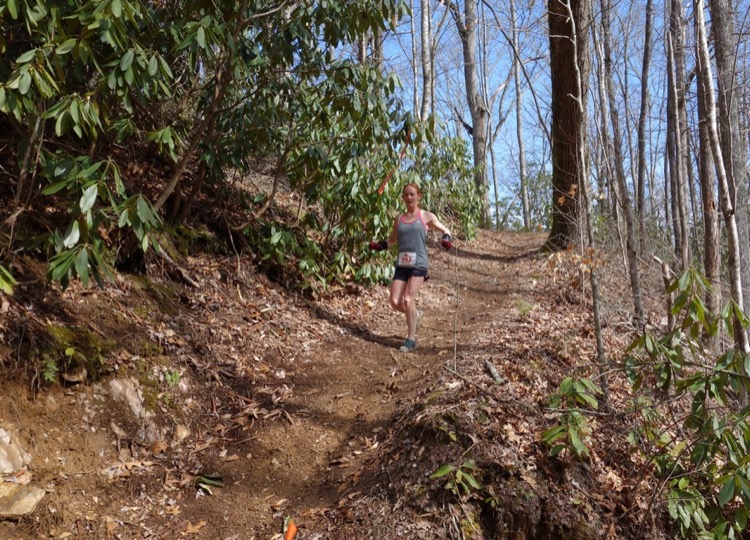 Alicia Hudson tears up the downhill

March 5, 2016 – Fontana, North Carolina
Maybe it was the buzzards circling overhead, or maybe it was the 20,000+ feet of elevation change facing our 50-mile runners, but I knew this would not be an ordinary race day!

When I created the course for the Fontandango, it was just a 10-mile race with 2,000 feet of ascent and the same amount of descent. Nestled in the mountains of Western North Carolina with views of Lake Fontana and Fontana Dam, Fontana Village Resort is the perfect location to host a mountain trail race! The course is a mixture of single- and double-track with some technical aspects of footing tossed in for fun! The trails have recently had some major renovations and were in great condition. Being two hours from Asheville, NC I began to think, how many people would come for just a 10-mile race? So I added a 50k and 50-mile option without thinking about the total elevation change.

It wasn’t until course set-up that I realized how much elevation change these runners were about to face. As I stated in my pre-race instructions, our current position at the start/finish area sits in the bottom of a bowl as mountains surrounded us. Everything goes up STEEPLY from there. I warned each racer they would indeed curse me late in the lap and in fact each racer confessed their profanity by their first lap’s end.

As we sent the 10-mile race off, I ran with Natasha Shipman and Alicia Hudelson down the Resort entrance road and I watched the runners enter the trail and begin their journey to the finish. Fifteen minutes later I did the same for the 50k and 50-mile races.

The 10 milers finished with Natasha taking the overall win in 1:20:07 and Alicia following just over eight minutes later in second place with Abby Harris taking third and setting the tone for the day. Three women took the top three overall spots! This race had 100% finisher rate.

From here the story of the 50k and the 50-miler join together. After the first lap, the 50k & 50-mile leaders came through together chipper and strong. The first lap did see two runners drop out of the 50-mile race due to the difficulty of the course and time on their feet it took to complete the lap.

The second lap spread the field out, and we saw Jim Hall take the overall lead of the race with three laps to go for him. Drew Shrelfer lead the 50k going into the final lap with Wendy Wright and Chad Hallyburton respectively following close on his heels. Meanwhile, others were starting to question their dedication to finish this 50 miler upon completion of their second lap. Only one person dropped from the 50k, and it was after the second lap that the decision was made to pull the plug due to fear of injury.

Over the course of the third and final lap for the 50kers, Drew held his lead and won, just missing breaking six hours in a time of 6:01. Chad had a great third lap, and overtook Wendy to finish second in 6:11 while Wendy finished a strong third place overall and first female in a time of 6:12. Meanwhile Jim Hall continued to lead with Sandra (Sandy) Daust following just 30 minutes behind. As the buzzards began to circle overhead, the lure of finishing at the 50k mark claimed the remaining eight runners in the 50-miler one by one upon completion of their third lap. Each 50-mile runner declared themselves finished and accepted the 50k finishers award instead.

With only two runners remaining in the 50-mile, darkness would soon set in on their fifth and final lap, so we made sure Jim and Sandy had headlamps for their final push to the finish. Jim and Sandy both looked amazing after having already been through 16,000+ feet of elevation change! Sandy had expressed concern to one of the race staff about her lack of adequate lighting. Upon hearing this, I chased after her and caught up to her with six miles left and dusk shedding its last few rays for the day. I gave her my headlamp and ran with her to the finish. Jim had won in an awesome 10 hours and 25 minutes, followed by Sandy in 10 hours and 51 minutes.

Twenty thousand feet of elevation change can cripple the strongest runner. I am proud of all who made an attempt to toe the line for this event. I hope more of you will join us at Fontana next year for the race. Come stay for a long weekend and see if you can avoid being buzzard bait!