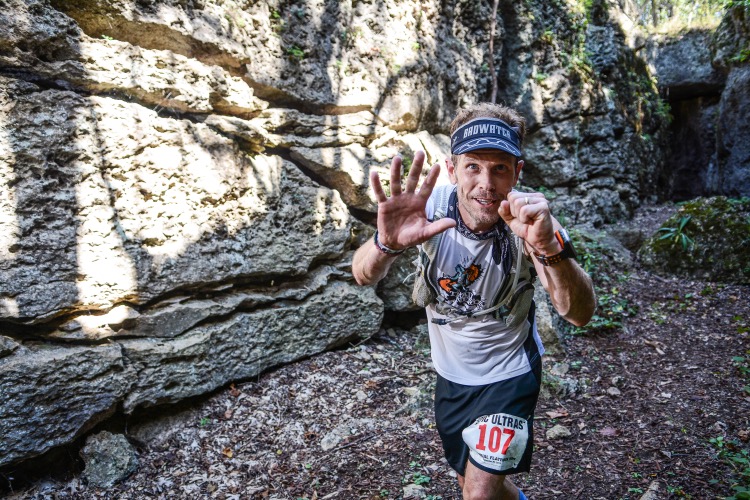 Any competitor who researches the FlatRock 50K knows what to expect from the course: Rocks. Lots of them.

But what the mind knows does not always meld with adrenaline, fresh legs, and a love for trail running. Many a runner has been sucked in by the beauty of the first three miles, which generally trend upward, hugging rock walls and zig-zagging between boulders and rocky outcroppings under a canopy of tall trees, with a colorful sunrise over lake views on the left. Fresh legs welcome the challenge, bounding from one careful foot placement to the next. It is undeniably fun…the first time. But this is an out-and-back course, and it’s the “back” that leaves the biggest impression on runners.

“It was more difficult than I thought,” said first-time FlatRocker Keith Wurm, who talked to veterans and read a number of race reports in preparation for the race. “It was lots of movement, and you always have to be aware of where your feet are being placed. Those rocks start to grow once your legs get tired. Some of those rocks that were so much fun to bound around—when you get gassed—aren’t as much fun any more.”

The 2015 men’s race boasted a deep field, including three previous winners. The front runners stayed close through the first half, but a fast transition at the turnaround aid station allowed Wurm to take the lead and pull away slightly as he forged out on the return trip.

Meanwhile, temperatures climbed through the 70s and were well above 80°F four hours into the race, proving to be a significant factor for the entire field. Aaron Norman maintained patience—a strategy that paid off for him in his win at this spring’s FlatRock 101K on the same course—and started using an ice bandanna and ice in his hat at the 25K mark. About eight miles later, Norman had moved from fourth into second place, and was closing in on Wurm when nature gave Norman some assistance in the form of a venomous snake.

“When I caught up to (Wurm), there was a snake that shot off the trail and it startled him and he jumped, tweaked his leg, and cramped up,” said Norman.

“I cramped up big time,” said Wurm, recalling the ill-timed run-in with the copperhead. “It was probably the lowest spot in the race. If there hadn’t been a snake there, I might have sat down and just pouted for a little bit.”

Wurm recovered from the snake-induced cramp, but Norman opened up a ten-minute lead, finishing in 4:51—and becoming only the second person to rack up three sub-five-hour finishes in the race’s 21-year history.

The women’s race spaced out early, with past FlatRock 25K-winner Olivia Eves and past 50K and 101K winner Mindy Coolman adopting polar-opposite race strategies: a fast start versus a conservative start. Eves, who notes that she doesn’t consider herself an ultrarunner, teamed up with her husband to run speedy early splits. “I mostly maintained my mental drive when I saw there was a good chance I could be the female champ,” she said. “My feet and ankles and toes were hurting so bad, but I kept thinking that I couldn’t slow down because that next girl might have saved everything for a big finish and might catch me.”

Coolman, meanwhile, tucked in with a conversational group and averaged a 14-minute pace for the first 3.5 miles. “I started out behind them and chilled and talked and laughed,” she said. “Then I got in front of those people and set a pace that was comfortable and hung onto it. I stayed at that pace until about mile 22 when the heat started getting to me.” As both runners maintained their pace late in the race, they finished about 25 minutes apart, with Eves in front with a finish time of 6:03.

“It is a great, challenging course,” said Eves. “It is probably one of the most difficult courses in this area.”

“It holds a special place in my heart since I set the course record at the 50K and the 100K. I hope to always keep getting closer to that and maybe one day set a new record,” said Coolman, when asked what keeps her coming back to FlatRock. “Plus, it’s an ultrarunning reunion—the people here, the volunteers… and the challenge of the course itself.”