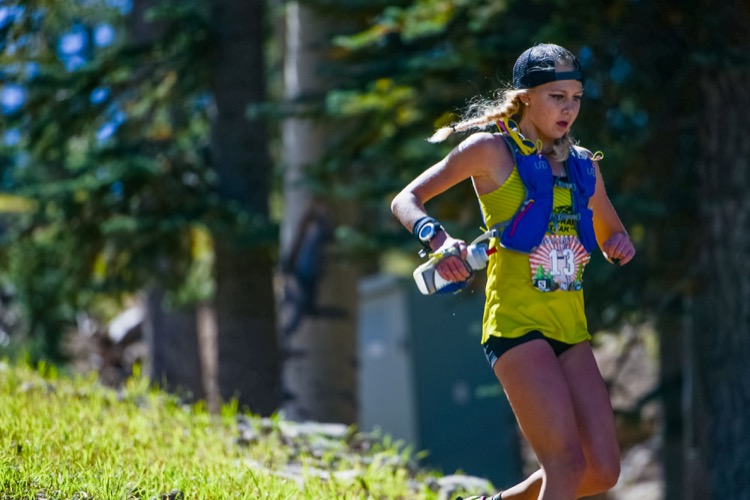 Flagstaff Sky Race was a beautiful display of not only what Flagstaff has to offer mountain runners but of what hard work and a season of Skyrunning produces in the final performances. Prize money and pride were big motivators but hard work, determination, and sure-footing is what really won the day.

The weather was in tune with the races. Friday for the Vertical K (VK) there were fierce winds that mimicked the performances up the side of Agassiz Peak. Saturday was calmer with unrelenting sun warming up the day as the runners ascended merciless hills, mountain grades and ski slopes.

While every race boasted a deep field and exciting races, the most talked about performance came down to a photo finish for the men’s VK. Word came at the top of the race, at 11,600ft, that the first runners were approaching. Not but moments later, two runners came flying around the curve and over the finish line in 42:47. No spectator was able to tell who had won the race between JP Donovan of Incline Village, CA and Torstein Tengsareid of Norway. Photos and video were reviewed but still, in real-time, the finish was indecipherable. Not until the video was slowed down could it be noted that Donovan had, indeed, managed to out-reach Tengsareid and had his foot on the finish line first. While photo finishes can be expected on the track, they are nothing short of astounding on the trail much less a trail that asks runners to climb 3280 feet over 3 miles on unstable footing. The women’s VK was clearly won by Anna Mae Flynn, also of Incline Village, CA in 57:37; a new course record by more than 17 minutes.

The races on Saturday afforded runners a longer distance to put time on their competition. A slight change to the course allowed for better spectating at Agassiz lodge with runners coming directly down Agassiz ski slope and across the timing mats before heading back out and up another ski slope on a 5k loop that topped out at the same elevation (11,600 feet) as the VK. Watching runners jump, slide, and/or gingerly pick their way down the slope made for great fun all day long.

Martin Anthamatten of Zermatt, Switzerland and World Ski Mountaineering Champion won the 39K in a new course record of 3:59:15 and upset the favorite coming into the race, Joseph Gray, by seven minutes. Megan Kimmel of Silverton, Colorado won the women’s race in 4:29:42 and local Flagstaff resident, Kristi Knecht followed in second.

The 55K saw a repeat winner with Daniel Kraft of Corvallis, Oregon proving that this is his type of course. Gabe McGowan of Tucson, Arizona trailed by just five minutes for second place. Flagstaff local, Ian Torrence, took home the master’s win. The women’s race was handily won by 19 year-old Ashley Erba of Boulder, Colorado who came in seventh overall and gapped second place by almost 50 minutes.

The finish line, at Agassiz Lodge, was a hotbed of activity all day on Saturday. Visitors coming to take the scenic chair lift could not help but get pulled into the excitement of the race, cheering on runners they could see far below them or staying at the finish line to watch the races unfold. Runners were sprawled out on chairs, the ground, or random water coolers with their bodies spent from the exertion but, nonetheless, still there to hangout and welcome their fellow competitors to the reprieve of a hard-earned finish.

Next year’s date is already tentatively set for October 1, 2016 and those of us who experienced the festivities of the weekend are already counting down in anticipation!