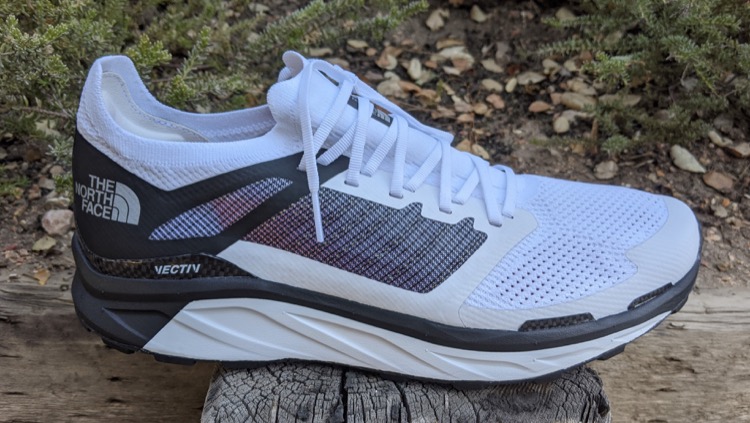 The North Face has an extensive history in gear and apparel innovation, but their footwear side has a recent history of difficulty getting established. This spring, the company swings for the fences with a new design approach that has been several years in the making and tested extensively with their team of elite athletes.

The technology is called VECTIV and in essence, it combines a rocker high-energy midsole compound with a firm propulsion plate, and a super secure outsole platform to grip the trail and allow speed with confidence. Much of the design and testing of this technology was built around the iconic UTMB race – including Pau Capell’s solo FKT attempt last August. One of the key goals included promoting faster downhill speed while simultaneously diminishing leg impact and fatigue over a multi-day push. The North Face claims that the resulting VECTIV footwear can reduce downhill tibial impact by 10% compared to standard midsole platforms. 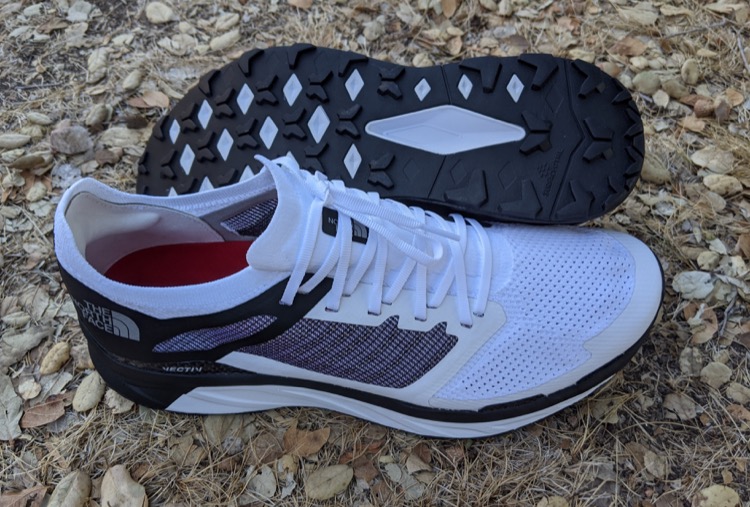 VECTIV technology is being incorporated in eight models of TNF’s trail shoes this year, to reduce impact and maximize energy for a variety of users. We tested the Flight VECTIV trail running shoe – the top-end model designed for high-volume training or high-performance racing. The geometry of each model is the same, but the material construction differs. For example, the propulsion plate in the Flight is made of carbon fiber, but in the midrange Infinite it is a Pebax thermoplastic elastomer. In the entry-level Enduris, it is made of TPU. The uppers and footbed also differ between the three models, but the midsole compounds and outsoles are consistent across the trail running line. 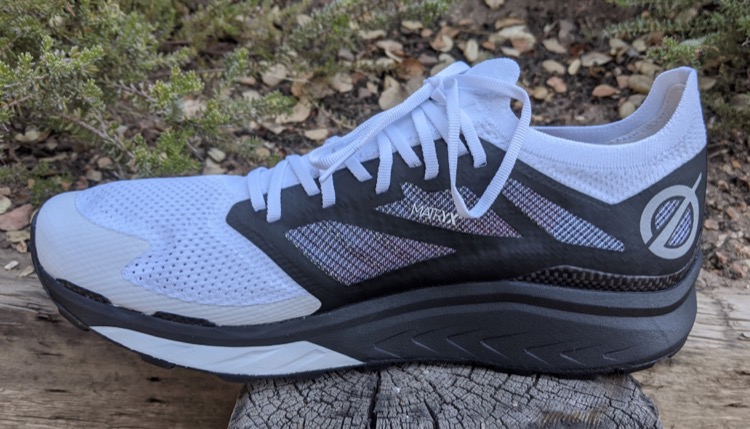 Uppers of the Flight VECTIV feature a traditional, lightweight mesh in the forefoot, but the midfoot panels consist of a super abrasion-resistant Matryx compound that uses thin Kevlar filaments for strength and durability. Matryx has been around for a couple of years now, and we can attest to its ruggedness and longevity on other trail shoe models we’ve used. It doesn’t significantly compromise breathability, but it can be slightly restrictive, which is why traditional (and more flexible) mesh is used in the forefoot. In the midfoot panels, the fabric’s restrictiveness actually enhances lateral stability.

One design quirk we had some issues with is the ankle collar, which combines a single piece with the front upper in lieu of having a traditional tongue. The collar has a bit of stretch, but it can be somewhat tricky to get your foot into the shoe. Once it’s in place, light padding on top of the foot provides comfort as a traditional tongue does, and the fit is secure on technical and lateral terrain. Light padding around the Achilles further contributes to fit and comfort. 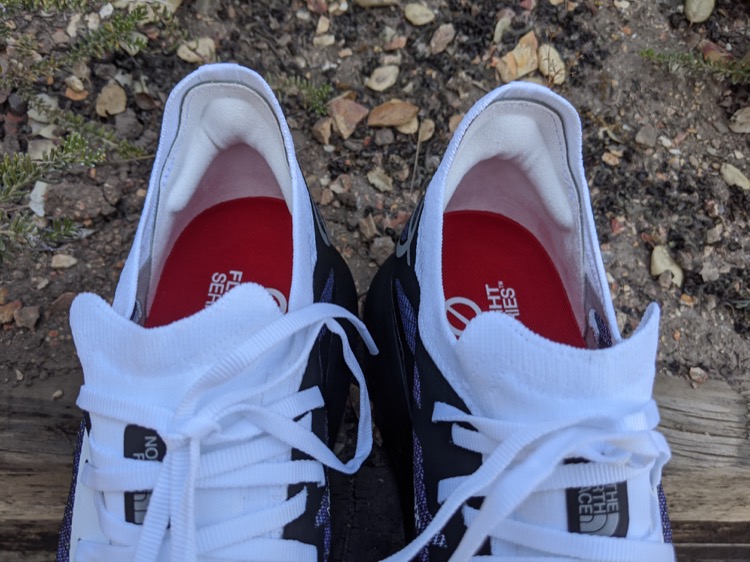 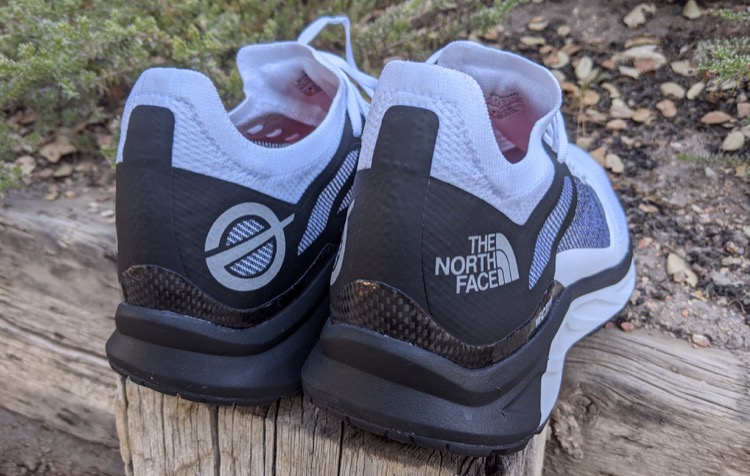 Beneath the foot is where the real innovations take place, beginning with a slightly contoured midsole compound that cradles the foot upon impact. The full-length carbon fiber plate has a similar contour as the midsole, providing a touch of guidance without full-blown stability features. The dual-density midsole is softer in the rear foot for impact absorption, and firmer in the forefoot for responsiveness. Its rocker midsole facilitates forward momentum after foot strike with minimal energy cost. The proprietary outsole compound has proven to be very grippy in wet and dry conditions, establishing secure contact with the ground in versatile weather.

All of the aforementioned design elements contribute to enhanced overall speed, as does the relatively lightweight spec weight. In our testing, these features work as advertised; bombing down hills or holding tempo pace on flatter surfaces just seems a little easier in the Flight VECTIV than in many other shoes we’ve tested. It’s hard to tell if the 10% fatigue savings is legit, as our longest runs have only been in the 20-mile range. However, The North Face’s ambition to create a race-ready mountain shoe appears to have been fulfilled, and the Flight VECTIV has the makings of a shoe that will hopefully become a standard in the company’s lineup.

The North Face Flight VECTIV shoe is now available in men’s and women’s models at www.thenorthface.com. 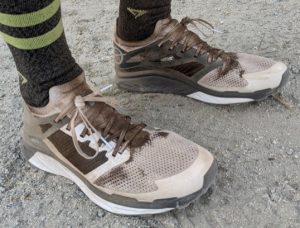 They don’t stay white for long…

Great article, very informative! Good that North Face is upgrading their trail shoes. Need to check them out for myself.
Thanks again for the facts and data.

will test them extensively next week in the BK100. So far a had a few runs (longest was 2 hours) and I was very impressed by comfort, traction & stability

Looking forward to your longterm review. Especially if your legs feel really protected / fresher on those loooong runs

Hey, useful review! especially the picture of you using them.
I am curious to know:
1. Did you attempt washing your North Face Flight Vectiv shoes
2. If yes, how did you wash them, temperature, handwash or washing machine etc.
3. If you washed them, did they end up still looking as pictured or did they turn back white? Did it affect the durability of the carbon (i’d assume carbon doesn’t pair well in a laundry machine)

Jo: I just rinse them with a hose. Durability isn’t affected.