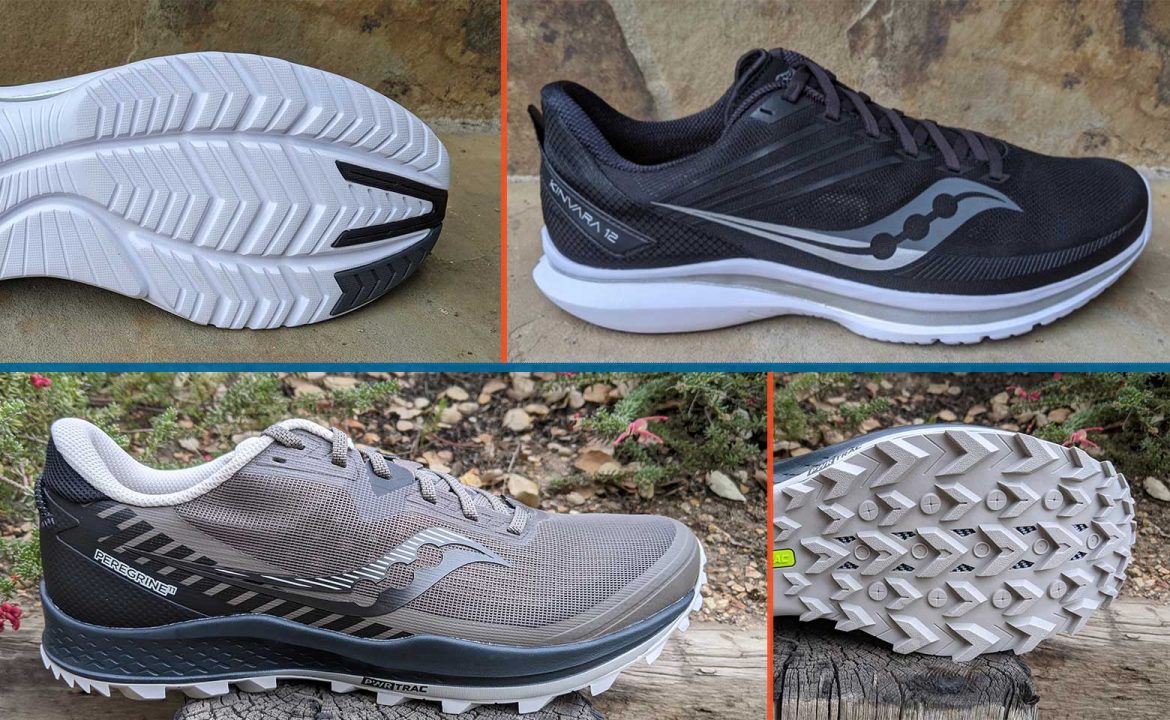 Saucony’s Kinvara and Peregrine shoes share similar DNA, even though one is a road shoe and the other is designed for trails. Both were born from the minimalist running shoe boom of the mid-2000s, combining sleek design with lightweight construction and just enough performance elements to allow fast but natural movement. Each of these models have been through a number of revisions since that time, but they haven’t strayed from their original mission and both received a few updates this spring.

Over the years, the Kinvara has developed a somewhat cult-like following as a speed trainer or race day secret weapon. We’ve used ours extensively for track workouts, particularly on shorter intervals, to practice quick leg turnover. Version 12 is intended to be more aggressive than its predecessor, with a simplified upper, modified midsole shape and increased durability in the outsole. 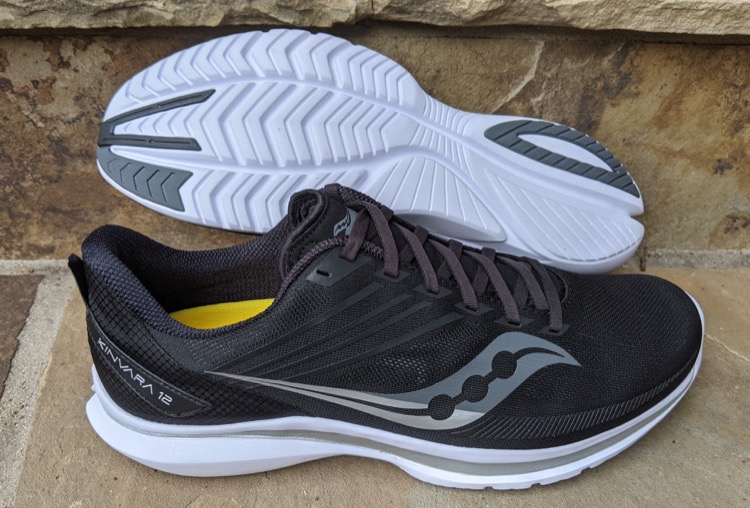 The upper is noticeably thinner and more airy than the previous version. You can easily see through the spacing of the forefoot mesh, and there’s virtually no restriction to ventilation. The heel collar and padded tongue of the previous version have diminished on version 12, to help shave off a tiny bit of weight (the K12 is 0.3oz lighter than the 11) and to accentuate the minimalist feel. The overall fit and feel of the upper is still comfortable and snug even with less padding. 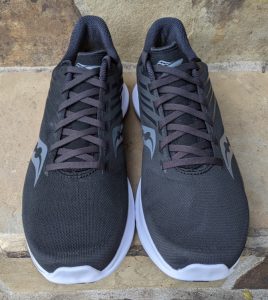 Saucony advertises “updated geometries” in the midsole of the Kinvara 12, although the stack heights and heel-toe drop remain the same. Our sense is that there is a bit more contour through the midfoot, with a narrower platform in the heel and a slightly greater upward curl in the forefoot. The midsole compound remains PWRRUN, a super-lightweight polymer that has springy energy return while maintaining durability and flexibility. Transition from the heel to forefoot is quite smooth, and despite having a decent stack height, ground feel is still preserved on even terrain. The midsole design also includes FORMFIT technology that essentially cradles the foot in the midsole compound, providing a bit of guidance and a secure fit even when sprinting in lane one.

The majority of the Kinvara outsole is exposed EVA, with only a bare minimum of outsole rubber for reinforcement under the lateral heel and medial toes. This is designed for the most efficient runners, but if you happen to land more medially at the heel or more centrally in the midfoot, you’ll wear the compound down relatively quickly on hard surfaces. This is another reason we like using the Kinvara for track workouts, as the all-weather surface is a bit less destructive than asphalt or concrete. 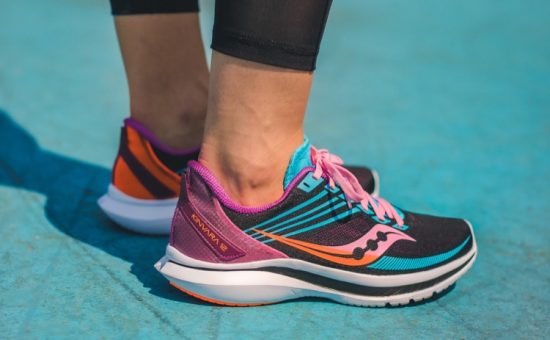 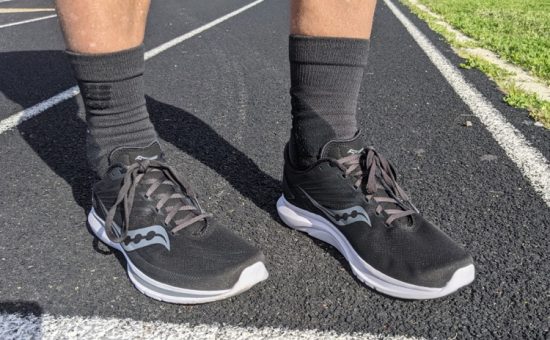 Updates to the Peregrine 11 are relatively minor, focusing mainly on the upper, which combines a dynamic air mesh interior bootie for fit and comfort with an ultralight top layer to fend off dust and grit. The bootie creates a sock-like feel, and the exterior mesh flexes easily without any pressure points. The heel counter is lower in profile compared to version 10, and less surface area is covered by overlays, particularly on the medial side. An extra lacing hole has been added to customize tension better, and there is a bit more padding in the tongue and around the heel collar. Despite this augmented padding, the Peregrine 11 is more than a half ounce lighter in weight. 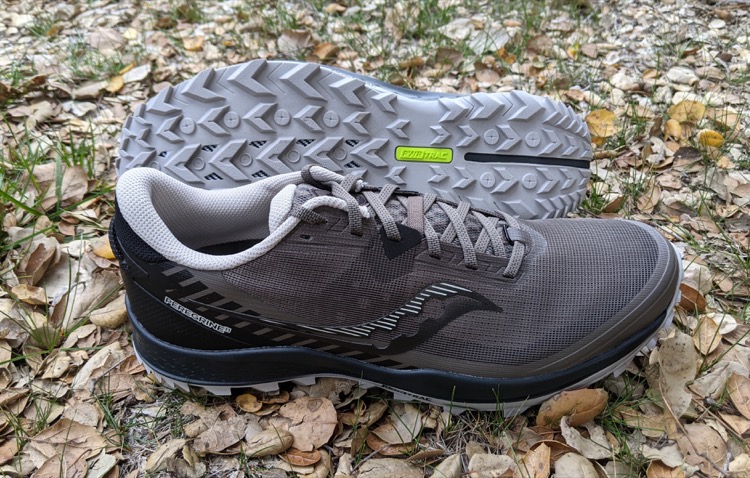 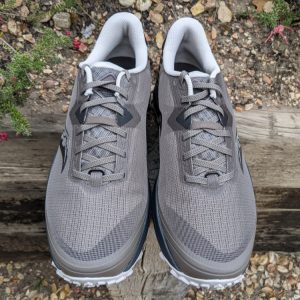 From the midsole down, the foundation of the Peregrine 11 remains largely unchanged. The midsole is composed of the same PWRRUN compound found on the Kinvara, providing a highly responsive ride that makes it easy to push the pace. A forefoot rock plate helps disperse impact when you’re hammering on irregular terrain, and we’re very impressed with the PWRTRAC outsole rubber that provides adequate grippiness in wet and dry conditions. Aggressive 5mm lugs are angled in the forefoot to assist climbing traction and in the rearfoot to improve braking ability. We found the midsole and outsole combination provided a relatively smooth ride on firm surfaces (including asphalt on the way to the trailhead) as well as gravelly, rocky or otherwise sketchy trails. 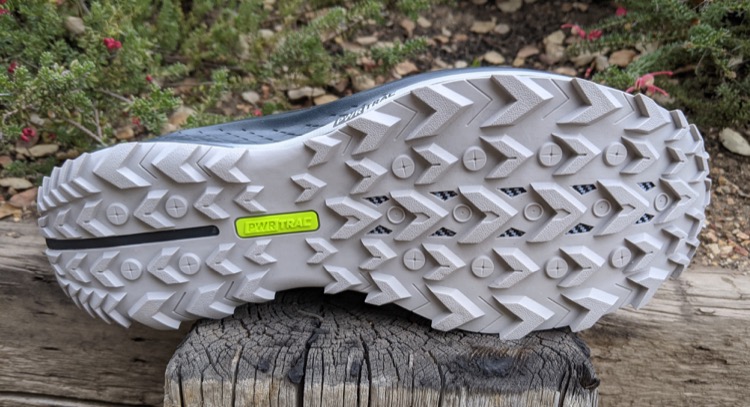 This season, the Peregrine is offered in three varieties. In addition to the original Peregrine 11 that we tested, there is a Peregrine 11 ST (soft terrain) designed for sloppy trails, with deeper outsole lugs spaced farther apart to grip and shed mud more easily and a tight mesh shield over the tongue for increased protection. The third option is a GTX model that has a similar lugging layout as the ST and adds a waterproof GORE-TEX upper to prevent water intrusion. All three Peregrine 11 models have the same midsole compound, stack heights and geometry to provide similar ride quality across the collection.

The Saucony Kinvara 12 and Peregrine 11 are now available at www.saucony.com. 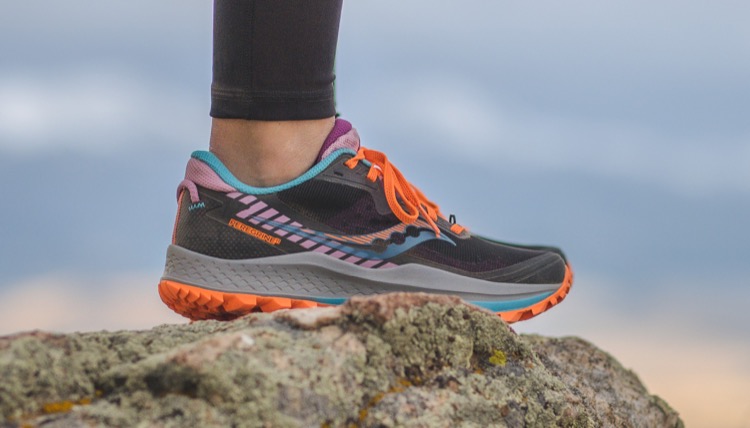