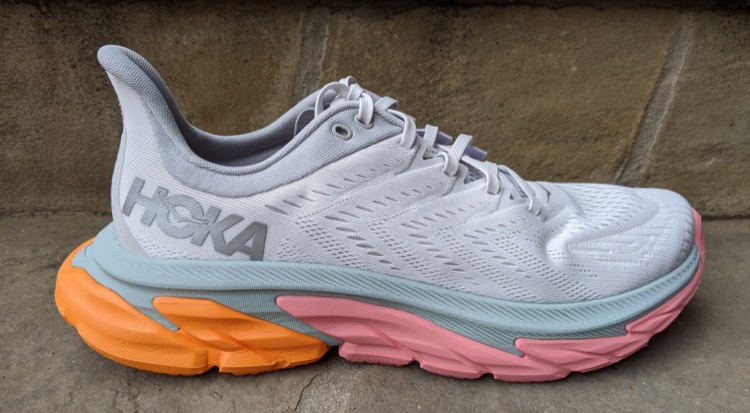 Innovation can be an interesting process. Any creative-minded person can attest that you have to throw some ridiculous ideas into the world before you develop one that lands precisely where you’d like it. We suspect there are a lot of creative types in the HOKA lab, because we’ve observed this exact process take place in the creation of the Clifton Edge.

The ridiculous piece (in our opinion) was the TenNine, an enormous trail running shoe released last spring. It was built for smoothness and stability on downhills, but was too heavy for uphill efficiency, too bulky for rocky terrain and legitimately dangerous to use on stairs. The midsole seemed like madness, but there was a legitimate method to the design elements – and those have been tamed down and incorporated quite effectively on the new Clifton Edge. It’s a shoe primarily designed for road use, but we’ve used ours comfortably on mild trails and gravel in addition to asphalt.

For obvious reasons, the midsole is the focus of this shoe – but before elaborating on that, let’s address the name. The naming of this model is somewhat confusing, as it has very little resemblance to the traditional Clifton road shoe aside from its comparable overall weight and heel-to-toe drop. Otherwise, construction of the uppers and midsole is significantly different.

One of the best aspects of the Clifton Edge is its cushioning-to-weight ratio, thanks to a newly developed lightweight compression-molded EVA compound. It provides plush cushioning underfoot while maintaining a decent amount of resilience and springiness as your foot rolls forward towards toe-off. We used this shoe for interval work on the roads as well as routine training mileage, and it shifted very easily between 9-minute miles and 6-minute-pace intervals. 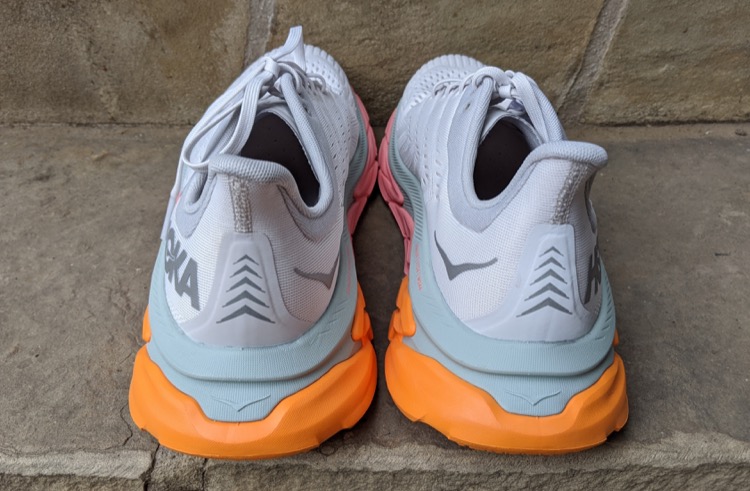 And then there’s the heel, which extends approximately 1.5 inches beyond the end of the foot, as compared to 3 inches on the HOKA TenNine. The idea here is to disperse and diminish impact forces of the rearfoot contacting the ground, and unlike the TenNine, which only worked its magic on downhills, the Clifton Edge applies this biomechanic advantage on flat surfaces and inclines as well as downhills. If you’re a pure midfoot striker, this design is irrelevant, but for the vast majority of us who are at least occasional heel strikers, the effect creates a very smooth transition between the “flight” phase of your foot and ground contact. We found this effect particularly useful when increasing our pace, as the natural tendency when running faster is to increase your stride length and increase the degree of impact through the rearfoot. 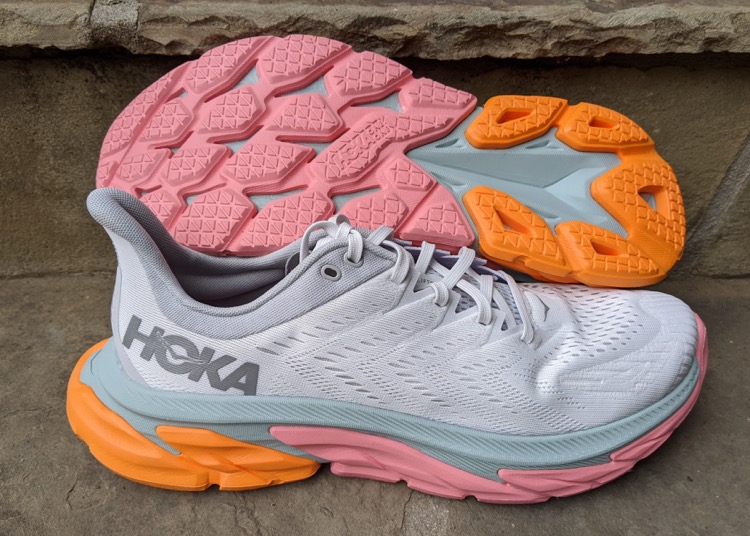 In addition to the heel, the midsole compound extends wider than the last of the shoe – again, this is in similar fashion to the TenNine, but to a lesser degree and with better functional advantage. The wide platform establishes strong ground stability, which is one reason the Clifton Edge is equally comfortable on gravel roads or asphalt. Whereas the midsole extension of the TenNine was too wide, making the platform unnecessarily heavy and cumbersome, fortunately the footprint of this shoe hits the sweet spot of giving a performance benefit without excess weight. Another significant benefit of this wide and lightweight platform is that the Clifton Edge is an amazing shoe to use for running on sand, because it prevents you from sinking too deep with each foot strike.

The midsole compound is incorporated into the EVA outsole, which is compression molded for increased durability but still wears down noticeably faster than traditional outsole rubber. We started seeing significant outsole wear in our testing within the first 50 miles, and runners who habitually wear one section of the shoe down quickly will probably reach the point of breakdown much faster on the Clifton Edge than on other everyday trainers. 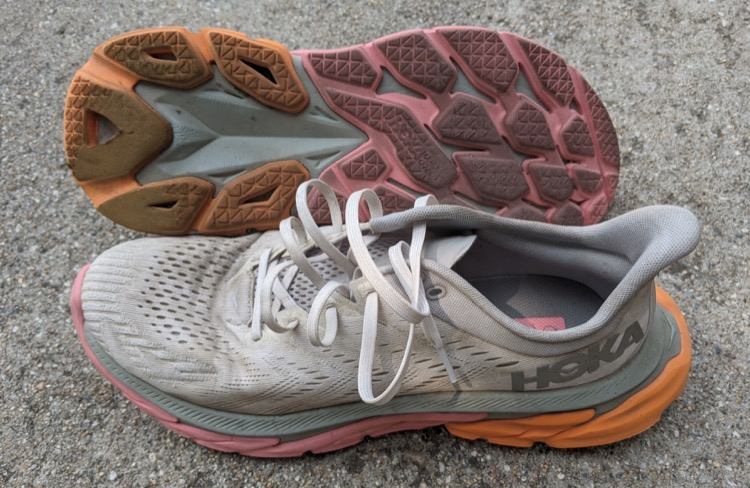 Signs of outsole wear after about 100 miles

Although the midsole is clearly the focal point of this shoe, the uppers of the Clifton Edge are too impressive to avoid description. The TPU yarn is remarkably thin and lightweight with outstanding breathability, but it wraps the foot super comfortably and locks the foot onto the midsole platform extremely well, even on irregular terrain. The toe box is roomy enough to allow for swelling on long runs, and the rear foot has moderate padding in precisely the right places to give a stable fit without bulk. The high Achilles peak looks daunting but rode very comfortably without irritation, even on our initial runs. 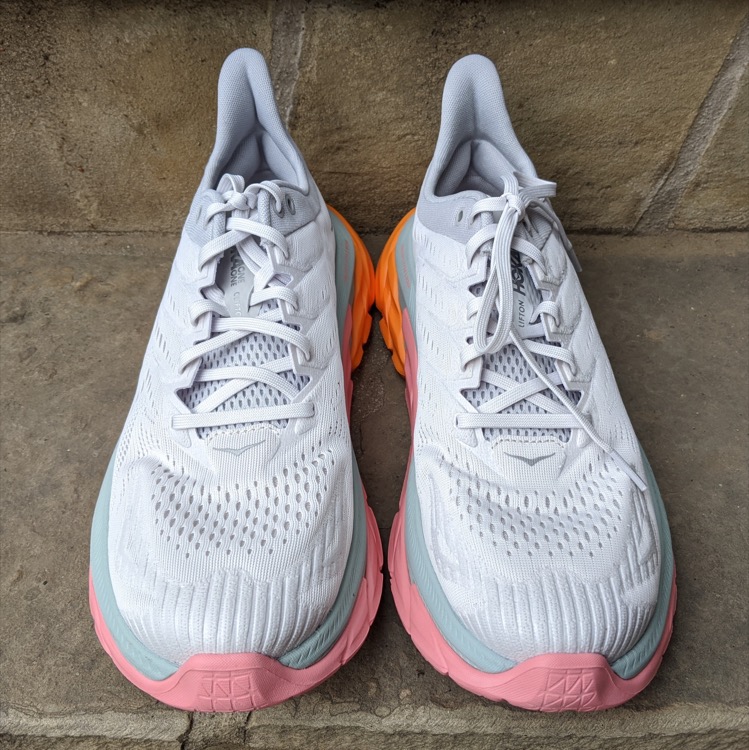 We began testing the Clifton Edge thinking it would be a bit gimmicky, but were pleasantly surprised to find that it accommodated and supported pretty much every type of running we tested on roads and moderate trails. With continued use, we’ve been impressed with its ongoing comfort and durability over moderately high mileage (approximately 300 thus far). If it took working our way through the TenNine shoe to get here, the Clifton Edge certainly seems to have justified the creative process.

The HOKA ONE ONE Clifton Edge is now available in men’s and women’s versions from www.hokaoneone.com.

I’ve run about 40 miles on my Clifton Edge so far, and I’ll add three thoughts to the excellent (and accurate) review.

(1) it’s easy to tie the laces too tight with a runner’s loop, which can create some stress and bruising across the top of the foot near the ankle because the laces to not stretch much, if at all. I thought tying the laces loosely would cause my foot to slide around in the shoe, but not so. Go easy on the laces, and the shoe works well.

(2) I wish Hoka had made the insole removable.

(3) I really enjoy running in these.