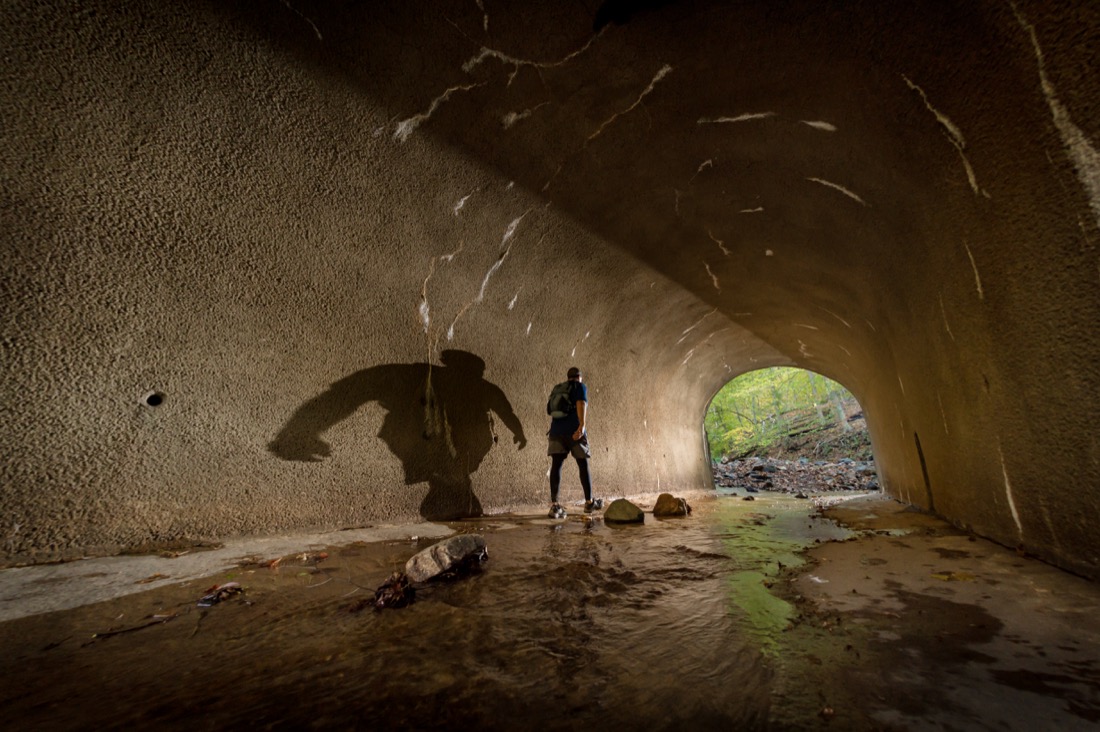 A lone runner crosses under railroad tracks via a tunnel during the Patapsco 50k Ultramarathon. photo: Geoffrey Baker

This article originally appeared in the Jan/Feb 2015 issue of UltraRunning Magazine.

“There were never any preconceived notions on what was normal or possible, so I never set limitations: I just did what my friends were doing and what felt right.”– Bruce LaBelle, on his beginnings in ultra-distance running.

People get into the sport of ultrarunning for various reasons. Some to escape: the roads, the crowds, the noise and the stresses of everyday life. Others, to explore: nature, new places and the limits of both body and mind.

To our delight, what we find out is those limits lie far beyond our wildest dreams. “I went somewhere I never thought possible” is a common refrain of any 100-mile finisher.

Success emboldens us, so we push farther. We do things we never thought were possible: before, running two marathons in a year was monumental; now, covering that distance in training is considered a “short long run,” fit around The Ultra-of-The-Month—as if we’re enrolled in a club.

In some respects, it is a club.

Tim Noakes’ Central Governor theory posits that our brain throws up barriers to stop us, long before we’re in any danger of hurting ourselves. Fatigue is a brain-created phenomenon designed to protect us. It’s like a low-fuel light that flashes, when there’s still a quarter tank (or more) remaining. And through ultrarunning, we learn to push beyond fatigue, beyond pain, to find a whole other gear. The secret reserve.

But there are limits, or else no such mechanism would exist in the first place.

Most of us eventually find limits, often with painful consequences, but our stories are less glamorous, and the cautionary tales and guiding principles of moderation are less likely to make the headlines of our happy-go-trekking world, where more is always better.

I found the ultra trail world four years ago, and almost immediately threw away everything I’d ever learned about The Rules of Running: 15 years of road, track and grass; 10 years of coaching and more college credits than I wish to divulge. And I dove in. I pushed the limits, and in doing so, experienced more joy and success than ever before. But I eventually found those limits: at the bottom of El Dorado Canyon on the Western States trail.

After flaming out in 2013, I went searching for answers. For some balance.

On a warm evening in the Sacramento Valley last fall, I met with Bruce LaBelle for my first lesson. Over pints of Pliny, he let me in on The Secret to how a man can run over 30 years without a real injury: Limits to the Limitless.

While acknowledging that trail running is a new frontier, there is a natural, almost animalistic balance. Only half-jokingly, LaBelle learned balance from his dog: you spend hours in the woods, then come home and lie around for several days, ‘til you’re ready to do it again.

Balance is there, if only you listen. And listening requires tuning in—and tuning out. Surrounded by a band of rugged young adventurers running roughshod across the Sierras, LaBelle notes that, “Whenever I felt aches or pains come on, I stopped: I took a few days off until it healed. There were issues, but I never allowed them to become injuries.”

And despite being one of only a handful of runners to break 16 hours at the fabled Western States, LaBelle never ran year-round. There were other fun things to do, instead. Like hike up to mountain streams, then float back down… using his pack as a raft. “Gorge Scrambling,” LaBelle calls it. And backcountry skiing. Being amidst nature was his passion, not just running. Pushing limits, but across a broad spectrum, only picking up running again when bib numbers were handed out for the next Western States.

Tim Twietmeyer, surely he had a problem. He must be obsessive-compulsive, because he ran the same race for 25 years in a row. You can’t blame him. He did pretty well: five wins, 10 top-fives, 15 top-10s and all 25 in a day. Despite his compulsion, he found balance. Or, perhaps, the limits were set for him?

Over coffee one Saturday morning last fall, he posed the question, “When you win a big race, you’re on top of the world, you’re The Man. Once that happens, how do you keep perspective and balance?” And I don’t think it’s rhetorical; I really don’t think he knows. Because he had help: a family, and a career that kept him grounded to the big-picture priorities of his life.

Remarking on the explosion of races and supported opportunities facing today’s elite runners, he quipped, “If I decided to do what the elites now do [race internationally and compete all year long], my belongings would be at the end of the driveway when I got home.”

I don’t think he was kidding.

Often, we need help from others to explore our limits, to push beyond our comfort zone, beyond our timid internal governors, toward our greatest selves. But perhaps, just as often, we need someone (man or beast) to help us realize when we’re about to wander too far, and keep us on the right path.

I was speaking to Ann Trason on the phone earlier this year for a story. Trason, as humble as she is decorated, quickly turned the questions to me, and my 2013 race. I told her about my excessively high heart rate in the high country, and how I ignored my heart rate monitor, ultimately tearing it off at Duncan Canyon.

And, in a matter of fact way she replied, “Well, that was stupid!”

Yes, Ann, it was. And thank you for caring enough to tell me so.