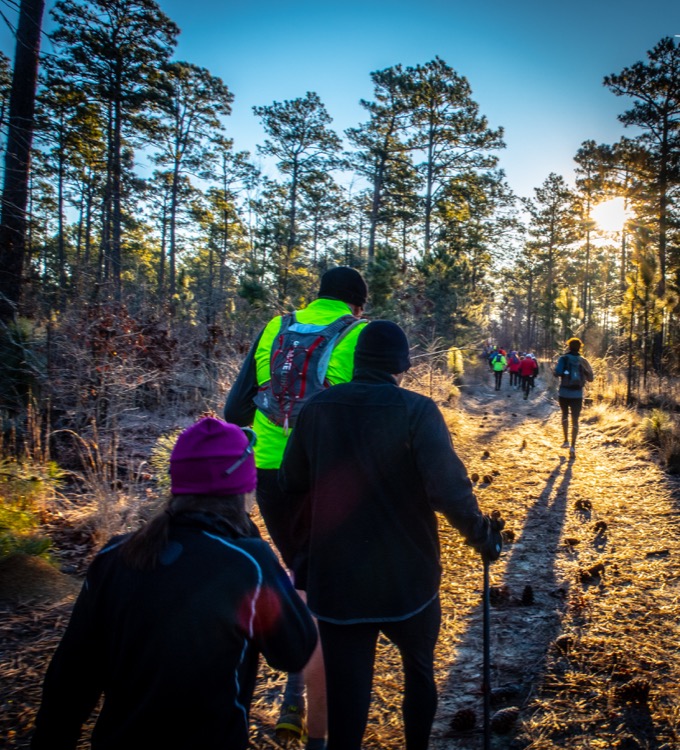 Since losing his sight in Afghanistan, Ivan Castro has been guided by Fred Dummar through 50 marathons, ultras and other adventures. Photo: Beloved Peace Photography

The Mangum Track Club has hosted the Recover from the Holidays Fat Ass 50K, commonly known as the North Carolina Fat Ass 50K, for the past 10 years. Held at Camp Millstone 4H Camp in Richmond County, it consists of three 10.4-mile loops on the North Carolina Game Lands. Like all FA events, there are no t-shirts, no awards and no whining.

The 2019 version of the event began under clear, but very cold skies. The starting temperature was 21 degrees, which warmed up to a comfortable 50 degrees by mid-day. Unlike most Fat Ass events, the Mangum Track Club provides two aid stations as well as timing for the registered runners, and upon finishing, runners are rewarded a potluck meal. Homemade soups, salads and snacks are a welcome sight after 31.4 miles.

As for the trails, they are mostly hard-packed dirt roads with deep sandy areas and of course, a little mud. The trails are surrounded by groves of Loblolly Pines that seem to stretch as far as the eye can see, with a blanket of Wiregrass underneath. Those areas are also home to the endangered Red-Cockaded Woodpeckers. Although there were no woodpecker sightings during the run, some witnessed a few Whitetail Deer on the trails. 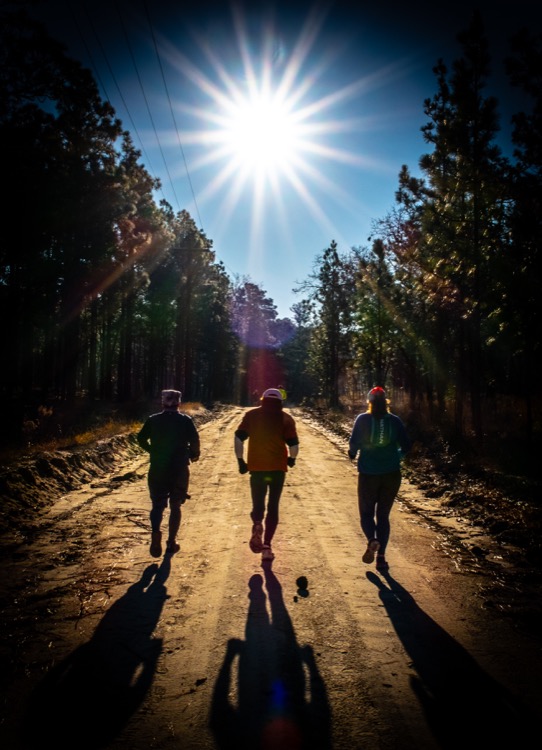 Runners gathered for the start in one of the open fields at the camp. Just before giving the command to begin, a few runners received recognition for past achievements.

Bill Keane of Winston-Salem was on hand for his 20th consecutive North Carolina Fat Ass 50K and at 74- years-young, he just completed his 377th ultra.

Steve Jacobson of Raleigh was also in attendance and was awarded a framed print of North Carolina for completing at least a 5k in all 100 North Carolina counties in 2018.

Once the race started, runners went off into the woods like a herd of cattle headed to the barn until they took the wrong trail and had to be gathered back up and sent out again. From that point, the race unfolded with no casualties or mishaps along the way. Aaron Kramer of Kernersville, NC secured the win with a finish time of 4 hours, 24 minutes. Anna Davenport of Winston- Salem, NC took the women’s title in 6 hours, 13 minutes. By the end of the day, there were 46 finishers out of the 55 starters.

One of those finishers was Ivan Castro of Fayetteville, NC. Ivan was blinded in 2006 during wartime in Afghanistan; he was accompanied by his guide and best friend, Fred Dummar, Colonel Retired, US Army. Both men finished the 31.4 miles in 9 hours and 8 minutes.