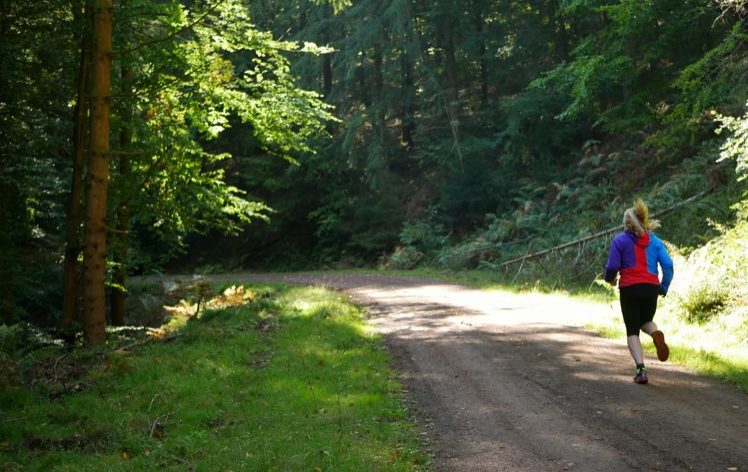 Facing the Reaper and Sticking Up Two Fingers

I started running less than two years ago shortly after my 49th birthday, and being diagnosed with hypertension and borderline diabetes. I lost both breasts to cancer in 2015 and was told I’d need eight more operations. By 2016, I had enough of being unhealthy and overweight, so I decided that life had to change and so did my habits. It was a crisp spring morning when I ventured out into the forest to do the first run on the Couch To 10K app.

There’s a chap at work named James who always looks fit and talks about long runs and food as fuel. I’ll be honest, I thought he was, as my friend Nate says, properly bonker nuts, and I openly scoffed at him. Why would you want to put yourself through such hell?

Six months later it happened. I’d lost weight, the sun was rising through the trees and I was gliding effortlessly over the trail. Everything fell into place. The smell of the pine was intoxicating as I found myself running alongside a herd of deer. The joy of movement, being part of the forest, being alive, and at that precise moment I understood the reason why.

The day came when I confessed to James that I was a convert. Grinning broadly, he very graciously accepted my apology and asked, “Have you read Born to Run?” No, I hadn’t. Needless to say, after a few chapters it made me wonder, could I really run that far? A week later I put the book down – I was going to give it a go.

The next Friday afternoon at work as we were winding down for the weekend, I said to my buddy, “I think I’m going to try a really long run tomorrow,” and left it there. I went home and set the alarm for 3 a.m., packed some food and water in the car and figured out that if I ran five laps around the Severn Bridge it would be 50 kilometers, a good figure to aim for my first long run. I hadn’t done much running on hard surfaces but decided as a lone runner it would be safer than being chased by wild boar in the forest. Hell, I had no idea how long the next five hours were going to be.

Each lap began and ended at my car. It should be said that at this point I had only ever run one lap of the bridge before. The first couple were easy enough. Half way through the third I began to tire. By lap four I was gritting my teeth and had music blaring in my ears to dull the pain, but I was surprised that watching the dawn break brought me the most strength. I admit I walked the last lap – it hurt to run. And I cried when I finally sat down in my car – big fat tears of happiness. It was without a doubt the best moment of my life.

The tumult of the last few years finally caught up with me. Being very stressed, my bowel packed up and a hangover from a troubled childhood reared its ugly head with non-epileptic seizures. Being off work, I was held captive at home and bored out of my brain. Then I found YouTube. There was a world of ultrarunning I had no idea existed. I discovered a community of people with whom I felt an unfamiliar sense of kinship, albeit, virtually. I dreamt of running again and a spark was ignited.

I started running trails again in the spring. Fast forward to September 2018 – my knees aren’t happy and my neck ached like hell (I had spinal surgery in 2010) but I made it to 54 miles, all done solo in laps around my beloved Forest of Dean. Yes, it hurt more than I believed possible, but the satisfaction of facing the reaper and sticking two fingers up was worth every agony.

A couple weeks ago, my psychologist convinced me that moderation might be advised and suggested limiting the amount of running I was doing – around 40-60 miles most weeks. He knows his beans so I grudgingly accepted that maybe it was time to cut back; I’m no spring chicken. I told my girlfriends, and they agreed it was prudent. That night was utter misery and when I did fall asleep, I had a nightmare at 2 a.m. waking up in the cold sweat of a DNF. YouTube to the rescue. A binge of Timothy Olson, Billy Yang, Scott Jurek and The Ginger Runner soon brought me back to my senses. I’d rather face-plant the wooden box wearing my Hokas than spend what time remains looking out the window and wondering what if. My psychologist took the news stoically and made a note in my records.

I dream that one day my body will hold up to Hardrock. In reality, I am happy to go it alone in the forest with my goal being to reach my front door after 100 miles. I shall rage, rage against the dying of the light. And likely be eaten by a pig.

I’m glad you didn’t listen to the psychologist, obviously not an ultrarunners. Never give up 🤗

Thanks Deirdre! Back in hospital but still refusing to give up. Was told to slow down and act like an ill person today, NEVER! 🏃‍♀️

You are a rock star! Sending good thoughts.

To conserve energy, try the American-style one finger.

Your tale moved me. Find a way to keep on keeping on.