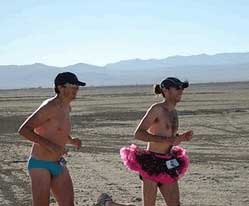 Fabulous Fatass: How to Organize a Fatass

Years ago, I was at a fatass 50k when ultra newbie said, “I’m not telling people I ran a fatass. I don’t like the name.” I probably responded with smacking my posterior, as I’m a big fan of the concept, and the word.

Fatasses are fun. They’re easy (though not as easy as you’d initially think). They’re cheap. Anyone can put one on. Celebrate your birthday, some neat trails, or just get some fun people to get together and run long on a weekend with no other local races.

So why don’t you?

I have put on the Burning Man Ultramarathon for five years, which started as a fatass, and still kind of is, but has grown much bigger. But I also put on a fatass 50k for my birthday, which we ran around the perimeter of Manhattan. (If you’re around next June 5th, I’ll be doing it again, so join me.) While anyone can put on a fatass, there are a few things you should consider as you begin planning.

Fatasses traditionally are free! Awesome. But you might end up shelling out some money (usually more than you expect) – for things like route markers, photocopies of directions, pins and numbers, prizes, aid – though all of these things are optional. If you are going to provide any kind of food or aid, suggest a voluntary financial donation, or better yet, ask everyone to bring a gallon of water and a running snack to share. (I find this suggestion brings some of the best snacks!) Some fatasses also require a beer donation, but of course cider, vodka, and chocolate milk are suitable substitutions.

The route is up to you – and you can pick whatever you’d like.

Decide ahead of time if you’ll mark it, and how you’ll mark it. (Things like flour are easy and don’t require clean-up, but might fade away if they’re used in public places, especially for the slower runners.) If you have turn-by-turn directions, ask a friend familiar with the route to read it over and catch any errors. Add your phone number to the directions, and plan on having your phone on (stored in a Ziploc bag) in case anyone gets lost. Print out enough copies to distribute.

It’s a fatass, you don’t need numbers! If you really want some, write numbes on the side of everyone’s thighs so people can feel like an Ironman athlete. Actually, that’s kind of tough with pants. Race Ready (NFI) offers free race numbers with their advertising, or you could also make your own numbers. I’ve run races that gave the runners plastic bracelets with our numbers. What runner doesn’t want a new piece of jewelry?

It’s a fatass! You don’t need an aid station…but it might be nice. I’ve run fatasses that have had a pile of water gallons under a tree, and fatasses that had all of our donated food and water on a table staffed by one of the runner’s husbands. If you have a non-running spouse/partner/friend (or your teenager that failed chemistry/broke curfew/spoke back), this is a great way for them to spend their weekend – behind the aid station table, feeding sweaty stinky runners. Be sure to give them warm clothes and bribe them with food.

You could also add a place to stop for food on the way – a deli, gas station, whatever. Traditionally, when ultrarunners in New York City run around Manhattan, we stop at Twin Donut on 218th Street. On my birthday 50k fatass, we stopped there so people could fuel up on donuts, bagels, eggs, toast, hash browns, bacon, and coffee. For the record, no one threw up after we left.

If you want people to be self-sufficient, let them know ahead of time. For my birthday 50k, I recommended people wear hydration packs, but we also had water fountains along the way for those who didn’t have packs or ran out of water.

You definitely need to consider insurance and laws. It’s a fatass, you don’t need to do anything…but legally, are you liable?

I put on the ultra at Burning Man, so their insurance policy covers my race. You could always have someone sign in, admitting something along the lines of, “You may die,” though a lawyer might have to verify if that is actually legally valid. (Probably not.)

A lot of parks have rules – sometimes, it’s the number of people running together, or you might need to pay a fee for a certain section of the park. Follow the rules. Be nice and respectful to others in the park. Be especially nice to the park workers. You don’t want them getting angry at you and throwing you out. They might be hungry – why not offer them a delicious gel? Or….maybe not. I think just us runners find them delicious.

Will you do timing? It’s a fatass, you don’t need to. But some do.

Yay, everyone ran. Or they stopped and drank beer/ate cupcakes/took a nap, and that’s also fine.

I’ve run fatasses where people made plaques out of slices of a tree. I’ve run fatasses where I’ve received medals. I have received nothing, and once, I received a sticker. Feel free to give something or not. I’ve seen fatasses that offered shirts at cost to people. If you’re graphically inclined (or that family member itching to help out is), draw up a design, load it onto Café Press, and people can buy their own shirts there.

Post-race, recommend people go to a local restaurant/diner where everyone can gather and celebrate. Visit the restaurant ahead of time to let them know that you’ll have a group of hungry people (um, who might also smell a bit). Recommend that people’s family members meet them there. Then, everyone can hang out in a warm, dry place, eat whatever food they want, and relax.

And then you can really celebrate.

I’ve wondered this before, but what is the etymology of a “fatass” race? Does the term “fatass” have to do with people packing their fanny packs full of supplies when the term originated? Is it because they are lightly organized so the RD is a fatass? I’m curious and an etymology nerd.