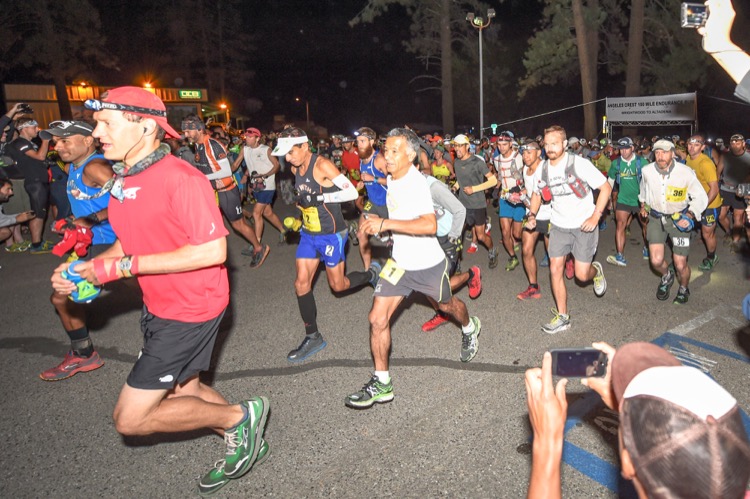 Off and running In Wrightwood

First of all, special mention and congratulations to the women in this year’s race. Two in the top ten finishers and exceptional performances under difficult conditions overall. Their hard work paid off. Outstanding.

This year’s run was very challenging to put on. All time record heavy rains in the San Gabriel Mountains caused mud and rock slides on the Angeles Crest (Hwy 2) and CalTrans closed off our access to the 1st 25 miles of our run until mid August. However, CalTrans worked diligently to try to open the road and managed to re-open Hwy 2 before race weekend. We are grateful to the CalTrans supervisors and workers for their hard work. And this not a first time they helped us. The record rainfall messed up the trails removing top soil and exposing rocks. The high humidity from the lingering storms affected the runners as well. The finish percentage was slightly lower, however some did quite well. The AC100 is a demanding point to point mountain 100 mile run with climbs that continue almost to the finish. That is why the finish cutoff was set to 33 hours from 30 hours back in 1986 our first year.

With 15 runners finishing under 24 hours for the coveted Sterling Silver Buckle, that is a very good result considering the course and conditions. Most notable was that two women were amongst that group, both young mothers with their children present. Ashley Nordell from Sisters, Oregon with a 4th overall finish in 22:35. Second woman in 8th place was Jennifer Benna from Reno with 23:24 with 7 men under 24 hours behind her.

For the men Eric Schulte from Altadena was 1st overall with 19:46 winning the Bronze Ram Award. Last year’s winner Ruperto Romero at age 51 was 3rd overall this time with 20:44 winning the Cougar Award for the first 30+ man. At AC100, when older runners beat younger runners, they take their awards! Michael Carson (age 28) finished ahead of Ruperto with 20:14 in 2nd place.

Ashley Nordell ran a very steady, strong race as first woman winning the Bronze Ram Award. She had won here several years ago. As her husband Josh commented, Ashley was in top condition for this run. Both Ashley and Jenna had small children there with them during the race and Jenna was nursing her child while running the race, while she still managed to break 24 hours, demonstrating again that some ultra women have an amazing durability and endurance. Jenna won the Bronze Cougar Award for first 30+ woman. Cyndi Wyatt won the Bronze Rhino Award for first 40+ woman.

Other note worthy performances include Pete Sercel in 7th place with 23:14 who had a broken leg bone last year, recovered and won the Bronze Rhino Award for the first 40+ man. Jorge Pacheco who has won our race several times and having just run WSER in June still managed at age 47 to place 9th earning the Sterling Silver Buckle.

With fifteen runners finishing under 24 hours earning the Sterling Silver Buckle, several more finished under the time limit for the Second Sunrise Bronze Buckle. Andy Kumeda finished in 26:13 completing his goal for 10 straight AC100 finishes received the Bronze Eagle Award. Joel Livesay was recognized for completing the California Triple Crown of 100 mile races: SD100, SB100 and AC100 in one calendar year. Ninety eight runners finished the run at Loma Alta Park where food was served in a shady grass park with family and friends at the Awards Ceremony. Some very strong runners had trouble this year including missing the aid station cutoff times on the course. Twenty-one runners dropped between Chantry Flats (75 miles) and the finish. Many top runners have dropped at Chantry Flats over the years due to fatigue and other medical problems. The AC100 course is uncompromisingly difficult and relentless with hill climbs almost all the way to the finish. For all the top runners who failed to finish this year and others who just could not put it together this year, there is always next year to look forward to. Point to point 100 mile races like the AC100 can be affected by fire, heavy rains and mud slides but the participants lucky enough to enter know that they will be treated to beauty and challenges of the rugged ANF.

That is why a 100 mile run such as the AC100 is sold out to entry in shorter times every year. A run like the AC100 is possible because of the hundreds of volunteers that come and make it happen every year. No volunteers, no race. This of course includes: aid station workers, HAM operators, medical volunteers, trail workers, course markers and trail sweepers to name a few not including the race managers. The USFS appreciates our hard work on trails, that we clean up after ourselves and we appreciate them permitting us to run this race clear back to 1986. What new challenges will next year bring? We will be ready for it as usual; God willing and the creek don’t rise. And El Nino is coming this winter!

Other well known runners who had challenging outcomes notably, were Katie DeSplinter who through Dom’s coaching reduced her intensity in training and had a very good 29th place 26:30 finish. On the other hand two very good friends and strong runners Jussi Hamalainen and Fernando Garcia stopped at the last aid station Millard campground just a few miles from the finish line. Jussi not having a good day was giving it all he had as usual and fell and bruised his face. Fernando went the extra mile last year helping clear large fallen trees from the course on extra work days. We hope that they will come back and finish their run soon. Tracy Moore well known in San Diego with a long racing history had an entourage of people crewing and pacing him like Scotty Mills SD100 RD. Tracy stopped at Sam Merrill aid station (89 miles). Tom Nielsen, who won the AC100 in 1999 and 2000, paced Ashley Nordell to her 2nd win here.

Every runner has a unique story and we wish we could tell them all. Interesting is how many runners drop out of the race and where. Not at all surprising that 15 runners dropped at Chantry Flats (75 miles) where they can get a ride out. Surprising is that 16 dropped out early at Cloudburst Summit (38 miles) coming up out of hot Cooper Canyon. Nine dropped at Chilao Flats (53 miles). Ten dropped at Shortcut Saddle (59 miles) coming up from Upper Big Tujunga canyon while the descent down the Edison road awaited them. Most are dealing with fatigue and some with stomach issues. With that said, it is important to know that almost half the runners finish in the last 3 hours (over 30 hours) which alludes to the difficulty of the AC100 course.

RD’s are such dicks. Way to try to cover up your sexist views and blatant douchery and lack of caring about the community. Sell the race and move along.