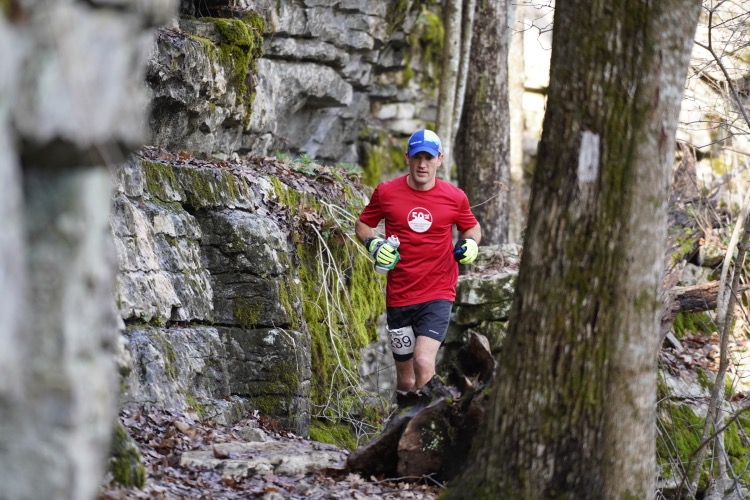 I have been the race director for all 26 years of the Mountain Mist Trail Run. I have seen the 10th, 20th and 25th anniversaries come and go, but none have been more emotional than that of the 26th running.

If you go back 27 years, there were no trail runs in Alabama and no ultramarathons. I’d been running the trails of Monte Sano State Park near Huntsville for several years starting back in the mid 1980s. I enjoyed my quiet time alone in the woods and I always invited other runners to join me on the trails. Some took me up on my offers from time to time, and one of those runners was DeWayne Satterfield.

DeWayne and I had already been running together. We started after we met at work in 1987 and ran with a group that Randall Roland named “Team B.A.D.” B.A.D. stood for: Built Around Distance. Randall was our leader and picked the hardest races with the biggest climbs. A competitive group, we all usually finished in the top of the field. Eventually we had our own uniforms made, with the Team B.A.D. logo of a skull and cross bones.

Even though I was only in my 20s, I realized that Alabama needed a trail run and an ultramarathon. It would be up to me to make it happen, so I met with the Huntsville Track Club and planned the first Mountain Mist. I was a little concerned that no one would want to run it, but after asking around at some of the other trail races, I knew I would get a few runners. DeWayne Satterfield assured me that he would run it no matter what. 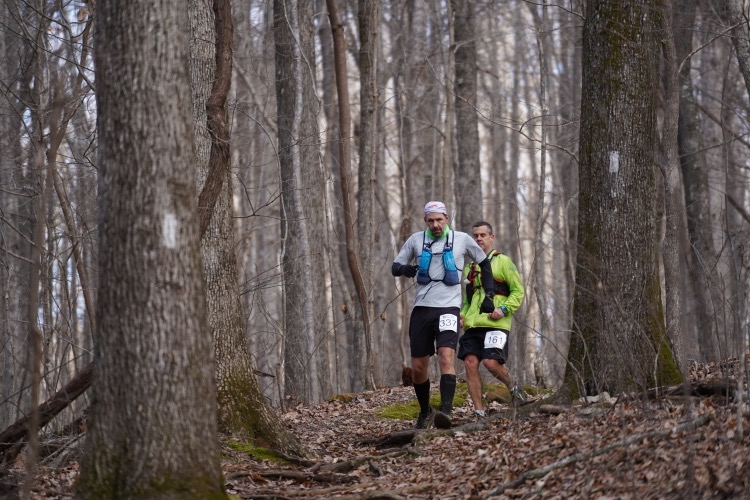 I still remember the first Mountain Mist. The temperature was 13 degrees at the start, and sunny atop Monte Sano. DeWayne Satterfield won that day in 3:49. Year in and year out, DeWayne and a few others would continue to run every race. The longer the race went on, the bigger and more competitive it got. Runners started coming from all over the US to compete on the rugged course. Despite some big names coming to run, DeWayne still continued to win several races. He ended up with nine wins overall. Then age crept in, but he was still able to win Mountain Mist his first year as a masters runner and then went on to win seven masters titles. As a grand master (50-59), he scored a perfect 5/5 titles. Most impressive, not only did he run the first 25 Mountain Mist races, he ran 23 of them in under 5 hours when very few are still breaking the 5-hour mark.

DeWayne ran the Grindstone 100-miler on October 4, 2019. After the race, he did not recover well and just didn’t feel right, so he went to his family doctor for testing. DeWayne was keeping things on the down-low and no one really knew how his health was. I sent him a text on November 6 at 7:07 p.m., “You well now?” One hour later, my phone rings. It’s DeWayne. “Man, you ain’t gonna believe this but I am in the ICU at the Huntsville Hospital.” We talked for a couple of minutes and then he sort of faded away. His wife Cara picked up the phone and filled me in. I don’t even remember what all she told me, but I do remember hearing cancer, which was in his heart. 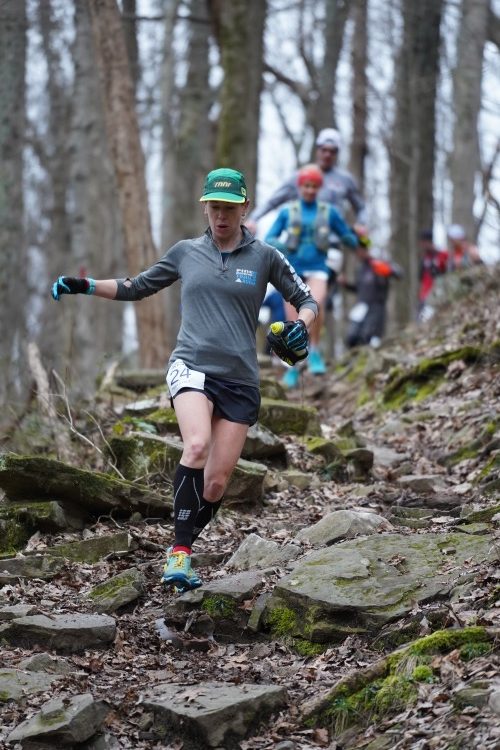 The very next day, I went straight to the hospital. His wife Cara was outside his room, her eyes filled with tears. DeWayne’s two daughters were in route: Peyton from Orlando and Isabella from Auburn University. I could see DeWayne lying in the bed with his eyes closed and he did not look good. I asked Cara if I could go in and see him and walked in alone – his eyes were still closed. I said, “DeWayne, it’s me, Dink, I am here.” His eyes opened immediately. He said, “Man, I’m glad you’re here. This stuff is kicking my butt. I feel like I am at the 70-mile marker of a 100-miler. We talked for a little while about running and Mountain Mist. Before I left, I just held his hand briefly and told him that I loved him. He said, “I love you brother, you don’t know how much it means to me that you are here.”

Weeks went by. He got to go home. He went out and walked two miles and told me it was the beginning of his Mountain Mist training. If he could just walk at a good pace, he could still finish his 26th. The cutoffs are very forgiving and if anyone could do it, it’s DeWayne.

The next thing I knew he was back in the hospital. I decided one Saturday afternoon that I would take my youngest son, Skylor, up to the hospital for a visit to try and cheer him up. We got lucky—DeWayne was alone and in good spirits and we were able to talk for an hour. DeWayne knew my youngest son had fallen in my footsteps, with a love for trail running and ultra-distances. Skylor was surprised that most of the conversation was dominated by ultrarunning and Mountain Mist, but I was not surprised at all. After an hour, DeWayne was tired and needed time to rest.

As the 26th Mountain Mist approached, I knew DeWayne would not be running. The short-term goal was to get him up there for the race and make an appearance. Kathy Youngren started scrambling together ideas to make this race special for DeWayne. We rounded up pictures from the last 25 years and Kathy had a quilt made with the pictures on it. Several of us delivered it to DeWayne in the hospital. Then my wife Suzanne got in touch with Fleet Feet Inc. They had sent a professional film crew in for the 25th Mountain Mist and had complete coverage from last year’s “course description” from DeWayne, something we did annually at the pre-race dinner. We were able to show it at the lodge on Friday night before the race. DeWayne was too sick to make it up, but it was special and Brett Wilks spoke on DeWayne’s behalf. Kathy also had special shirts made with a Brahma bull on it. Often, DeWayne described the traits of a Brahma bull are what one needed to finish Mountain Mist: fierce, strong, brave and full of fire. 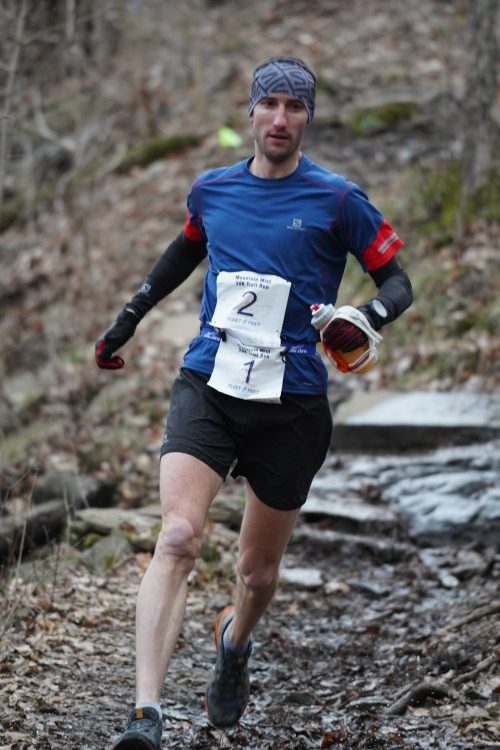 While I was out checking the course with Tom Possert, he suggested that we carry DeWayne’s number from start to finish using different runners. We would carry DeWayne’s #1 from the start, beginning with David Riddle. After discussion with DeWayne, he requested that Riddle carry it the first half to Oak Park and that Brett Wilks carry it to the finish line.

Although my mind had been on DeWayne for this year’s entire race, I still had race director’s work to do. I still had to have a good race. January had above average rain this year and it made for a much slower course. What can you do? You run—that’s what you do. Since when was trail running not about trails, mud, rocks, hills, scrambling up waterfalls and descending into canyons?

It was a good race in the front. Course record holder, David Riddle, was going for his ninth finish and his eighth overall win. He sat back the first half and went through Oak Park in fifth place. The race was being led by Andrew Catanese—the young guy was cruising and leading all the way until the final three miles. You see, Mountain Mist has a little section called McKay Hollow in the final 5.85 miles. It’s the nastiest descent in the race and along with the descent, is a climb back out around the 29-mile marker. Riddle pulled away on the final climb. “That one was for DeWayne,” he said at the finish.

Liz Canty was the clear female favorite and she was never challenged from the start. It was business as usual for her, winning for the second straight year. Liz was also thankful that we had brought so much attention to DeWayne and what he means to the race.

Lonnie Vogan was going for finish number 26, but messed around and crashed on a gravel bike just one week before the race. He wasn’t able to start due to broken bones. Jim Call finished his 25th Mountain Mist and said it would be his final one. We now have three members of the “Hoss Club.” It “only” takes 25 finishes to join. Sally Brooking became the first female to finish 20 – I expect her to be the first female to make it into the club.

The 26th Annual Mt Mist was special. DeWayne’s wife and children, along with lots of friends, were at the finish line when Wilks arrived at the finish with DeWayne’s bib #1. There were hugs and tears, and they even had DeWayne on FaceTime when Riddle and Wilks finished. DeWayne had a glorious day despite the fact that he missed his first Mountain Mist. Thank you, DeWayne, for making Mountain Mist Trail Run special. In your own words, “Best race ever!”