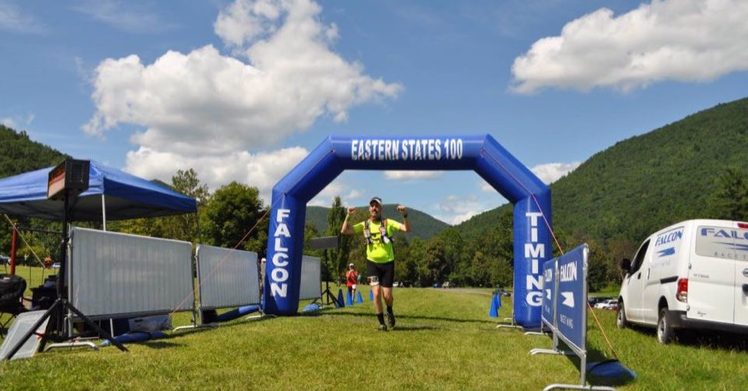 Prologue: 2015/2016
Nestled in the Pennsylvania Grand Canyon, the course is a rugged, relentless, rocky death by a thousand cuts. When you study the elevation profile, do so at your own risk. Those “flats” you see where you plan to make up time? Often they are loose rock and nothing more than a nightmare hopscotch across creek beds and streams. We joke that the state should be named “Rocksylvania” and that we should by default get a large discount on shoes because they just aren’t built for this terrain. What better to run 102.9 miles on though?

In 2015 and 2016 I failed at my attempts to complete the Eastern States 100. There’s a story for each, but the same ending and the truth of failure is always elusive. You can look back, but you’re never truly honest in reflection. Only the you in that moment really knows and that’s your truth to reconcile.

Disappointed and in the throes of existential angst, I went to the finish line both times to watch people finish. As they shuffled, stumbled, glided, and sometimes sprinted down the long grass section of Little Pine State Park, the same questions hit me both years: “What do these people have that I don’t? What inside them allows them to start in the darkness Saturday morning, run all day Saturday, run all night, and then run most of the day Sunday? What am I missing?”

2017
20 hrs into race, 1 a.m. In the darkness the big climbs were so nebulous. I looked up from time to time to see headlamps above me, crisscrossed upward, flickering like beacons. It helped me gauge how far was left to climb.

23 hrs into race, 4 a.m. A steeply-cambered trail, climbing again: I used my hands for many parts, moving over boulders, mossy rocks and downed trees, looking up briefly to confirm that some sick bastard had indeed flagged this hellscape as the trail. Once in a while I’d remark to my pacer, Jason Moss: “This is stupid.” He would quietly agree but always smile.

I saw something out of the corner of my eye. It was a bright white travel camper. I turned my head away from the trail to look at it, but it was gone. Later I saw it again out of the corner of my eye, glowing in the darkness above an 800 foot drop. I spun my head fast to catch it in the act. Gone. For a brief minute my rational mind awoke from its deep sleep and said to me in a school-teacher tone: “Yes, dummy. There’s a floating camper hovering in the middle of the woods. Maybe you should maybe eat something.” So I did.

25.5 hrs into race, 6:30 a.m. We came out to Blackwell in the morning light. Jason and I shuffled to the aid station to meet the crew. It was mile 80. I sat and began to shake uncontrollably. My crew covered me in space blankets and fed me hot noodle soup. For the first time they looked worried. I took off my shoes and requested my blister kit. It was bad and I didn’t want another 23 miles in that condition.

My crew chief handed me a scalpel, saw my shaking hands and suggested we go to the medical tent for help. I declined, rallied my focus and somehow became steady enough to cut and drain a couple of the blisters.

I picked up my final pacer, Don, and left. My crew, Karen and Keilynn watched the ugly trudge back into the wilderness. I was battered, tired, and delusional and it was time to climb again. 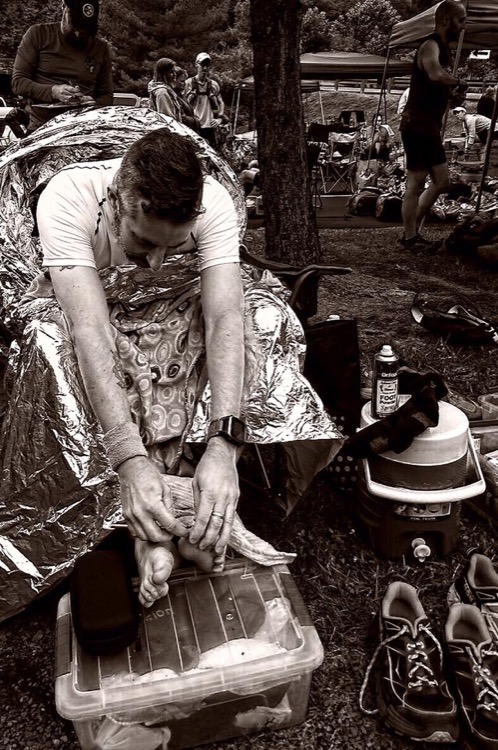 For a moment they just stood there, stunned. The broken-down wreck of a man that hobbled away at mile 80 was now replaced by an energetic carefree doppelganger. When I declined the chair, their routine was momentarily thrown into chaos and they regrouped quickly to address my needs from a standing position. I laughed and told them to relax before bounding away with a pack of blueberry Pop Tarts and a promise to see them at the finish soon.

33 hrs 37 min into race, 2:37 p.m. My pacer was behind me somewhere. He had intentionally drifted away to leave this to me alone.

I was now on that corner before the final stretch to the finish line. I felt a tingle in my nose. My eyes began to well. I wanted to stop – to hold onto this – to take a minute to compose myself, but my legs continued to carry me. I had no finish celebration planned, no iconic pose for the photographers at the ready. That kind of calculation belonged to the person who started the race 33 hours and 37 minutes before. This me, this new one, wet-eyed with a swelling building in my chest, had nothing left of that ego. I was empty, but completely filled at the same time.

The cowbells rang. I saw my wife and the pink-hat-adorned Team Runhole crew. The clapping and cheering continued as I shuffled in a gait that felt like a sprint but looked more like a grateful breakdown. Faces blurred and my heart filled. I ran through the finish gate met by the race director, David Walker, who waited with my buckle.

The questions asked and unanswered for two years crossed my mind. It had taken me all of those hours to find those answers.

What did those people have that I didn’t?

Nothing. They just wanted it bad enough.

Epilogue 2017
A week later it feels like a dream. It continues to sink in. I’ve caught myself many times wishing I was still out there so I could experience it again. I’m not ready to be done with it.

I still find myself reflecting on the dream-like corridors of twisting trails and waterfalls and nearly prehistorical gorges of impossible green stillness.

The memories continue to come back to me and I try to hold on to them and disappear back into the Pennsylvania wilds for a while.

In time I know they will fade, but for now Eastern States 100 exists as a comforting dream that I’m clinging onto as I inevitably awake.

Jon Nicholson is the founder of Runhole.com, a humor-based running website. He’s been running ultras for five years and is a strict pizzatarian.

Well written Jon! ES is definitely a magical race and you really captured it in this recap! Congratulations again, I am proud of you my friend!

Your writing pulled me headfirst, down the rabbit hole, back to the course. Remember the impossibly steep section that was somewhere between, oh..I don’t know…mile 50 and 60? You know the one I’m talking about: The brief section one could only hope to slide down, hopefully feet first, only to immediately be faced with a ridiculously pitched incline back out. Apparently, a switchback would have been too kind. It was to this exact point your writing sparked my memory, illuminating a moment, in retrospect, that defined my experience of Eastern States, my first hundred mile attempt.
I remember falling for the first time here on this section. My feet were already a masticated mess. My blisters had blisters at this point, though I wouldn’t have visual confirmation of this until Slate Run. I remember this moment, almost in slow motion, pitching forward into the empty space, falling hard, then lying, in quite real physical pain, alone, on this rocky, muddy slope.
Lying there, for a moment, I was overcome with a suffocating sense of the futility of my ‘adventure’. Dread seeped in, casting darker hues on the forest already changing color in the encroaching dusk. The possibility that I would fail became very real in that moment. I was just past the verge of tears.
Then, I heard this voice telling me to get up. “Get up, you *#&@#! You didn’t come here, run this far, to quit now.” Or something to that effect was heard. It was my own voice. I may have even said it out loud.
It was this moment that I reminisce now, that your writing prompted, for which I’m thankful, because the resolve that took me across the finish line the next day was forged in that moment. Thanks for letting me relive that almost forgotten moment, and taking me back to Eastern States, to that state of mind, accessible only through the trial of an endurance feat, where reality is somehow more real, if only for a moment.

Been there and done that!

Wow, your story hits home. I DNF’d Eastern States in 2015 and 2016 as well. I didn’t even atempt it this year…but now I’m inspired to give it another go next year. Thank you!

Thanks, all. Yes Kevin, I remember those “rolling hills” very well. Fortunately we had done a training run a month before so I was ready for those. Ha Ha! I did enjoy the look on my pacer’s face though.
Go get it, Shane!!!
We will be doing a few training runs on the course before next year. I’m crewing a friend who didn’t make it this year. Follow us at http://www.facebook.com/runholedotcom
We post group runs there all the time.