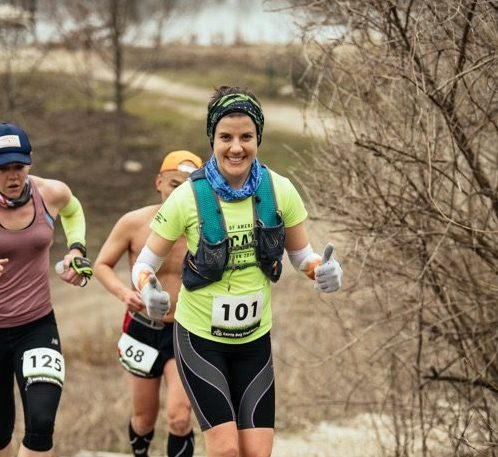 “What do you need me to do to help you get on the podium?” Jeremy asked.

I gazed ahead, almost in tears, as I watched the second and third place girls fade down the trail. They seemed to barely skim the ground as I walked along, trying to will my legs to move.

“I don’t know…” I replied in a choked voice. Just breathe, Becca. “But I will think about it.”

When I first turned to ultras in 2017, I needed the solitude of the trails and long hours to work through some demons. Within that, I discovered an amazing community. This year, I secretly hoped for a podium place and set my sights on Earth Day 50K.

For training, I logged speed work or elevation training on the treadmill. Weekends consisted of long runs on the trail systems surrounding Chicago. Jeremy and I trained together as often as we could, peaking with back-to-back 25-mile trail runs in the cold rain. It would be his first ultra race and I was excited to be there for him.

Earth Day Trail Races, with 5 mile, 15 mile and 50k options, is a roughly 5-mile loop course. There is one aid station at the start/finish line, where most of the spectators also stay to cheer. Some November Project friends set up a roaring cheer station halfway through the loop for another boost. 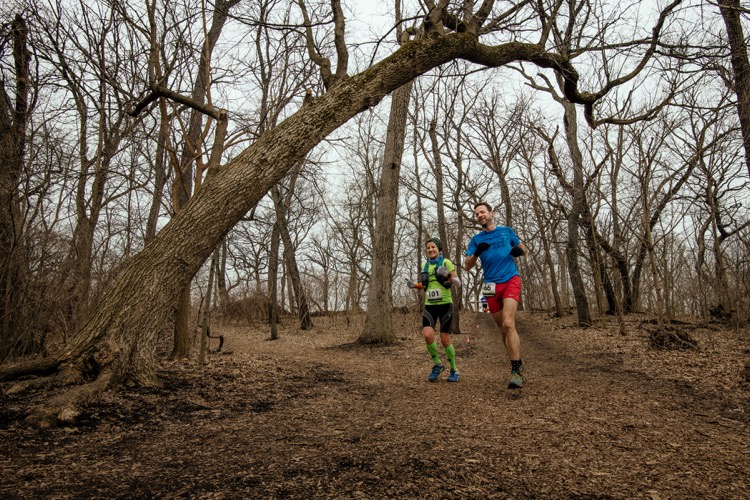 The start of the race was packed as the all distances begin together. Jeremy and I completed the first four loops in what I can only describe as the “flow” state – feet dancing over roots and rocks, eyes focused on the trail ahead but mind blurred. Our only focus for the first few loops was trying and failing to get a jumping photo when we passed the race photographer.

As we began the fifth loop, my quads went from fine to angry within a mile. Why, hello there, Bonk. I was reduced to hiking up the inclines and eventually to walking the flat portions as well. Lofty podium goals slipped through my fingers as runners passed. My mental strength waned. What If I stopped after five loops? I told Jeremy to keep going without me, knowing that he was still feeling strong, but he stayed.

“Come on, Becca, it’s just a few more miles. You’ve done this thousands of times and can do it again. “ 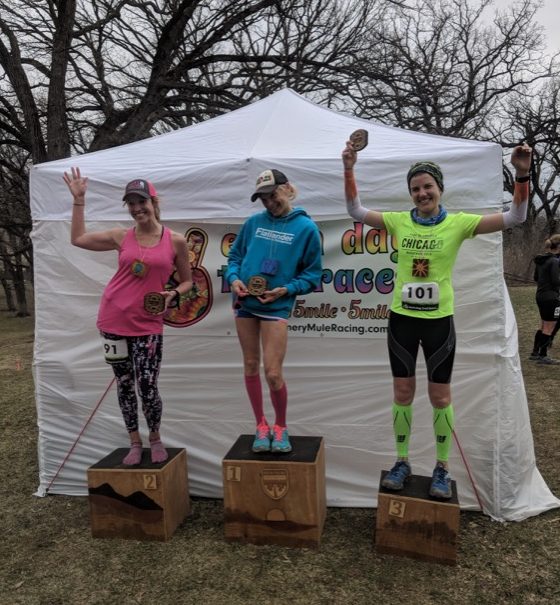 He helped coax me along, peppering me with support, encouragement and hilarious stories about his daughters. The November Project cheer station boosted us through too. Together, Jeremy and I crossed the finish line and immediately hugged. Exhausted, elated and beyond grateful. I had made it back to third place, and Jeremy also won some hardware – the Ultra Virgin Award for fastest male newbie and an age group award. Ultrarunning can be a solo sport, but we’re all better, fitter, faster, stronger, when we’re together.

GREAT JOB BECCA! I loved sharing the podium with you!