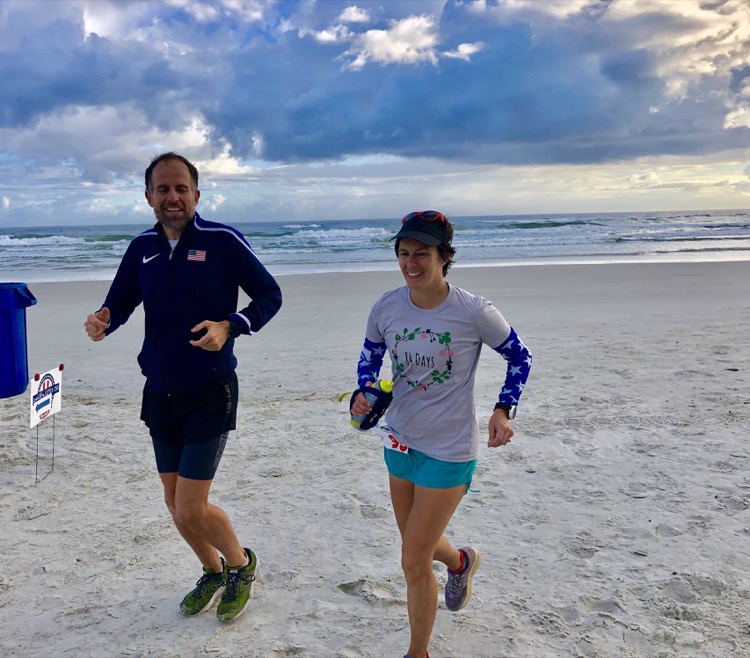 The Daytona 100 is an early December road race that starts at Atlantic Beach in Jacksonville, FL, and passes through a myriad of northern Florida locales: Ponte Vedra, St. Augustine, Marineland, Flagler Beach, Volusia County, Ormond Beach, Daytona Beach Shores to Ponce Inlet – mostly on road via scenic A1A. Over the first 50 miles, I felt strong, clear and focused on moving ahead as we traveled through sleepy beach towns, running on desolate roads and sidewalks. After we passed the aid station at mile 50, we ran for a stretch on the shoulder of the road, against traffic with car headlights coming at us as the sun was setting. There were stretches in the darkness when I was running along, taking in the festive holiday lights adorning houses, that the thrill of the adventure permeated.

Around mile 60, the pain on the back of my ankle set in. At times it moved up my calf, creating numbness that was not new. I was meeting my friend and long-time running buddy Chris Goudreau at mile 70, so I had incentive to move as quickly as possible. I intercepted him at an aid station run by Badwater 135 Race Director, Chris Kostman. By the time I arrived, I had taken two Advil to mute the pain, which had grown severe, and was reduced to walking. 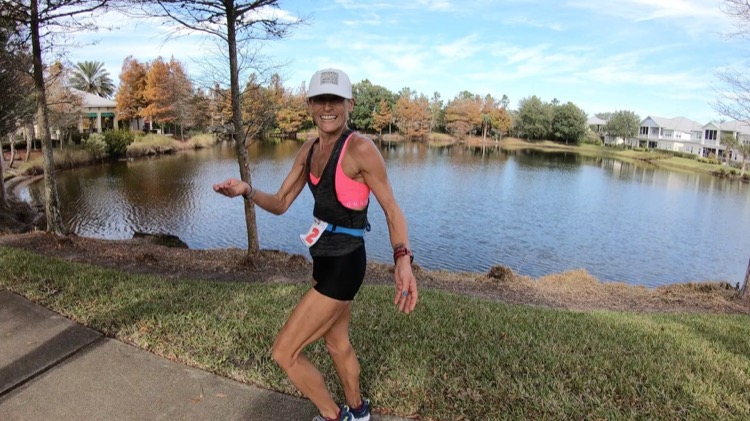 Lisa DeVona on course. Photo by Hunter and Harrison DeVona. 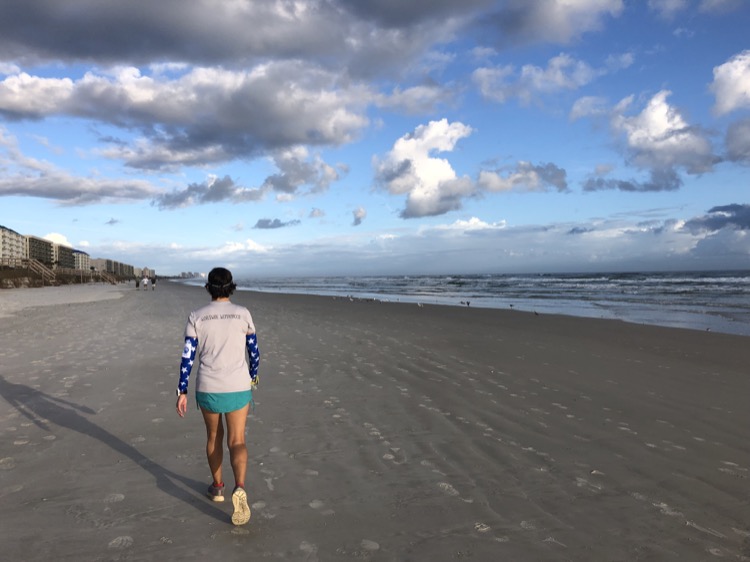 By mile 80, when we arrived at the next aid station, my ankle – or what I had realized was my Achilles tendon by then – felt worse. Every time I tried to run, the pain paralyzed me. I had help wrapping my ankle and the reassurance that if I had torn something, I wouldn’t be able to walk. This was the hardest stretch for me, but Chris and I walked with a purpose, stopping at convenience stores to replenish our food.

I was beyond grateful to have Chris with me. He was able to keep us going as we passed some scary Daytona characters, and told me not to worry when we intercepted a police chase for teens who had skipped out on a bill at an IHOP. Whenever I would start to feel the acuteness of my injury, he reminded me that complaining was a waste of energy, to keep moving forward, and that I was going to be fine. Considering that Chris was dealing with his own hip injury as he walked alongside me, I was able to accept his advice and plod along. 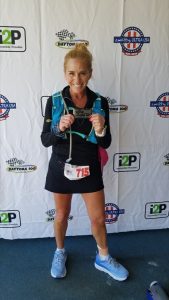 Somehow, the hours passed and then it was daylight, with only a few miles left to the finish line. The last two miles we ventured onto Ponce Inlet beach, where the sand was white and firm, and the waves cascaded the shore. I was able to jog a bit, knowing that the end was near and when we reached the finish line, the magnitude of the journey was lost, replaced by smiles and laughter, and a feeling of gratitude for the ability to stay with it and finish something that I had started some 27 hours before.

In a world of conveniences – people to deliver us food, Ubers to take us where we have to go – why take on hard challenges? Why do things that are hard for us emotionally, mentally and physically? Why go out there and fight battles when we don’t have to? Perhaps because races give us space and time in our lives to self-reflect and force us to acknowledge how we deal with adversity. Perhaps because doing hard things teaches us to be better people. Perhaps because in the pain, misery and torture that we face in these abbreviated and self-imposed adventures, we grow empathetic and remember that we are all in it together, from the first person to the last person crossing the finish line. Hard things are hard – but they also make life easier.

Outstanding finishing with all those issues. It never ceases to amaze me how heroic regular people can be. I’ve had to postpone my Keys100 attempt twice due to injury, but I signed up for the 2020 Daytona 50 and hopefully will be a injury free training run. Thanks for the inspiration and hope to see you there if you plan on running Daytona again.

Thanks for sharing your story with us! It’s inspiring, and I admire your grit. I was out there with you that day. Keep getting after it!