It’s the middle of the night in Coney Island and with over 80 miles on our legs, Rob and I are feeling it. We drowsily exit the boardwalk under the parachute jump and stop off at a lonely gas station for some coffee. I pour us two cups and go to buy them but no one is behind the counter… or anywhere else for that matter. Is this place deserted? Had a disgruntled worker finally had enough and decided to quit on the very night we needed to be rung up for our race-saving coffees?!?

I give a holler throughout the place and just as we’re about to give up, an apathetic worker moseys out from the back. He looks at us: a sweaty mess of ankle gaiters, hydration vests, knee high compression socks, wide toe box shoes… just a couple of over-eager run bums fresh off the freak train in old Coney. No big deal.

I add a 5-hour Energy shot to the order, chugging it as we head outside. Rob takes a sip of his coffee and instantly vomits all over the sidewalk. In a sleepy daze, I tell him this is a fine moment in the sport of ultrarunning and he should be proud of his contribution to it. He eases back up and with a sour face we continue on. 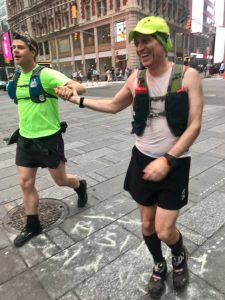 John and Rob share a laugh at the finish line. Photo: Trishul Cherns

A few miles later we’re moving like two bedraggled slugs along the waterfront, about to pass under the Verrazano Bridge. With only two hours of sleep the night before, my eyes won’t focus in the dark. They keep rolling around in my head as I weave side by side past a line of park benches.

“I have to sleep. I have no other choice.”

A giant rat crosses our path and scurries into some brush.

“Believe me, you don’t want to sleep here,” retorts Rob. “Try flashing your headlamp into your eyes. It will stimulate your optic nerve and trick you into thinking it’s daytime.”

In desperation, I take it off and do so, shrieking as I blind myself with kaleidoscopic visions swirling into the glowing lights of Staten Island across the water reflecting off the low drooping fog. Am I still at the Coney Island carnival?

A little further down, I’m somehow in worse shape and declare I must have one minute to close my eyes. Rob relents and says he’ll wake me up as I lay out in sweet relief on a dingy bench.

I jolt up with a newfound rush of adrenaline and confusion as Rob tells me he figured I needed a little extra shuteye. As we amble onward, I have my energy back, but now our roles have flipped as the sleep monster begins to overtake Rob. And so it goes. As Yogi Berra says, “You’ve got to be very careful if you don’t know where you are going, because you might not get there.”

Eventually… somehow… we would get there.

Trail Etiquette: How to Be a Better Person on the Trails