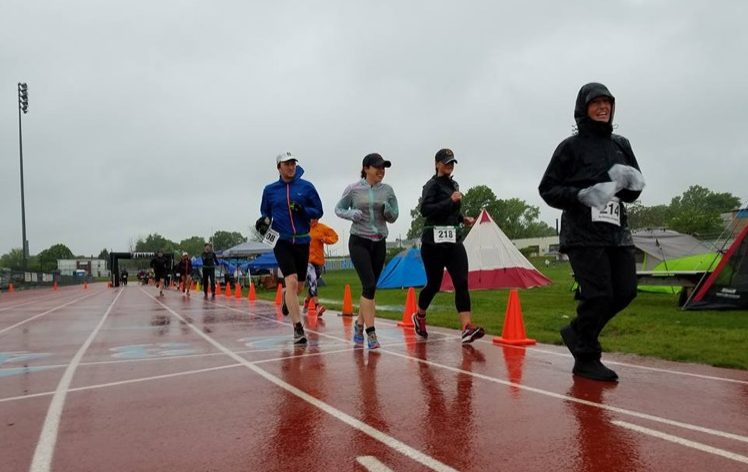 A lone figure walks the track at Academy Park High School in Sharon Hill, Pennsylvania, pulling a green wagon full of orange cones and placing one every few feet along the inside edge of the track to prepare for this year’s Dawn 2 Dusk 2 Dawn Track Ultra events. It’s 1 a.m. and has already started to rain.

The runners started to roll in around 5:30 a.m., setting up their campsites for the long day ahead. Everything is tougher in the rain, and the forecast predicted a lot of it. Cool conditions are usually preferred by runners, but cool and wet isn’t for everyone. In past years the race has had hot conditions which hampered performances and had sent some runners to the hospital with heat exhaustion and dehydration. This year hypothermia was a concern.

In the 50k race, Joshua Finger, 44, from Spring City, Pennsylvania, set a blistering pace from the start that was untouchable by the rest of the field. Josh likes the rain and always seems to run well in it. Suzanne Irvan, 42, from Downingtown, Pennsylvania, also set a steady pace fighting her way through the cold rain. Cold, rain and wind aren’t Sue’s ideal running conditions, but just like her performance at the 2015 Boston Marathon which had similar conditions, she was prepared for the worst and wore the proper rain gear to stay warm and dry.

These two athletes stayed on course all the way to victory. Josh finished first overall with a time of 3:31:17 followed by Sue, second overall with a time of 4:43:32. This is Sue’s hat-trick performance also taking the win again as Delaware County Road Runners Champion. Both Josh and Sue have been running at D3 since the races reemerged in 2014. 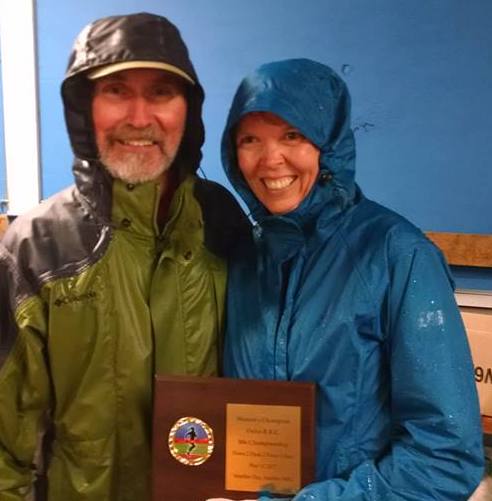 Runners-up for the 50k were Eric Mundy, 36, from Glendolden, Pennsylvania who placed third overall and second male in 5:10:24, and Danielle Covarrubias, 26, from Goodyear, Arizona in 6:14:55. While Danielle was running the 50k, her dad, Tony, was running the 24-hour race. Mundy, winner of the Delaware County Road Runners Championship was followed in the 50k by his dad, Byron Mundy, 69, from Collingdale, Pennsylvania in 5:39:40. How cool is that?

It was a busy day trackside as the rain continued to fall while the 50k runners were finishing up. Many grassy areas flooded, hampering crews and volunteers throughout the event. Even Mike Melton’s timing area was partially under water.

Valley Forge Military Academy cadets volunteered during the entire event helping runners at the hydration stations, food tent and the kitchen. They showed how dedicated they were to the cause throughout the day as the rain fell, even though their campsites had to be moved to higher ground. These kids showed true courage in a tough situation.

For a few the weather wasn’t much of an obstacle. Tara Langdon took charge early in the 24-hour race. She was being chased by Dave Johnston, Tiger Ellen, Connie Gardener, Deb Horn and the rest of the extremely talented field. During the last five hours many positions changed. Langdon, 35, from Lumberport, West Virginia stayed steady the entire event and was the overall winner with 132.72 miles. She set a personal best from her 2015 performance at North Coast 24-Hour.

When asked about her race, Tara had this to say: “It was a totally imperfect day for attempting to run the perfect race. But this event is put on so well, so much attention is paid to detail, that even in the worst conditions, you can still do amazing things. I didn’t really have a plan. How could I plan with the torrential rain predicted? So I went into this race with one strategy, to just run as hard and fast as long as I could hang on. And this resulted in a really wild ride! D3 lives up to its motto of being a race by runners, for runners. They make sure you have everything you need to reach your goals, and they work hard to achieve that. It is a class-act race for those seeking new records or PRs.” 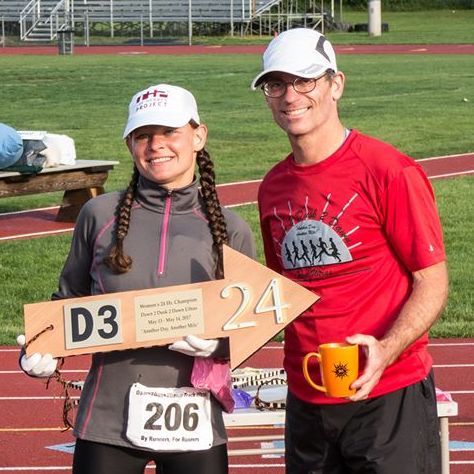 David Johnston, 47, from Willow, Alaska, chased Langdon all day finishing second overall and first male with a distance of 117.81 miles. Dave had this to say about Dawn 2 Dusk: “The first year I ran D3 it was the hottest I have ever been in my life; this year it was the wettest, but what keeps me coming back are the people. Great runners and great organizers make this race a highlight of the year!”

Tiger Ellen, 43, who lives in Brooklyn, New York, but was representing Vietnam here at D3, finished third overall and women’s runner-up with a distance of 115.07 miles. Tiger charged hard the last few hours of the race moving up and snagging third place. Kyle Lemke, 27, from Brea, Ohio, held off Ken Arble for second place male with a distance of 100.91 miles.

The 12-hour runners, who started at 7 p.m., had it a bit better than the 24-hour and 50k runners. The rain had slowed compared to the monsoon earlier in the day. Maria Shields, Tom Dekornfeld, Liz Bondar and the rest circled the track to chase their goals. This field of 12-hour runners was much closer in mileage than their 24-hour counterparts. With five hours to go, the rain stopped and the winds picked up just enough to dry things out.

It was a good day for the 12-hour runners from the state of Maryland. Maria Shields, 66, from Davidsonville took the top spot with 60.6457 miles. This is a new American Record for the 65-69 age group. I asked Maria what she was thinking the last two laps of her race and she had this to say: “I asked my mom to help me through to the finish. She’s always with me. And all the screaming from you Josh, not to give up. If it wasn’t for you on those last two laps I wouldn’t have gotten the record!” 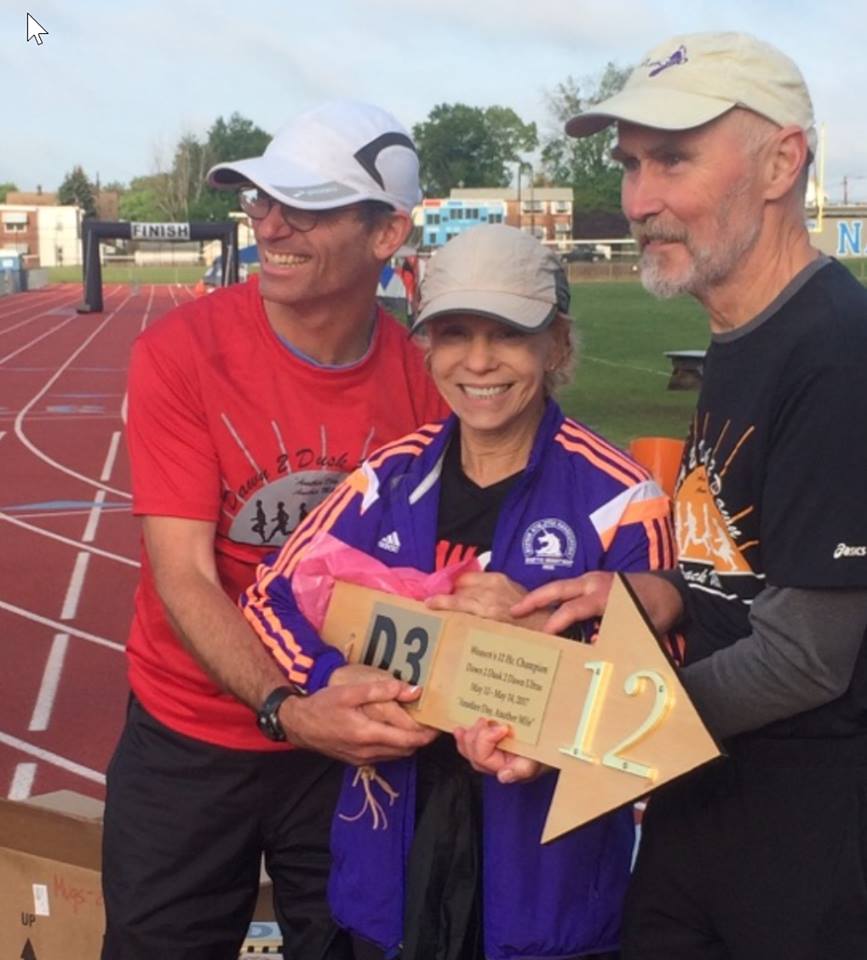 Tom DeKornfeld, 64, of Annapolis, Maryland finished first male and second overall just behind Maria with 59.403 miles. Terri Lemke, 64, from Loudonville, Ohio took third overall and second woman with 54.92 miles. This adds to the D3 family affair since her son took the runner-up spot for the men in the 24-hour race. Gregg Ellis, 46, from Calhoun, Georgia, was the men’s runner-up with 51.20 miles. We at D3 wish him well on his “Journey of Hope” run later this summer.

There were lots of family connections other than the ones mentioned above. Dave Johnston’s dad Frank Johnston ran the 50k and Bryan Foster and his son Sam ran together in the 24-hour. 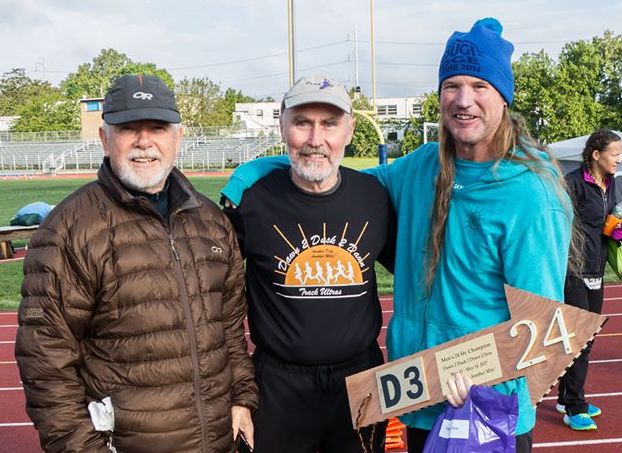 Bill Schultz and I spend the year doing our best to put on a quality event. We add all the things we would want to see in an event that we would run in ourselves. We truly believe this is a race “For Runners, By Runners.” See you next year and happy running!