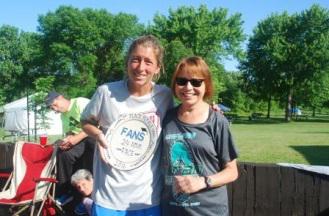 For the last several years the weather gods have frowned upon the FANS 6·12·24 Hour Race, sending us wind, rain, and demoralization. On the 4th and 5th of June we had a total of 0.06” of spritzy rain, overcast skies, one wind gust of 25 mph, and a high of 73°. The field of 141 runners and walkers took advantage.

In the 24-hour race three-peater Courtney Dauwalter cruised through 135.7 miles to lead the entire field and safely eradicated Sue Olsen’s 1994 record of 130.8 miles. With one break around 12 hours, she averaged a bit over 22 minutes for each 2.14-mile lap and actually sped up during the last three hours of the race. Sonya Decker pulled off 107.8 miles for second place, followed by Heather Kick-Abrahamson with 101.7 miles that won her the 500 Cumulative FANS Miles vest. One the men’s side, Doug Kleemeier dug deep and covered a PR 132.1 miles, scoring his own 500 mile vest and winning the 1st place male award for the fourth straight year. He was trailed by Sean Faulk with 114.7 miles and long-time FANS participant Jerry Heaps with 110.9 miles. The walking division found Jerome Young in 2nd place with 70.1 miles, and Radek Lopusnik on top with 80.8 miles. Radek had something to prove this year: his 2015 race was side-tracked by an injury so he put in multiple shifts volunteering instead. Clearly karma was at work in 2016.

The start line: where all things are possible.

Michael Bialick of Minnetonka, Minnesota (not to be confused with Michael Bielik of New York, who logged 109.0 miles in the 24-hour race and caused great delight along the course with his ever-present purple tutu) wanted to set the 12-hour course record and succeeded admirably, pounding out a blistering 91.3 miles before the cowbell sounded to end the race. Steve Peterson’s record of 87.3 miles from 2004 is no more. Marcel Thielke hit 76.9 miles and Kelcey Knott ran 66.7 miles to round out the men’s award-winners. In the women’s race, Keri Peterson apparently decided her pre-race goal of 55 miles was too easy, and cranked out 64.4 miles to garner the only “100 km in 12 Hours” shirt in her division. In her first ultra, Rachel Polski snagged hardware with 60.0 miles and Amy Clark took 3rd place with 56.5 miles, almost doubling her cumulative FANS mileage. Elizabeth Swartout walked 41.9 miles to lead the 12-hour field, with Phil Aaron close behind with 37.2 miles and Annette LeDuc adding 36.0 miles to her FANS mileage total.

Michael Bialick closing in on a new course record for the 12-hour.

On the medical side of things there are two stories that champion the human spirit. Sue Olsen missed out on a 100-mile sweatshirt for the second time in her 26 attempts at FANS. She took a large spill about 32 miles into her race and suffered severe lacerations, was cleaned up in the medical tent and sent on to the ER. Like the true warrior she is, she showed up at the awards breakfast Sunday morning with her new pink arm cast to pass the course record torch to Courtney Dauwalter. A little over two years ago Ron Wilmoth of Fullerton, California suffered cardiac arrest after a training run and lucked out: CPR was administered swiftly by a park ranger, fast response by EMTs, and a local hospital capable of lowering his body temperature to prevent further brain damage. In his first ultra after that episode, he completed 35.9 miles, accompanied by daughter Shannon in her first ultra, hitting 40.2 miles with only five laps away from her dad’s side. Our bodies may be more frail than we’d like, but there is nothing wrong with our determination.

FANS has been described as “a weird sort of carnival” and if this is what it takes to keep participants going, we’re all for it.

During the awards ceremony we handed out seventeen 100-mile sweatshirts, four 100-km T-shirts, and three 500-mile vests to Doug Kleemeier, Heather Kick-Abrahamson, and Mary Croft. Our other metric of success, the amount of money contributed to the college scholarship fund the race supports, will have to wait until the pledges are logged and totaled. In the past 26 years the race has generated over $1.1 million for use by inner-city students, leading the year-round race committee to wonder if we’re putting on a competition, a fundraiser, or a family reunion. Probably all three – join the family on June 3-4, 2017, and see for yourself!