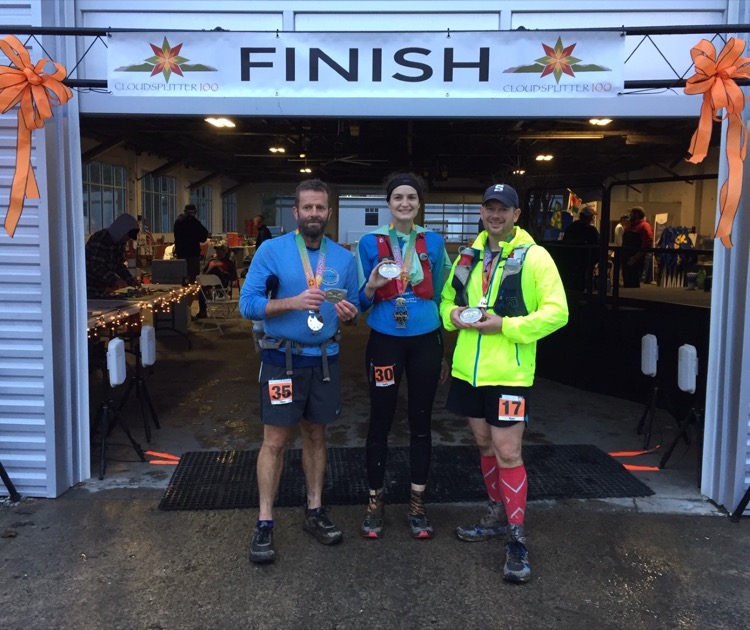 Cloudsplitter 100: Mountains in the Mist

When the race weekend kicks off with pizza and bluegrass, you know you’ve come to the right place. Inside the city of Norton, Virginia’s Farmers Market, the Cloudsplitter 100 pre-race meeting included a warm welcome from the City Manager, a quick rundown on local flora and fauna from the regional wildlife officer, and an overview from the RD. Next year promises to include more shenanigans with the opening of a cidery/brewery. Sadly, folks kept it mostly civil this year.

The following morning, a blast from a local scout’s muzzleloader kicked the race off under heavy-misted mountains. After a short run through town where the streets were blocked and EMS, fire, and police all waved while bidding us good luck, it was up, up and away into Jefferson National Forest. Chatter from old and new friends woke up the mountain as we climbed up winding sections of single track. Let’s be honest, a good deal of pizza “de-gassing” was going on, too. Arriving at Benges Branch and High Knob, some great views wouldn’t be available the first time through due to cloud cover but lifted spirits much later in the race when the, ahem, “smoke” cleared.

Dropping down to High Knob rec area and starting our east-west out and backs, the aid stations started becoming familiar. Each visit was prefaced with liberal cow bell, even in the dead of night, and the local folks really made us feel at home in their mountain range. Early on, the trail was only slightly technical through the wooded hills, but the east-west out and backs had quite a few sections where jagged, rip-rap style rocks slowly wore on the feet. As a relief, foot baths were provided via lots of knee-high water crossings that were deep enough to prevent dry socks. The course was absent of large climbs in this middle section, but the technicality slowed things down.

Reaching the far east, a pre-race rock slide had closed the trail and the work around the trail’s end was guarded by a romance novel that you owed the preceding aid station a page from upon return. My choice was page 664, a tale that detailed heroine Clara’s late-night encounter in the railroad boxcar, and got the runners I was around laughing for a few miles. The the aid station workers also seemed rather involved with it when we left.

After completing the first east-west section, roughly half of it was it runnable again, this time with the lights completely out as the moon yielded to the stars. Darkness remained as some light rain fell in the early hours, although the temperatures never dipped into freezing. The selfless aid station volunteers at Bark Camp and Edith Gap beat off any cold with warm campfires and snuggle dogs who ostensibly fought off the local Bigfoot variety known as a Woodbooger. In reality, I think most of the pups just wanted your moon pies, potato soup, or fresh spinach and egg burritos. Seemed like a fair trade to have them wag and let you give them a pat. The night wore on and was a repeat of roots, rocks, and a few water crossings. 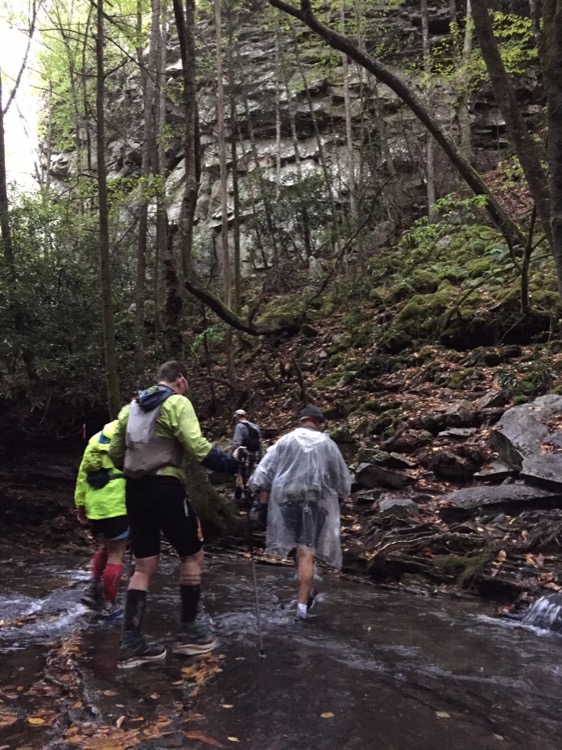 When finally leaving High Knob after the third visit, a long gravel road led runners south toward the Devils Fork trail which we all owed two, 7 ½-mile loops on before we could point north and head home. Half the loop was rooty and rocky but runnable, a quarter involved big stream crossings with gorgeous waterfalls, fixed-rope narrow paths, and features such as Devil’s Bathtub. The last quarter of the loop was a near two-mile effort of helping Sisyphus push the boulder up a hill. While the hill was a smooth-graded dirt road, it also had 1,200 feet of gain in just 1.7 miles. But the folks at the aid station just prior to the hill were awesome, and the porta jon had two-ply paper!

Following a two-loop dance with the devil, it was a climb from 1,600 to 4,200 feet back to High Knob. Despite multiple shoe and sock changes, macerated feet that had pounded on sharp rocks became the late race booby prize for many. Nothing terribly funny to report on this section. It was work time and the smell of the finish was starting to waft. Or maybe it was more of the pizza problem?

With a general downhill for the last 8-9 miles leaving High Knob, stepping on squishy mud to alleviate foot pain while balancing so as to not to slide downhill and land on your backside became the game. From the number of mud-covered bottoms at the finish, plenty of folks lost that battle.

Returning to Norton, a few road minutes led back to the Farmers Market and the ever-smiling City Manager and race officials who had hugs, congrats, buckles, and medals to go around. As we pulled for our brothers and sisters still fighting on the trail, more local pizza pulled us toward a deep mountain sleep that was the final prize during this great weekend.