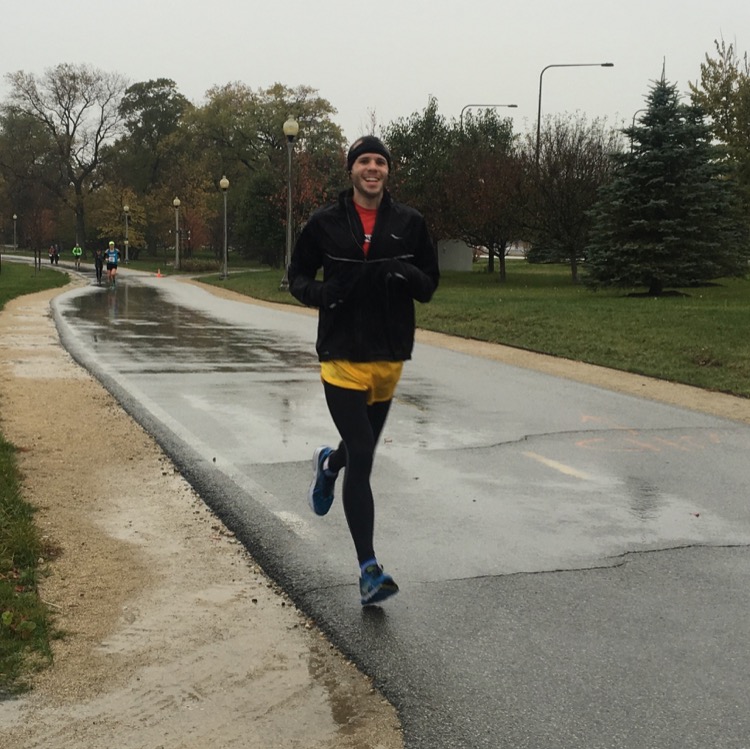 “That was one of the hardest races weather-wise in our history,” said race director Pat Onines the day after the Chicago Lakefront 50/50. “If you showed up yesterday, we salute you. It says a lot about you and your character.”

Why do we run ultras? Some, like Zach Bitter, run for records, like the blazing 5:12:36 he ran here in 2013, the fastest U.S. 50-mile time of the century. For others, the answer is harder to pin down. If it is about the challenge, though, in 2015 Mother Nature obliged.

The Chicago Lakefront 50 winds along our world-famous lakefront path, with views of Chicago’s skyline, the sixth-largest freshwater lake in the world, harbors, parks and prairie preserves. Normally considered one of the fastest races in the U.S., the course bared its teeth. October 31, 2015 was not to be a record day.

As Scott Handley, first-time 50-miler, put it: “The weather was supposed to be sunny with a high of 65. ‘Perfect!’ I thought. As the forecast slowly became worse and worse, my anxiety level climbed higher and higher.”

The wind and rain weren’t apparent to the field until they reached the turnaround for each of the 50k’s three or 50 miles’ four laps. Bill Kotaska, our 50-mile winner, explained, “The wind was at your back running out so you built up some body heat. Unfortunately, coming back was a different story. It didn’t take long to lose body heat running into the stiff, cold wind.”

On a challenging day, the support from other runners made a difference. “The people were the best part,” said Chris Patrick, our 50k women’s champion. “I’ve never run such an intimate race. The out-and-back fosters such sweetness! It made me so happy to see all the brave faces. I tried to smile or wave or throw a thumb’s up at everyone, like, ‘Let’s just enjoy this.’”

The ultrarunners were not alone. “It’s not every day you see a four-headed dragon or a vampire in a tutu running along the lakefront path,” said Kotaska. Several thousand runners, many in costume, ran a Halloween-themed race along the same path.

Although they may have presented a running challenge, the many costumed runners were a welcome diversion. “The time running with those monsters was possibly the most enjoyable of my whole race,” said Handley.

By the final lap, the wind-driven rain off of Lake Michigan had grown into a squall. As a first-timer at this distance, Handley stated, “I was just about ready to quit. I was cold, wet and tired. I could hardly move.”

Chris Patrick moved into first for the women with 10 miles to go and, somehow, picked up her pace and finished as the 50k champion. Fifty-mile winner, Kotaska, at 53, persevered: “I am a native North Dakotan and am going to credit my survival in this race to the northern blood in my veins.”

After the leaders had changed into dry clothes and warmed on accomplished ultrarunner Beth Onines’ famous red beans and rice, Handley reached the turnaround and faced a final leg into the teeth of the storm. “The rain grew heavier, as did my legs. All I wanted to do was stop running.”

Why do we run ultras? Scott Handley speaks for many of us.

“This race was definitely one of the most difficult experiences of my life. I’m so thankful that through the support of my friends and the amazing volunteers that I was able to cross that finish line, and call myself an ultrarunner.”

On behalf of the field, a special shout-out to Pat and Beth Onines and all the ultra volunteers for their calm in the face of the storm, and their support on such a challenging day.