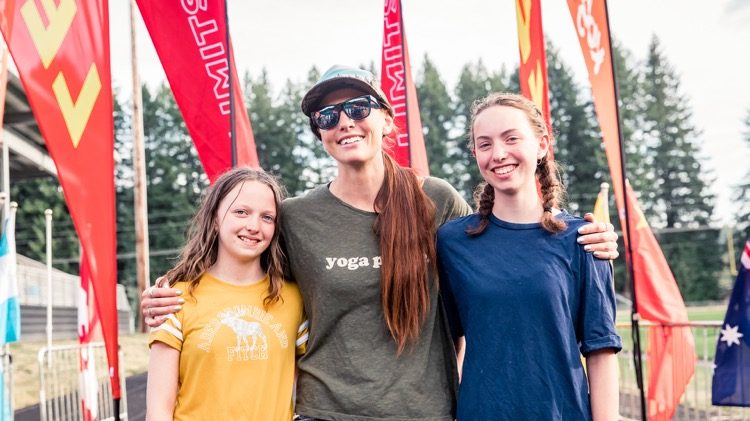 Six hours into Candice Burt’s 16-hour drive to Death Valley, California, from her home in Leavenworth, Washington, she received the news that most of us in the ultrarunning community have been experiencing lately: her upcoming race, the Badwater 135, had been officially canceled.

Within moments of receiving the heartbreaking, yet foreseeable update on her goal race for the year, Burt pivoted in one of the most remarkable bouts of adaptability an athlete could ever do.

“I thought about it for maybe 10 minutes in Pendleton, Oregon,” Burt said in a recent interview. “Then I reset the GPS slightly to visit a friend in Truckee.” Originally she’d planned to spend the week adapting to the heat in the Badwater Basin before the race start on July 6, but instead, she spent a week at altitude in Lake Tahoe for her new goal: the 171-mile Tahoe Rim Trail (TRT) unsupported fastest known time (FKT).

“I try to not take any challenges and put any weight on them, and once I heard the news from the Badwater Race Director Chris Kostman, I was actually even more excited about doing the TRT. It was clearly meant to be.” This was Burt’s fourth attempt at the trail that circumnavigates Lake Tahoe, North America’s largest alpine lake. 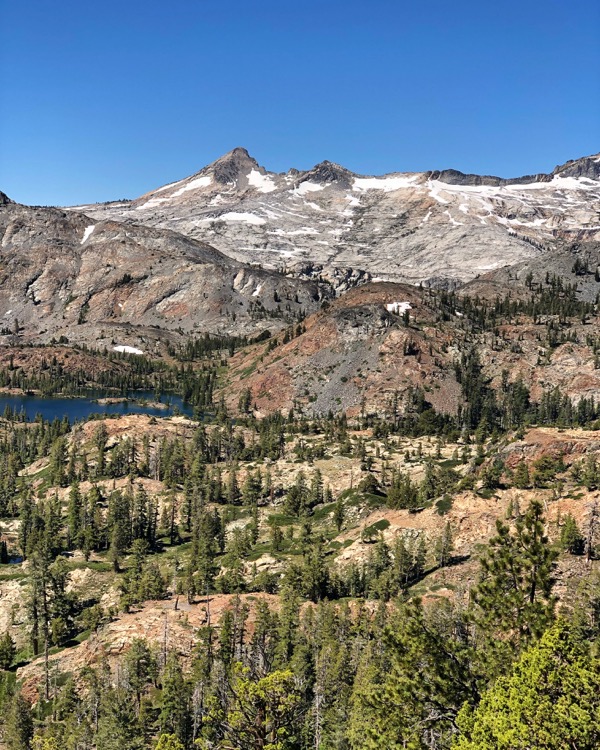 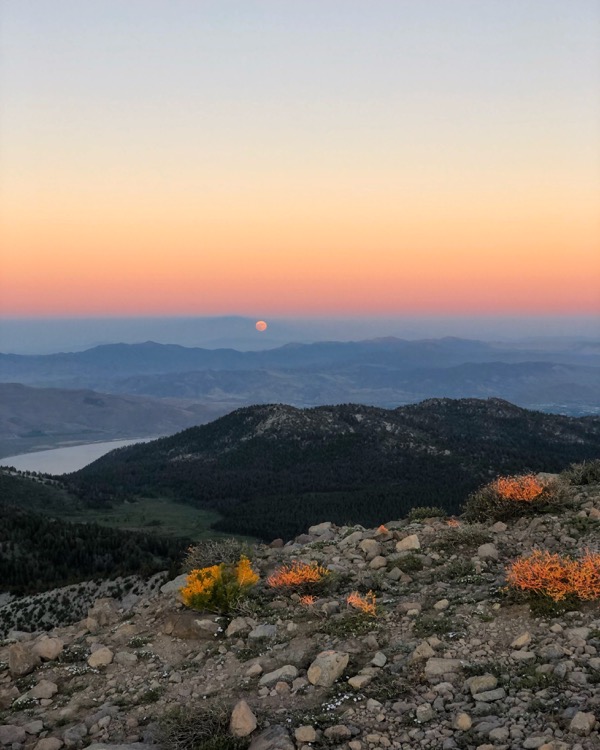 Despite training most of the spring and summer for the relatively flat and fast Badwater course, Burt felt confident in her pivot. Last March, she did 400 miles in one week on the Arizona Trail and had been on the TRT route as recently as last November. Last year, she called for help in the last 10 miles because hallucinations began to compromise her safety, forfeiting her chance for the FKT.

This time around, she said her coach’s main principle at remaining dynamic and fast at any distance left her feeling both physically prepared and confident for any challenge she chose, regardless if it was planned or not. She knew she could persevere even if the attempt went long because of her experience staying up for 2-3 nights in a row, whether race directing her Triple Crown of 200s or during her own previous adventures.

Although it wasn’t planned, the timing for her July TRT FKT attempt ended up coinciding with some of the longest days of the year, which, compared to her attempt last fall, was a huge boost. “Everything becomes alive and moves in a different kind of way at night and in November, I had almost twice the amount of nighttime hours, so that slowed me way down,” she said.

Burt took that year of knowledge and training and tried to pare down her gear in order to run faster. In November, she carried a lot more because she was apprehensive about the distance, as well as the cold and nighttime hours.

She started with just 11,500 calories (compared to 16,000 last November) on July 4, which equated to approximately 150 calories per hour for her 60-hour goal time. Ultimately, she only consumed around 7,000 calories. “It all comes down to the choice during unsupported attempts — a tug of war in how much weight you carry versus how fast you want to be able to run.” Some quick math proves that Burt was extremely efficient, staying light and consuming roughly 100 calories per hour for just over 60 hours.

Early on in the attempt, she played it a little safe and probably should have tried to eat more. “It’s hard to know how much food you have, and how much you actually need,” admitted Burt. She brought 16 dense peanut butter bars that she believes she didn’t need. “Having too much of one thing is not good, but even with tons of practice, nutrition is always a hard thing to nail.” She did know that her pace was well within that fat burning range, so she was working through some of her body’s own calories, too.

Only a few days prior to Burt’s attempt, her friend Helen Pelster was out on the trail and pushed for a new FKT in 3 days, 3 hours, 44 minutes and 13 seconds. “It’s inspiring to see other women getting out and doing it unsupported because for many, many years, no one had submitted a time,” she continued. “To have the example happen right before me was a powerful inspiration in my own journey on the trail.”

Helen finished right before Burt started and that played to her competitive advantage because she knew the time she needed to beat. “In November, I added six miles by mistake and for someone that knows the trail as well as I do, I couldn’t believe it.” But she knows that’s just part of the challenge of FKT attempts.

Balancing race directing duties with travel, while being a single mother of two young girls and maintaining a robust training schedule, is no easy task. “It’s incredibly challenging being a race director and then with 200-mile-long races, it amplifies it even more,” she said. 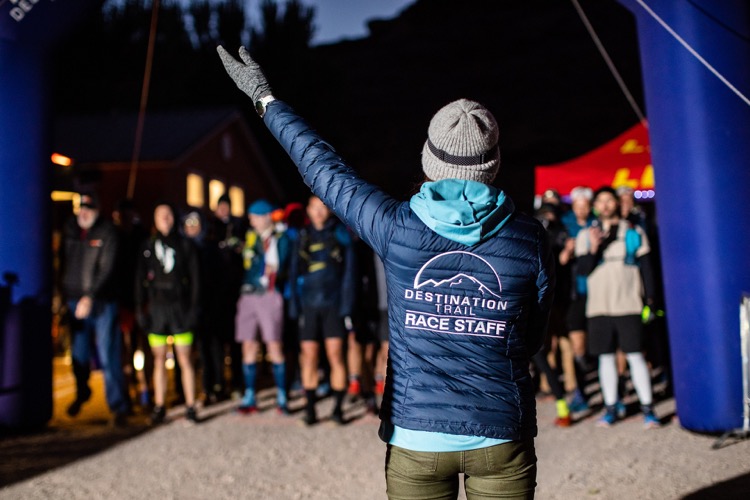 Rather than actual balance in life, Burt feels as if it’s dipping into working way too hard and then getting out and training really hard; intense on both ends of the spectrum. In a typical year, from late June to October, she stays super busy with the Grand Slam of 200s, so she knows it’s better to not race during that time period. Putting in big miles while marking courses sets a good endurance base, but is not great training for running fast.

Since Burt has a tremendous amount of experience in dealing with the unexpected, she finds strength in understanding that most of it is out of her actual control. She is the type of person that can easily go with that flow, and truly enjoys the unforeseen trail project opportunities that present themselves to her.

“Getting out into nature and moving is something that is meaningful in life and gives me joy. Once I’ve come back from an adventure, I can enjoy the little things in life, like a hug from my daughter. It gives us this experience that allows us to reset our reference point in life and have more gratitude, and also take a part of nature and that piece of meditation that we find out there,” she continues. “It feels like something that we can feed ourselves with, much like with food or hydrating ourselves with water. I do think there is a human need for connection with the dirt that I don’t fully understand, but I do know it is really important for me to be a good human and be able to understand my ‘why’.”

With just over 40 miles to go on her TRT FKT, her motivation was simple: she was on pace to set a new record. Her early blisters had started screaming at her. The gaiters she was using weren’t keeping the dusty Tahoe trail dirt out of her shoes and socks and the friction became nearly unbearable. “I started thinking about how Cameron Hanes runs without socks all the time,” she said with a bit of a chuckle. “And I was so desperate to get the pain out of my feet that I decided on a whim to just take off my socks.” Low and behold, the quick and quirky fix sent her along the way moving at a faster clip. She finished her clockwise TRT FKT attempt faster than she started, clocking a new unsupported record that was 15 hours faster than Pelster’s time in 2 days, 12 hours, 47 minutes, and 34 seconds. 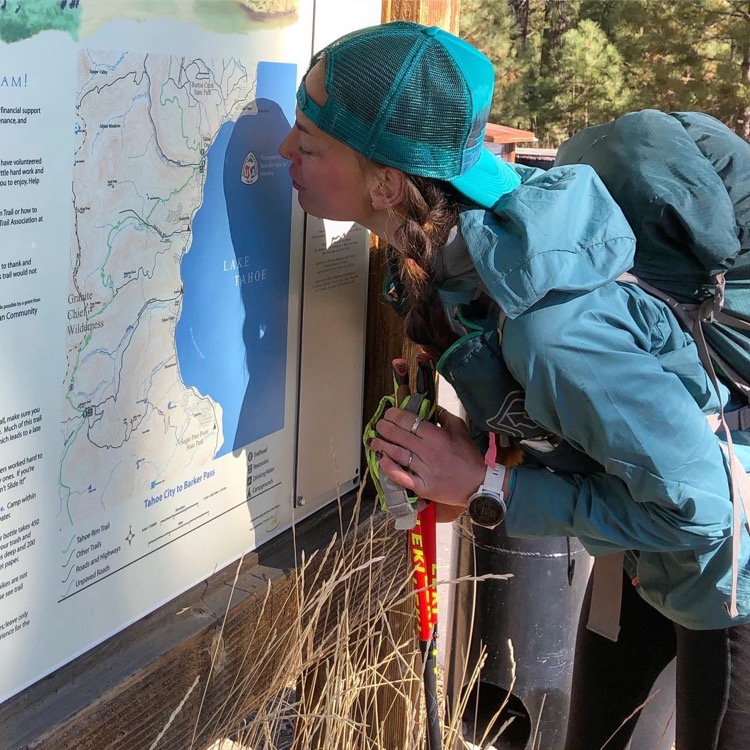 Finishing the TRT for the first time in 2019 in 72 hours. Photo courtesy of Candice Burt.

“I think I mastered my mind to get to the end and used my fears to fuel my way through low points,” she reminisced fondly. “Although I got scared out there, no doubt about it, I truly enjoyed the process.”

Her TRT FKT stands as a temporary culmination point, but she will continue to move forward and has her sights set on breaking 60 hours on the trail later in the year or attempting something new. Regardless, she remains versatile in her pursuits and appreciates each step along the way.

“Part of being human is learning and improving each day, especially in running,” Burt has found. “If you set the bar too high for yourself sometimes you won’t even go for it, but it’s still important to take risks.”

Paramount to over training is how we continue to evolve in our interactions with people not only on the trails, but in everyday life, as our collective current situation becomes emphasized. “Just be kind to people,” Burt said in earnest. “I think we can make a lot of change in the world with such simple acts. When you’re a part of nature for a long period of time that does make you kinder once you return to the world.”

thanks for the article Jeffrey & congrats Candice! You impress massively since I met you at Yakima Skyline Rim in 2013 and not just with FKTs! Best wishes for what is ahead from Switzerland!

Congratulations, Candace! You continue to inspire me each and every day! Thank you Jeffrey for giving Candace the front stage article that she deserves.

Thank you Thomas & Diann! It was my pleasure to share this amazing FKT story about one of the leaders in our community.