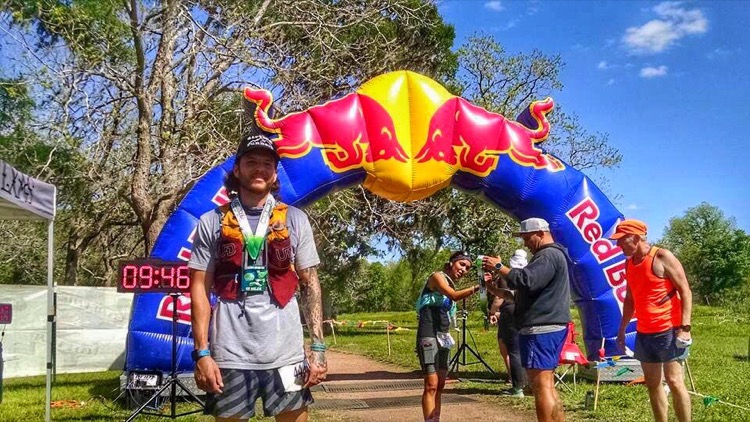 On Friday, April 8 at 5:30 a.m. I found myself on the canning line at Martin House Brewing Company in Fort Worth, Texas. The following week would be our second release of Friday IPA, my favorite India pale ale that our brewery makes. It’s always exciting canning special release beers, especially when you get cool new cans to package the beer in. This day was different though. All I had on my mind was getting those 700 cases done so I could meet up with my good friend Drew Flowers and hit the road for Brazos Bend State Park in Needville, Texas. All that separated me from running my first 50-miler was a five-and-a-half-hour drive, a few short hours of sleep, and a walk to the starting line of Trail Racing Over Texas’ fastest trail race: Brazos Bend 50.

After a few hours of driving, some David Goggins podcasts, food, and music, we made it to our hotel. I set out my gear for the next morning and managed to squeeze in a solid four hours of sleep before the alarm went off at 3:50 a.m. The day I had been training for was finally here. Drew and I packed our things and hit the road. We had only made it a few miles down the road when my truck started acting funny. All of a sudden we were flying down the road at a top speed of 25 miles per hour. Nerves set in. Of course this damn truck would drive perfectly all the way from Fort Worth to Sugarland then give me trouble on the way to my biggest race yet!

We made it through the front gate before stalling out in the parking lot. I put the truck in park, turned the ignition, and it started right up and drove like nothing had happened. I was definitely awake now. I made my way to packet pickup, got my stuff, and then Drew and I lugged our cooler over to the side of the trail. Before I knew it we were counting down and then off to the races!

It was a perfect morning at Brazos Bend State Park. As the sun started to rise, a cool fog lifted off the Brazos River revealing stunning views of our surroundings. We could not have asked for better weather or a more gorgeous park to be racing at. I made a couple of friends over the first few miles and we kept a good pace while talking about where we were from, what races we had done and what was coming up. I was already in a good rhythm and sticking to my race plan. I wanted to start slow, get a feel for the trail, then slowly pick up the pace as the race went on. My main objective was to finish in under ten hours.

After finishing the first loop and “climbing” one ten-foot hill, I could tell that this race lived up to its name: the fastest trail in Texas trail running. This course is flat! What I really enjoyed about the loop that Trail Racing Over Texas (TROT) put together is the out-and-back parts which allow you to see other runners and different sections of the park. The scenery is awesome. You get to run past gators, over bridges, through the woods, on trails through tunnels of tree canopies, and down rocky roads. The park has a variety of ecosystems and wildlife that make it a true nature lover’s paradise! 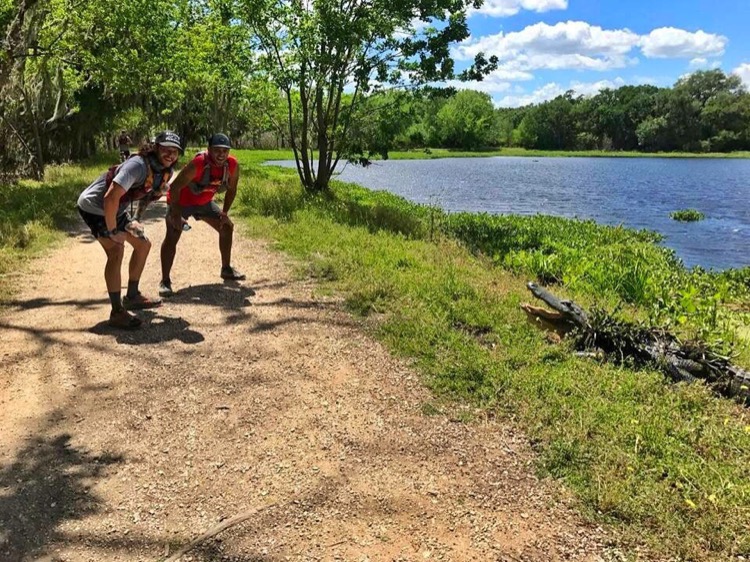 As I started the second loop the sun was getting higher in the sky and I could start to feel the heat beating down. There were some sun-exposed parts of the course but also some shaded sections. I was wearing my headphones and cruising.

Another highlight of this race was the aid stations. Tables were stocked with everything from peanut butter and jelly sandwiches, fig newtons, bananas, oranges, sweets and gels, to Gator-itas and Red Bull! Pair that with experienced volunteers who are there to help you with whatever you need and you have a recipe for success. I ran with my Ultimate Direction pack but next year I will likely run the 50-miler with two handhelds. The course has aid stations every few miles so you don’t need to carry more than a few gels and some fluids.

At the end of my second loop I picked up my brother-from-another-mother, Drew, for the final lap. My spirits were high and my mental game was on point but the flatness of this course had started to take its toll and soreness was beginning to set in. It’s easy to underestimate a flat course. Using the same muscles and repeating the same motions for 50 miles definitely wears you down.

The toughest part of the course in my opinion was the trip out to Sawmill Aid Station. It is a long gravel road that is mostly exposed and seems to go on forever. When you finally make it out to the aid station you realize that you have to turn around and go all the way back. You might think that since you are almost finished, going back would seem to go a little faster, but you would be wrong. Only a few miles separated me from the finish but it seemed to take hours to get back to the main road. It presented more of a mental challenge than a physical one. I think for the next race, especially the 100-miler, I will use some music on this part of the course to occupy my brain. 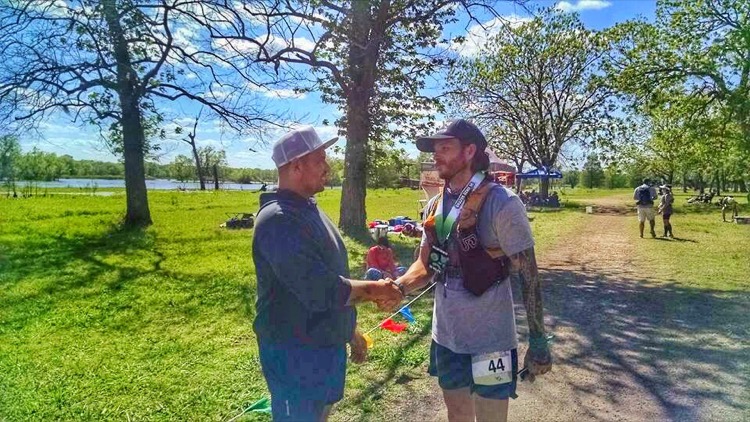 After a great day on the trails I managed to finish in 9:44:58, under my ultimate goal of ten hours. RD Rob Goyen greeted me by my first name at the finish line with my medal and a high five. Drew and I snapped a few photos and then I enjoyed an ice-cold Red Bull while we watched other racers finish. My first 50-miler was in the books and I felt great. As I sat there taking it all in, I realized that Drew and I would be making another trip to Brazos Bend State Park in December. We had already registered for the Brazos Bend 100-Miler.

This was my first TROT race. All that I can say is WOW! These guys definitely know how to put together a fun trail race. It is really refreshing knowing that I don’t have to travel out of the state for a world-class trail running experience. I definitely have to thank Rob, Rachel, and all the Trail Racing Over Texas volunteers and family for all their hard work. You all put on a phenomenal race, one that I will never forget. I really felt like family during my nine-plus hours of suffering. I look forward to volunteering with you guys soon and running more TROT races!

It was an awesome adventure that I’m glad I was able to share with you. Looking forward to BB 100!

I’m glad I was able to join you on this awesome adventure. Looking forward to BB 100!