Thomas Torres’s first 5k race was in the middle of the ocean. To be more specific, it was on the deck of an aircraft carrier while serving in the US Navy. “I did the longest scheduled Navy deployment since the Vietnam era—we went out to sea for 10 months.” His home was a quarter-mile-long ship that housed 5,000 people and as part of their daily schedule, they were given one hour to exercise. He used this time to engage in his newest hobby, running. “I ran on the treadmill every day for 10 months.” While visiting the Persian Gulf, Australia, Singapore and Dubai, he continued to run on the ship. The views were spectacular, and the running kept him in balance.

Thomas was a well-traveled kid. His dad worked for the forest service as a civil engineer, and his family was constantly on the move to Arizona, Colorado, Nevada, Washington and Oregon. His last two years of high school were spent in Eugene, Oregon, a running mecca and home of legends Steve Prefontaine and Alberto Salazar. However, Thomas was far from the running scene. “I dreaded the end of baseball practice because I knew we had to run. I hated it.”

After graduation, Thomas attended Oregon State University and began to put down roots for the first time in his life. He had never stayed in the same place for more than four years, so college brought him a new sense of stability. After two years, he changed his major from biology to psychology because his mother had struggled with addiction for most of his childhood. He had seen her struggles first-hand. After earning his degree, he contemplated grad school to study behavior counseling. However, he soon realized that psychology was not the right fit and was unsure about what to do next. “I was kind of at a loss.” His younger brother was serving in the Army and had spent one year in Afghanistan. “Watching him come back from the war was an extremely emotional and inspirational time for me. I saw the pride he felt.” This was the driving force behind Thomas’s decision to join the military.

Over the next four years, he spent 16 months at sea and discovered his passion for running. “Being deployed was a huge mental stress, and I proved a lot to myself.” When he returned, Thomas joined the San Diego Run Club. “I was raring to go. We had evening runs at 5:30 p.m. and I was out there at 4 p.m.” He eventually signed up for a marathon and then watched the documentary about Anton Krupicka, In The High Country. The seed was planted. “I can legitimately say that Anton was the one who got me into ultrarunning. I just loved the idea of being out there and depending on myself.” 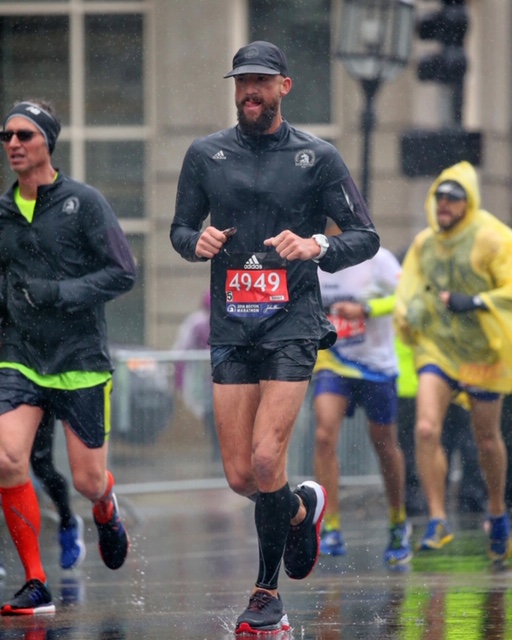 The day he got out of the Navy, he traveled to Joshua Tree and spent the next four days backcountry camping and running. He needed to clear his mind and be by himself. Four days turned into three and a half months, as he embarked on a solo road trip that took him from San Diego to Washington, over to Montana, Wyoming and down through Utah. “I ran in pretty much every national park I could find. It was probably the best time of my life.” He also ran his first 50k, Stumptown, in Portland, Oregon. His trip ended in Flagstaff, Arizona where he completed his postgraduate degree in biology.

In 2017, Thomas completed his first 100-mile race, the Javelina Jundred, and also qualified for the Boston Marathon after running a 3:00:40 at the Phoenix Marathon. In 2018, he traveled to New England for the first time to run Boston. The conditions were brutal that day, with frigid temps, driving rain and 35-mph winds. “By mile 15, I couldn’t feel my fingers and I couldn’t eat my gels because they were frozen.” He remembers taking that famous left turn on Boylston Street towards the finish, “I was so dehydrated and malnourished that I started seeing double.”

Thomas has a busy year ahead, including a move to Mammoth, California. “My goal is to discover new terrain and set my foundation for the next five to seven years.” He feels fortunate that his job as a field biologist will allow him to “not only work in the field, but discover new trails to run.” His upcoming race schedule includes the Mountain Lakes 100 in Oregon, and he’s also hoping to run a sub-three hour marathon and get some redemption in Boston. His dream race is the Leadville 100, and he also hopes to run Western States and the Vermont 100 in the future. When asked about his motivation to compete in a sport that, from the outside, seems to involve so much pain and suffering, he said, “It goes back to challenging myself, because I never felt that I was that strong, mentally. It’s why I think I keep putting myself through these uncomfortable conditions.”

Thomas Torres, thank you for your service. From one service member to another.
awesome story. Have fun with running.