Sharon Knorr and her two kids at the 7 Sisters 2018. Photo courtesy Sharon Knorr.

Sharon Knorr was quiet and reserved as a child growing up in Marietta, Georgia. Early on, after receiving discouraging advice from her doctor who suggested that she not run due to her asthma, she decided she wouldn’t be held back. “I really wanted to be on the soccer team, so I just started by running to the end of my driveway. By the end of the year, I could run enough to start playing soccer, then basketball and then, I just started running for fun.” The determination and perseverance changed her life profoundly, setting the stage for future pursuits.

Over the years, Sharon enjoyed running with her kids in strollers and even completing a marathon in 2010. But it was a summer day in Vermont in 2016, that truly opened her eyes to what she wanted. While she was crewing for a friend at the Vermont 100 (VT100) and watching the day unfold, a thought entered her mind, “This is it. Forget road running, forget road marathons and forget everything else. This is everything right here.” It was such a magical weekend for Sharon and her kids. They slept in their car to warm up after crewing all night in the rain. After they woke up at 6 a.m., Sharon’s six-year-old daughter turned to her and asked, “So, you’re gonna do this next year, right?” Her resounding answer was, “Yes.”

Sharon was on a mission to find her qualifier so she could toe the line of the VT100 in 2017. Some people tried to convince her to start with a 50k and work her way up to 50 miles, but that wasn’t Sharon’s style, “I’m going for the 50-miler, maybe even a 100k.” After some searching, she had found her race: the Lookout Mountain 50 mile in Georgia. She had no idea what she was doing, but she had trained hard, “I was waiting the whole time for the part where I was going to be like, ‘this sucks’ but that never happened. I was excited the whole time.” Upon completing the VT100 the following year, she signed up for her second 100-miler just weeks later. 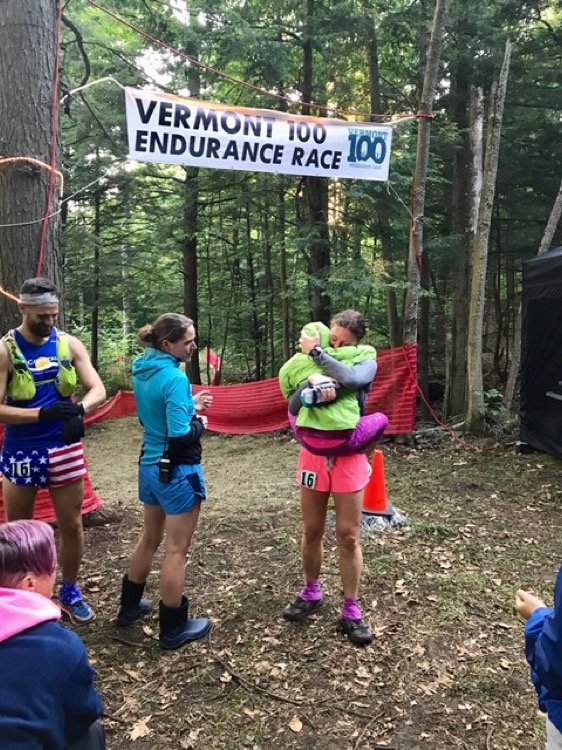 At the Grindstone 100 in Virginia, an out-and-back course with an impressive elevation profile, she had no crew and no pacer. Sharon remembers being at the starting line convincing herself that she’d go as far as she could. At the turnaround point, she said she had a moment, “The sun was coming up and I was looking out over all the mountains bathed in gold light, and I realized I was doing it – all by myself.” Standing there alone in her thoughts, she smiled, “I gave myself permission to dream as big as I ever wanted to. I was so happy.”

Sharon is on her biggest quest yet, training for the Grand Slam of Ultrarunning. She will run four of the five oldest and most prestigious 100-mile races in the United States this year—Old Dominion, Vermont 100, Leadville 100 and Wasatch Front 100. “Because I’m a nerd, I wanted to know more about this beautiful, amazing thing that has come into my life and made it infinitely better.” So, she chose races that were at the core of the sport. “It’s not hard to convince me to do anything.” She will be one of only five women taking on the challenge this year.

When we spoke about how she juggles being a single mom to her two kids, working full time and training for the Grand Slam of Ultrarunning, she expressed, “It’s all about balance.” Her kids come first. She fits her training in when they are at school or at practice, and in and around work. Her kids come to many of her ultras, and she goes to all of their activities. They figure it out as a team, “What are our priorities? What are our goals?” They love to explore together, venturing on backpacking trips every year or skiing in the mountains. “They feel really lucky to have a mom who has introduced them to these adventures.”

When Sharon isn’t running, you can find her exploring with her two kids, rock climbing, skiing, backpacking, reading or playing the various instruments. But her heart truly belongs to running trails, “There’s nothing in the world that has ever made me feel more alive, and more like a small part of a big world that’s just so beautiful and amazing when I’m running for hours and hours. I just love being out there.”