Kevin Draper before the start of the Chesterfield Ultra 2019. Photo: Maria Chevalier

Kevin Draper grew up in the coastal town of Guilford, CT, where his adoptive parents helped him cultivate a love of nature. Yearly trips took them to the mountains and lakes of New Hampshire where they swam in Lake Winnisquam and spent time exploring Gunstock Mountain together. In the summer of 1996, Kevin started exploring the immense ruggedness of the White Mountains in NH. “I fell into a group by chance and we liked to do FKTs around the Mt. Lafayette Loop before it was a thing. I was in my early 20s at the time, and the White Mountains just pulled me in. They were absolutely gorgeous and breathtaking.” 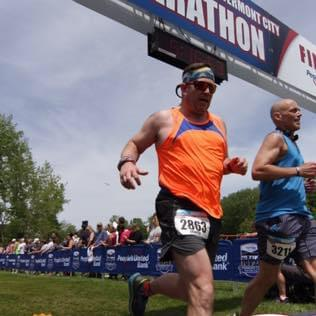 Fifteen years later, Kevin weighed close to 260 pounds; the constant eating out and drinks after work had taken a toll on him. “I was living in Natick, MA, and commuting into Boston every day on the train. I remember looking in the mirror one day thinking I could never get back into shape. I was disgustingly overweight, tired and I thought that was the end.” It just so happened a Planet Fitness gym opened up about a half-mile from his house and after a few weeks, he decided to run to the gym instead of drive. “My wife Claire and I had a one-year-old, and I knew I had to change my habits and lifestyle to become a hands-on father.”

Kevin soon became a regular at the gym. It was there that he learned about the Spartan Race. “One of the biggest events that the Spartan Race hosted in 2012 was the Beast at Killington, VT. It was a 15-mile obstacle race in September. This race was extremely difficult, but I absolutely loved it.” After four years of competing in the event, he realized what he really wanted was more running. During a visit to a friend’s house in Vermont, he learned about the sport of ultrarunning and a specific race, the Vermont 50, that brought participants along the backroads and single-track trails during peak foliage in Vermont. In 2016, Kevin completed his last Spartan Beast and the next weekend, finished his first ultra event, the Vermont 50K. “I fell in love with ultrarunning and the culture and volunteers that came with it. I never in my wildest dreams thought I’d be able to accomplish anything like that. It was extra special spending the weekend with friends at their home so my family could join me.”

His next challenge brought him to the Vermont 100K in 2017. He met a runner named Jennifer along the trail, “We ran side by side for 30 miles and chatted, then the wheels came off the bus for me.” They parted ways at an aid station, and that’s where Kevin’s race began. “I hadn’t been doing a great job pacing myself and really had to dig deep for those next 32 miles. There was just an energy I got from the volunteers at aid stations and other runners, it was truly amazing.” He ran the last fifteen miles with a runner, who was running the 100-mile. “We hugged at the finish. That’s the special thing you have during longer races, you never know who you’ll meet or the impact you may have on someone else’s day.” 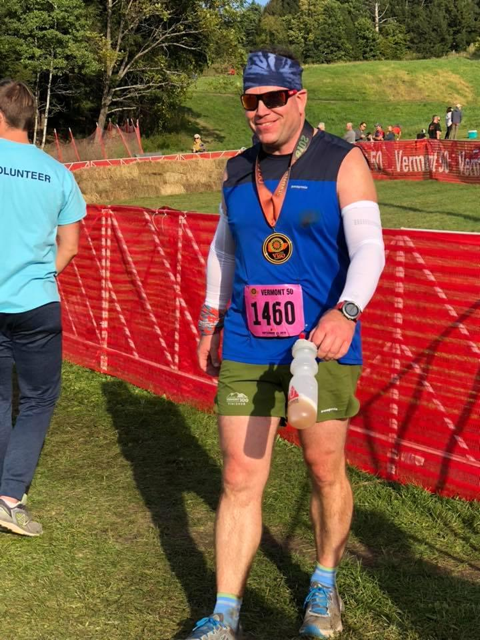 Kevin all smiles at the finish of the Vermont 50 in 2018. Photo: Susan White

When asked what running means to him, Kevin smiles. “Running for me now is very therapeutic and my wife can tell if I really need to go for a run because I get edgy. It’s become a lifestyle. It’s really taught me that life, quite simply, is an ultramarathon. You have to pace yourself and keep cool when things go terribly wrong or right. You can always get through a situation by thinking clearly and problem-solving.” He also has words of wisdom to new runners: “Don’t compare yourself to others—run your own race. Everyone is different. Enjoy running and take it as fast or slow as you need to. You’re not going to get instant gratification. You have to work at it.”

Kevin enjoys spending time with his wife and two daughters at their home in Massachusetts. “I love to ski and constantly be outside. I’m lucky to have a skiing family. I’m a great skier but my wife is better.” He enjoys hitting the local trails with his family and dogs. He adds, “Everyone is happiest then.” The Vermont 100 race is next on his radar, with a goal of finishing it twice, for a great reason. “So I can have two buckles to pass on to both of my daughters.”

I live in NH and close to Winni, I know what he is talking about…really appreciate the article and the inspiration.