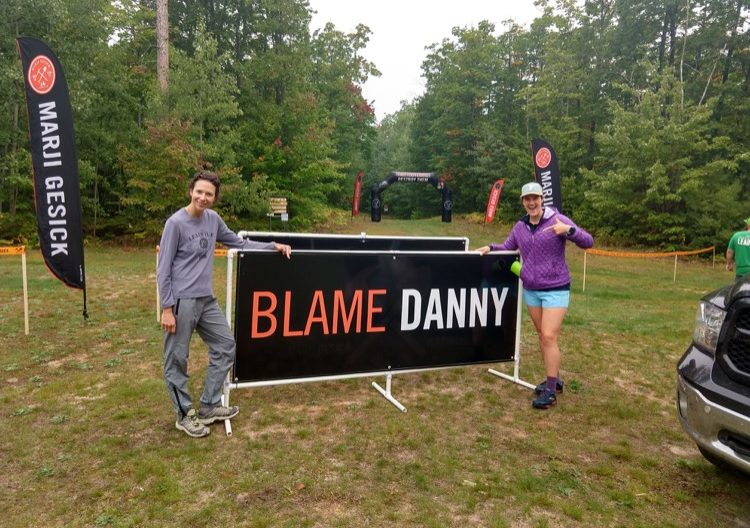 Andrea (left) poses next to a sign blaming the race director for the tough course.

After hearing about the Marji Gesick, I begged my husband to support me during my first 100-miler in eight years. A lot has changed since I got to the podium at Leadville 100 in 2011 – my name, three kids and even a new career.

The Marji Gesick is better known as a mountain bike race, but soon will be well known in the ultrarunning world as it offers both 100-mile and 50-mile runs. It also features “the worst of both worlds” with a 100-mile duathlon, and came as no surprise that the 100-mile run started with LeBike – a ½-mile bike ride. I survived on a borrowed bike from my pacer – needless to say, I’m glad a fellow racer advised me to pick a good line for the loose sand on a blind downhill.

With no official aid stations, this race takes a self-supported ethos. However, there are plenty of access points for crews to assist along the course (my crew had 13 places where they gave me support). Plus, nearly all the other crews were offering assistance (which was a life-saver when I ran out of water). Pacers are allowed, although most runners decide to tackle it solo. 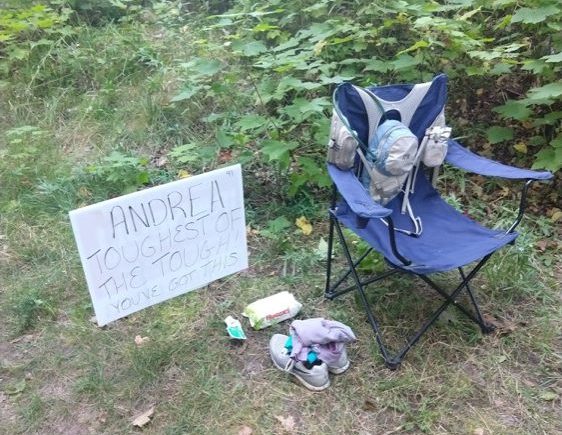 Andrea’s crew kept her motivated at 13 spots along the course.

The course goes through the heart of the largest city in Michigan’s upper peninsula, Marquette, as well as the mining towns of Ishpeming and Negaunee, passing several mine remnants including a sidewalk in the middle of the forest. Almost the entire race is on trail, mostly single track, and the scenery is outstanding with countless vistas, rock outcroppings and lakes. The apple trees along the back half of the course provided a much-needed pick-me-up many times, especially since I struggled to eat anything dry without consuming large amounts of water.

This was the fourth year of the run, with a grand total of 13 belt buckles being awarded for sub-30-hour runners. This year, only a quarter of the field finished. Don’t blame the weather or trail conditions – it couldn’t have been better with overcast skies most of the race and a high just over 70 degrees, yet mild with an overnight low of 60 degrees. So what was the reason for the low finisher rate? As the signs on the course say: Blame Danny. Blame Todd. Danny and Todd designed a course to test one’s limits. And it’s only fitting that the actual course was 106 miles.

How can a race in the Midwest compare to the legendary mountain races? It felt like Todd and Danny found every climb in the county for us to tackle as there was over 14,000 feet of elevation gain, mostly back-loaded in the second half of the race. As Danny put it, “It’s fun. In a sadistic sort of way.” The biggest climbs up Marquette Mountain and the ski hill, weren’t even notable compared to constant climbs in the last 45 miles of the race. It made the last 15 miles of the Leadville 100 seem like a cake walk. The worst part was dreading the downhills more than the uphills. Sore quads aside, the technicality of the downhills required nimble footwork to avoid taking a digger – quite a task in the middle of the night. My favorite (actually, not at all) was when I had to come to a dead stop on the trail due to a maintenance project about 5 miles from the finish line. I stood there trying to figure out how to handle the four foot drop off – but at least I didn’t have to carry a bike!