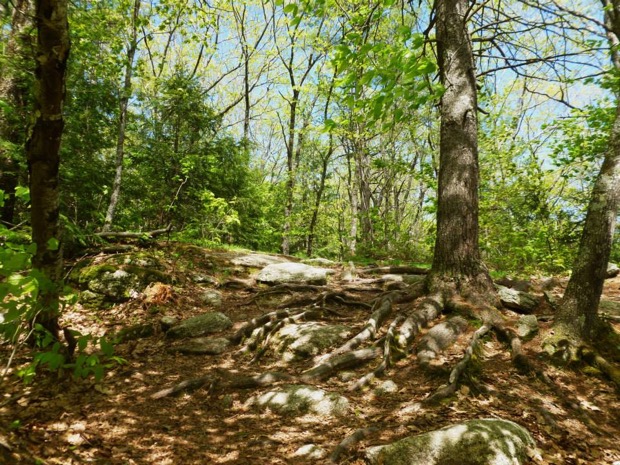 I guess running the race you also direct is like having someone else make you a sandwich.  Or like being a guest at your own dinner party.  The food tastes better, the people seem more interesting, the presentation more inspiring.  Four years ago, two other running friends and myself decided to create a proper ultra from the miles of gorgeous singletrack at the Bradbury Mountain State Park in Pownal, Maine that our club Trail Monster Running calls home.

This is a trail race by trail runners for trail runners.  So much so, that when my friend Tim signed up for the 50 mile and asked me to pace him, I couldn’t resist.  Could I get away from my race directing duties for the time it took to pace?  My two other race directors assured me they would hold down the fort while I ran.  In fact, one of them ran the 50 km the year before.

From “the ground” as race director, there is a one-dimensional “watch runners come in and out of an aid station” with a few quick moments to share in their experience and make sure they have everything they need.  Actually running the course as race director during the event would give me a racer’s-eye view of the day.  Little did I know, I would become part of a pretty exciting “race-within-a-race” and experience my beloved trails in a whole new way.  The Big Brad Ultras are entirely runnable (at least the first lap is…), but its arduousness sneaks up on you.  What seems manageable the first lap turns into an energy-sucking, leg grinder on the following laps.  The twisty turny rooty singletrack that seemed flat the first go ‘round gets tighter and toe-snaggier in the miles to come.  Lunchbreak Hill, which starts off the race and didn’t seem “that bad” in the early morning grows longer and longer.  But what’s great about The Big Brad Ultras are that they attract the very folk who want to put their training and perseverance to the test.

Entering the most technical singletrack portion of the course, Tim held a steady, quick pace and we piloted our way through the trails I’ve run hundreds of times, though it looked so different dressed up for race day.  Through the woods and over one of the spectacular wooden bridges spanning swift brooks we rolled into “Snowman’s” aid station, famously known for pancake-wrapped bacon and the saying “you can drop from the race, but you can’t drop here”.  Many a runner have been revived and booted back onto the course from this locale, only to return for another year and thank us for “encouraging” them to finish the race.  At Snowman’s, Tim paused for a drink and food.  As we chatted with the volunteers, our teammate Jamie and his pacer Zak blew out of the woods full speed.  A cheer went up at the sight as concerned word spread earlier that Jamie was struggling and debating dropping.  He and Zak took off down the short and solitary dirt road portion of the race with Tim and myself in pursuit.

I found myself part of a chase involving the “fast boys” that I never would have experienced otherwise.  Jamie became a goal out of sheer, healthy race competition and an attempt to push one’s limits.  Tim held steady, I held on, and we maintained a pretty consistent distance less than a quarter mile behind.  I was running this course faster than I ever had before, racing hard and becoming part of the very race I helped bring into being.

Jeremy Ritcey set a new course record in the 50 mile of 7:44:20 beating the old record by almost 12 minutes. With daughter Summer and race directors Valerie Abradi and Ian Parlin

We hurdled rocks and branches with exhilarated glee as super technical portions of the course I knew so well flew under my feet.  This was trail racing defined.  Up ahead Jamie and Zak came into focus, power walking one of the steeper sections.  We slipped by them with a few quick greetings and felt the balance shift from one man to another.  Now, with Jamie and Zak on our tail, there was no time to spare.  Tim pressed on and familiar sections of trail came and went as I shouted encouragement and reminders of what lie ahead in the terrain.  But the gap slowly closed between two talented runners and soon our teammates were mere steps behind.  As they moved out in front of us, I whispered to Tim, “go get it!”, but his answer was simple: “No, I just wanted to catch him once, I’ve had a great race” and together we flew over the rocks and roots and down Lunchbreak Hill toward the finish.

I peeled off at the Tiki Torches which lit the mountain trail that morning before sunrise as Tim was received into the finish for 7th place to screams and whoops less than three seconds after Jamie.  What a race, what a run.  My day wasn’t nearly over though.  After some quick congratulations and a change of clothes, I unceremoniously transformed back into an RD, still relishing the excitement of the last 15 miles.  From guest to host, I hopped in my car to deliver more fig newtons to an aid station.  If you’re looking a “beautiful challenge” as it states on our website, consider joining us for the Big Brad Ultras in 2015.

This is a great race. It’s well run and the support at the aid stations is amazing. I ran the 50K in 2013, and I’ll definitely run it again in the future (maybe even the 50 miler).

Thanks Daryle, hope to see you there in October and hopefully for the 50 miler!