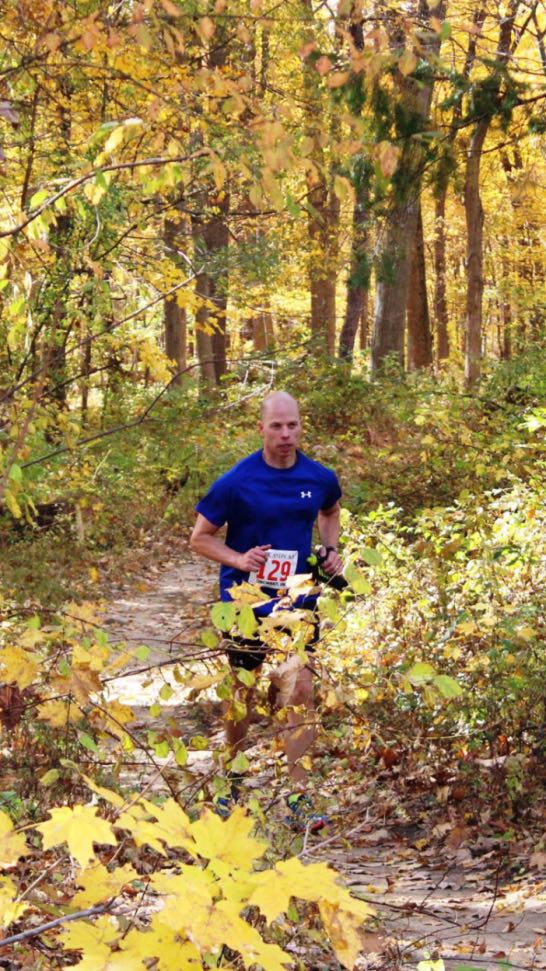 The author in the last mile of the Stone Steps 50K in Cincinnati, Ohio.

Being Present in the Woods

Excerpted from The Door Is Not Locked: Finding Happiness in the Real World

Some say that those who run ultramarathons are running from something: depression, demons, daily stress. Some counter that they are actually running toward something: the finish line, a personal record, a sense of accomplishment. At times, it may seem to be a bit of both. At times it may be wholly unclear why we do this to ourselves. But the true joy of ultrarunning can be found at any point on any trail – even the trail we call life.

When I was 9 years old, I was thrown into a gymnastics class because I was too wild at home. It worked. I competed through high school, even traveling to the Olympic Training Center on the road toward the 1992 Olympics before a broken neck got in the way. That level of commitment took work, and that work took a toll, especially socially, since I spent nearly every evening at the gym. Needless to say, adolescence, for me, was especially awkward. But none of that mattered 9 feet off the ground, upside down, flying around a stainless steel bar holding on with only one hand. Completely locked into the task at hand, I was truly captivated. At such a moment, there were no crushes, rejections, homework, bad days, good days. There was nothing but that moment. The rest of the world melted away. Gymnastics forced me to be present.

The author in the last mile of the Stone Steps 50K in Cincinnati, Ohio.

Have you ever been captivated by a task? Have you ever been so into a moment that you forgot all your worries? Even if it’s for a fleeting second, it is a wonderful holiday from the distractions, fears and regrets we tend to carry with us. What if we could live in that holiday all the time?

Ultrarunning taught me that we can.

With only 5 miles to go in my first ultra, I realized that there was no way that I was going to finish under my goal time. So I tried an experiment. I dropped my focus on the clock 5 miles away. And I did so by choosing simply to be present. In the forest, on the trail, surrounded by beautiful fall foliage, aware of the gift of my sore legs still running after all those miles, aware of the blister on my heel that signified the effort I had put in.

A veil lifted. I could see the world, the experience more clearly. My legs became lighter, the ground softer. I passed a couple of runners on the trail who looked like they needed help. I stopped to offer them nutrition and water that I had with me. I subconsciously gave myself permission to notice the pain in their strides and to slow down to help them despite what it would do to my finishing time. It was a part of being present rather than worrying about how far in the future I would cross the finish line.

And at some point in the last mile, rather than reaching the anticipated cathartic awareness that I was about to finish an ultramarathon, I came to the cathartic awareness that all my concerns, my fears, my pain – physical and emotional – had melted away. I felt the same freedom that I had felt while captivated by the high bar in gymnastics. Only it was in my power now: I could control it. I realized I could give myself the gift of being present. Anywhere, anytime. I had reached true happiness, not happiness that depended upon finishing an ultramarathon under my goal finishing time, but just pure happiness. I had reached enlightenment in that moment in the woods.

Three minutes later, I crossed the finish line. One minute under my goal finishing time. Giving up on running fast – instead, just enjoying the running – had actually made me run faster, even though I stopped twice to help others. As if with a wink and a nod, fate was telling me I had indeed reached my goal.

So whatever your goal, know that you are already there. You just have to let yourself be present there, wherever your own trail takes you.

The book, The Door Is Not Locked: Finding Happiness in the Real World by Roger Cornwall, is available on Amazon.