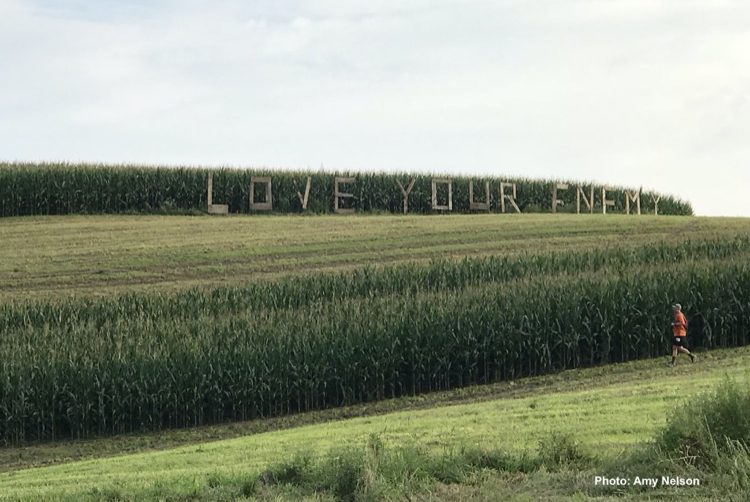 Located an hour outside of Pittsburgh, the Baker Trail UltraChallenge is a 50-mile foot race spanning single-track trails, dirt roads, pavement, footbridges, farms and forests. While the Baker Trail extends a total of 133 miles, for the purposes of this annual race, it’s broken into three 50-mile lengths. These segments – north, central and south – are rotated annually. On Saturday, August 24, 2019, we raced the southern 50-mile course. For the past two years, the runners have passed a stretch of farm land toward the end of the run which showcases a memorable art installation that reads “Love Your Enemy.” Not only is it an extraordinary photo-op, but a thought to ponder as well.

Most runners arrived at a private farmhouse on the Friday evening before the race, in time to set up tents and enjoy a spaghetti dinner and a gorgeous sunset. The generosity and hospitality of the homeowners, Rebecca Slak and Hisham Youseff, was exceptional. They opened their doors for the pre-race dinner and again in the morning for coffee and bagels. When I bemoaned the fact that my husband and I had forgotten our tent, Hisham was quick to loan me one of his. During various parts of the night, we could hear the clomping of horses pulling Amish buggies on a nearby road, as well as coyotes in the distance. 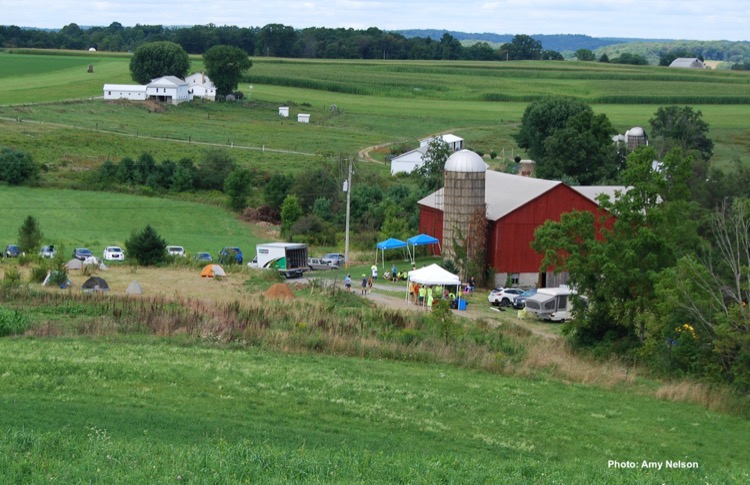 Race day weather was close to perfect – daytime temperatures started in the 50s and climbed into the low 70s. Of the 79 runners that toed the line, 71 finished inside the 14-hour time limit. Brenner Burkholder of Pittsburgh grabbed the first-place finish with an impressive, record-setting time of 8:04:25. Bill Huber and Mark Frey, both top-notch runners and Baker Ultra veterans, came in shortly after Burkholder, taking second and third respectively for the men’s competition. Lauren Jefferson of Rockingham, Virginia, was a top-ten overall finisher and the first-place female, clocking in at 9:39:39.

I chased the almighty Richard Cook for the last couple of miles, securing the second female slot and 20th place overall. Rachel Albert finished as the third-place female. As for the relay component, Beer Trail Edition took first place honors over nine other teams.

The race started on a dirt road with scenic views of farms and rolling hills. I’d heard about the “cliff” at mile five, which warranted a rope-pull to negotiate. As we approached mile five and climbed a steep slope, I couldn’t see any such apparatus. Upon reaching the actual cliff, there was indeed a rope swinging, thoughtfully installed by Dewaine Beard. The nine aid stations that spanned the course were staffed with dedicated volunteers and satisfying food options, including Hostess Twinkies. 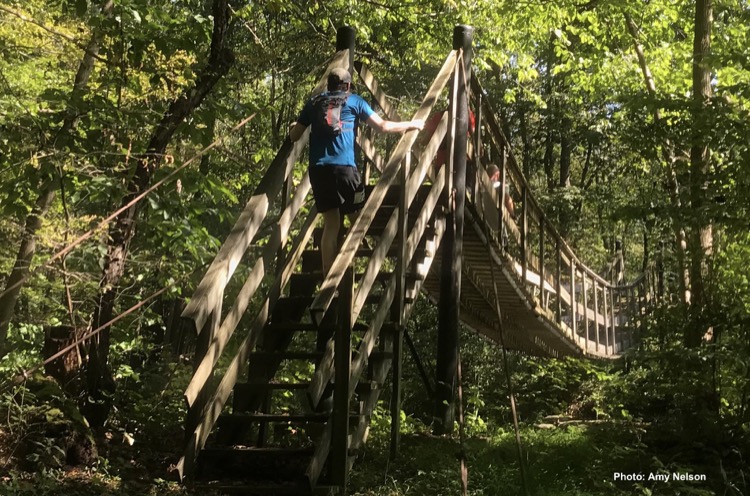 Despite a relatively well-marked course, I managed to miss a turn. Equally unfortunate was that my running partner, Michael, was with me on this little detour. I had ever-increasing visions of consuming large quantities of sheet cake at the post-race picnic.

Like many others, I participated this year as part of a larger goal. I aim for the coveted “Rolling Pin,” awarded to those who race all three sections and finish each within the 14-hour cutoff. August 2020, on the northern section, is the next scheduled race. Arguably the most scenic of the three sections, the northern course winds through beautiful Cook Forest and boasts a challenging cable-wire bridge near the halfway point. We hope to see you there.

This was my first 50-miler and I can’t wait to come back next year to conquer my next section of the trail. The race was terrific and I was fortunate enough to run for a bit with Amy and Michael in the early parts of the race. If you’re looking for a race for your 2020 calendar, I can’t recommend Baker enough!