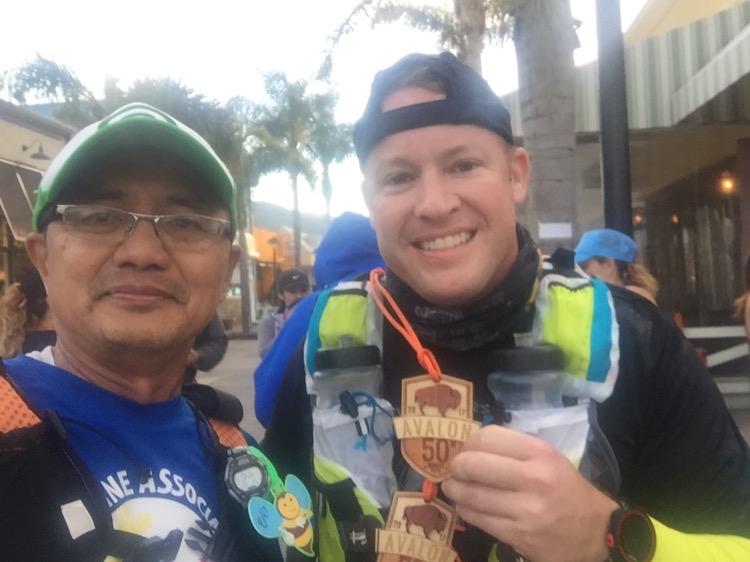 What determines an epic race? This year’s Avalon 50 Benefit Run possessed elements to be remembered, e.g., mud, sweat and tears. The newly added 50k option had its share of stories too.

The days prior to the race were marked by an unusual California storm. For the drought affected state, the rain was very welcoming. For runners, the rain received a thumbs down. That meant trails would be muddy in addition to an already laborious hilly course. Luckily, the ultramarathon gods were gracious enough to grant a reprieve of beautiful weather.

Having completed the race ten times, it still was not a guaranteed finish. One thing remained with my strategy – a conservative pace early. Once the body settled, there was plenty of ground to reel in the fast starters. The trails were still muddy with some puddles during the morning hours but the footing wasn’t too slippery.

There were many newbies in the race. Avalon 50 was also my first 50 miler in 2004. As with many ultras, a nice thing about this race is that veteran and seasoned runners are kind enough to share their strategies and war stories. The camaraderie is great. An ultramarathon is a total different experience from running a marathon. It’s not just about running for time. Watching the sunrise at the race is always worthy of a picture. Lots of runners bring a camera. Aside from the scenic views, the color of sunshine and a possible fox, bald eagle or buffalo sighting are worthy of attention.

Distance is always a factor in a race. The early social friendly atmosphere turned serious business past Little Harbor Aid Station at mile 18. Runners strung out and pushed through the long uphill climb. The interior of the island featured miles of untouched green landscapes, a horse ranch, bald eagle nests, harbors and camp sites. It’s totally clean air and a smog free environment.

At about mile 28, the runners turned around to head back toward the finish. More rolling hills awaited the challenge. There were looks of exhaustion and heavy breathing. Black crows surveyed the course as if preying for fallen runners. No cry of “nevermore” as I dug deep for a second and third wind. Run, walk, and run in repeated motion.

Volunteers at the aid stations supplied the runners with foods and hydration. Eagle’s Nest Aid Station at mile 38 even treated runners with buffalo burger patties and beer. Where else can you get that? Volunteers are indeed angels from high above.

Once I reached Mile 44, Pump House Aid Station, my energy was fully boosted again. One short major climb remained and off to the fast 3.5-mile downhill ride. Some runners couldn’t handle the downhill well due to cramped legs or simply running out of gas. I had plenty in my tank to go through this section and leapfrogged several notches.

In the end, there were tears of joy, in particular for the newbies and those who struggled but pushed their limits to achieve their goal. They dreamed of this race for a long time, took the opportunity and didn’t let it slip away. The medal says it all: Dream on!