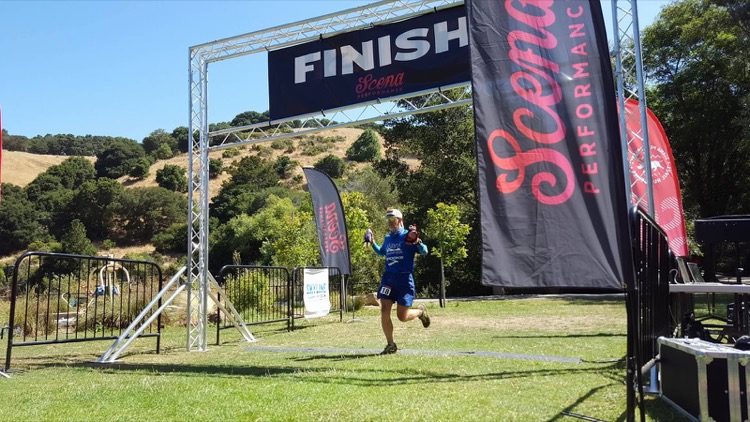 At the Crossroads: The Fine Line between Prolific and Sustainable Ultrarunning

When the physical blow finally fell, and a new sort of running reality had set in, both Chris Jones and Jean Pommier did not know what was happening, or what was next. So much of their existence was ruled by yearly racing calendars overflowing with races. They raced the way others breathe – with a frequency that was needed, and filled them with life.

It was not uncommon in a single year for Pommier, 52, of Cupertino, California, to run the vast majority of the races that comprise the 16-race Pacific Association of USA Track and Field (PAUSATF) Grand Prix Ultra Series – ultras up and down northern California and into the mountains of Nevada.

In fact, 2016 marked an anniversary for Pommier, a distinguished engineer with IBM with a meticulous nature that readily logs dates, times, finish places, milestones and miles. 2016 is the 10th consecutive year that Pommier has participated in the Grand Prix.

Pommier is not only prolific. With a quick, neutral stride that has a snappy type of low-center jackrabbit gravity to it, Pommier is fast. He also seems eternally youthful. The native of France often wears his racing hat backwards, showing a ruddy face and neatly clipped head of hair that is of scotch-red coloring, which in turn makes him look like he’s just been plucked from the pages of Tom Sawyer and randomly plopped onto a dusty NorCal trail. First as an over-40-year-old runner and now as an over-50, it’s not uncommon for Pommier to win an ultra outright, or to set a new age-group record.

“The running can be so good that it’s hard to slow down,” Pommier said. “It can be very difficult to tell yourself to slow down when you get caught up in the competition.”

Chris Jones, 44, of Sonoma, California, is not quite as fast as Pommier, though he regularly finishes in the upper half of his races. What has distinguished Jones has been the frequency of his races. A typical year will see him run up to 30 ultras. The number doesn’t include several shorter races, from the marathon to 5K, which Jones often happily runs the day after an ultra. Jones, a Major in the Army Reserve who has served in Iraq, runs more like a jacket that has caught some wind and has turned into a small parachute; his long, powerful torso tapers to sturdy, muscular legs that look like they could belong in an old-growth forest. Once he starts moving, it is hard to make him stop. Jones is an amiable person, playfully self-deprecating. He smiles often.

“Running has become very social for me,” Jones said. “A lot of times, I’m very happy to find a good running partner and hang with them for the second half of the race. I really enjoy that aspect of ultrarunning. It’s like no other sport from that standpoint.”

Both runners, following different competitive paths, are now at a crossroads. They’ve sifted through medical data and the advice of medical professionals and family and friends, trying to figure out what happened, and what is next.

In March at the Caumsett 50K in Huntington, New York, as he made a gallant run that ended with a new American 50-54 50K age group record of 3:18 (pending another record time run earlier in the year by Rich Hanna of Sacramento, who ran 3:17:48), Pommier suffered a stroke. He zipped through the marathon mark in 2:45 as the day had warmed from near-freezing temperatures at the start. Late in the race, Pommier began to see what he thought were floating, flashing bits of light “that seemed like stars.” Two runners near Pommier began to look gauzy, out of focus. The ground tilted. Pommier’s balance became questionable. Alarmed, Pommier stopped for a few seconds: “I turned my head and I remember that I couldn’t see a thing.” He resumed running. Even with such turbulence swirling inside of him, he managed a 6:39 final mile. Then he needed help into a nearby chair. After several hours at the finish, Pommier experienced numbness in his left hand, arm, leg and in his neck. Three days in a New York hospital, along with a battery of tests, followed.

“I feel very lucky,” Pommier said. “It could have been much worse. And of course, once I got home, one of the first questions I asked my doctors was, ‘Can I still race? At least not pushing as I had been doing?’”

In July, Jones, in the middle of the Santa Barbara 100-miler, began to spit up blood. In what he termed the “hardest” 100 he had ever run, Jones struggled to the finish in 35:43.

Tests a few days later revealed Jones had developed worm-shaped lacerations in his stomach, causing internal bleeding, due to what doctors termed a “helicobacter pylori bacterial infection.” Jones was taking non-steroidal anti-inflammatories for foot pain – cuboid syndrome and plantar fasciitis – which exacerbated the already existing bleeding from the stomach inflection.

“I used to never run with painkillers,” said Jones, who estimated he had taken close to 1,400 milligrams over the first 50 to 60 miles of Santa Barbara. “My doctor says the cuts in my stomach will close up over time. I need to be careful as I ease my way back into my running.”

“It’s a needed outlet for me,” Jones said of racing. “I don’t know how to quite characterize it, whether I’m running away from something…or running to something. But I love running.”

Jones’ experience in 2008, when he was deployed to Iraq, is a reminder of the unintended consequences that can come during an active reservist’s life. A letter from Federal Express informed Jones that he had 32 days to report to Ft. Benning, Georgia. It gave him little time to figure out how to keep his online business – against the backdrop of a recession – viable while he was gone. Jones served 13 months in Iraq.

“It was good,” Jones said of his deployment. “I did what I was trained to do. But I didn’t have a backup plan to keep my business afloat. It was failing when I got home. It caused a lot of stress. I came back from Iraq with maybe a little PTSD, a little anger about my situation.”

So Jones turned to running. He begged his way into 2010’s 28.4-mile Quad Dipsea in Marin County. By his own admission, “That was my exposure, and I was hooked on running.” His weekend calendar began to fill.

“I was running for the competition, sure, but more so to see my friends and to meet new people,” he said. “I like to hang out till the end of the race and cheer people on, get to know them after. More than 50 percent of why I run is the social aspect. “My life would be completely different without it.”

For Pommier, who ran his first ultra a decade ago, the sport combines a profoundly challenging physical endeavor that demands constant mental monitoring – a tangle of ribonucleic acids and special preparation beforehand that rule performance only in accordance to the brain’s willingness to allow a person to approach their outer physical limits.

“You just do it because it’s challenging,” said Pommier, who said he has logged more than 43,000 miles of training, much of it at a high intensity. Just as he spends long hours in his “first” job, often becoming so completely absorbed he loses track of time, running has become what Pommier refers to, with a gentle chuckle, as “…my second job. My excuse for spending so much time running is that it actually helps me find a balance to my life. It balances out my ‘first’ job.”

Pommier has had long conversations with his wife, Agnes, about what the stroke means for running. On the one hand, though he obviously exerts himself to the highest of intensities during races, he’s blessed with a VO2 max of close to 80 and the aforementioned neutral stride, which means he can put more than 1,000 miles on his Brooks before they begin to break down.

Any danger at this point, he says, comes more from within – the doubt that has been created. The wondering: “What caused it?” and “Will it come back if I race for records?”

“If I want to keep going,” he says, “there is a fine line. I don’t want to break the sound barrier again. You don’t want to run beyond your limit. I certainly went on the wrong side of my limit. What I’ve been doing is definitely not sustainable.”

Jones, too, wants to keep racing often, though recent events beyond his experience at Santa Barbara may help him modulate his frequent racing. In late July he and his former girlfriend, Chelsea Laursen, had a baby daughter, Skye. Jones and Chelsea remain friends, and plan on co-parenting.

Jones said when he does return to ultras (more than likely September’s Pine to Palm 100), he will keep in mind what he does best: Run races, but don’t always strain to the finish.

“Very rarely do I put forth a 100 percent effort,” he said. “I have a couple of races, like the Pine to Palm 100 and the Boston Marathon, that I do try my best. But the other races, I always try to run within my limits. You want to stay within reason. When you finish, you don’t want to completely destroy your body.”

Finding and managing that fine line between “just enough” and “too much” is one that all ultrarunners must navigate at some point in their running careers.

While I would usually be thrilled to read about Chris and Jean, I don’t like to read about them suffering! Really glad their stories are out there, however, as a cautionary tale to other folks who would over do it! I’ve been seeing a lot of this with newer ultra runners recently and this “voice of reason” article will hopefully get a few folks thinking in the right direction! Thanks, John!

I’ve been running 12-16 ultras a year for a long time (including a 200 each year for 5 years now) and while folks have been telling me I race too much, I had to experience it for myself and did well until last season! This year, I’ve raced a much more sustainable (for me) 3 ultras with only 4-5 more on the calendar for the year! Hard to find that balance, especially with something that adds so much value and meaning to life!!