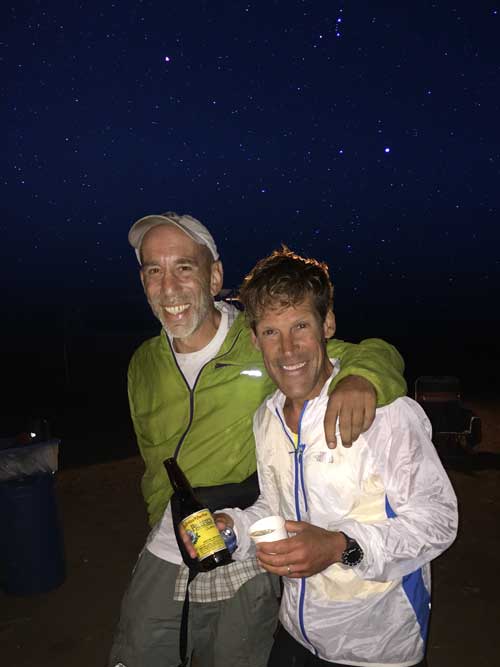 Another Saturday Night at the Back of the Pack

Okay, so maybe it wasn’t the greatest night of his life, either.

Delirious and disoriented, he couldn’t keep food down and was going the wrong way—away from the next aid station, away from the finish line.

We were in Santa Barbara, with about 12 miles left in a grueling 100 miler.

It’s been The Summer of Changed Plans for me, and coming up on possibly the most celebrated runner in America like that, I recalled that saying about what happens when one door closes…

He’s carried the Olympic torch, taken kids on a jog through the White House and has 11 silver buckles from Western States. He’s run across the country and finished longer courses like Badwater and the Spartathon faster than this…

“You’re in luck, Dean,” I said, and like that, two old boys made fast friends.

After some convincing— involving things like chalk arrows and reflective ribbons (the course is well marked, you just have to stay coherent enough to follow it), we were finally heading in the right direction again and it seemed time to ask: “Dean, what are you doing here?”

It turned out his daughter, Alex, attends UC Santa Barbara, and this was supposed to be a father-daughter weekend with a little running on the side. His parents, on a whim, took the family RV up from OC and joined the fun.

But things had gone horribly awry, he’d been lost for hours, his stomach had betrayed him and he felt terrible about the inconvenience.

Berating himself, not bragging, he muttered, “Who needs over 30 hours to run 100 miles?” After a pregnant pause, it was immediately amended to, “Since when do I need more than 30 hours…”

Coming upon the aid station, I called ahead from the dark, “Is Alex Karnazes up there?”

A volunteer yelled back my name. “Vanderpot, is that you? Do you have Dean? He’s gone missing.”

Dean was confused. “Wait,” he said, “they know your voice?”

Then, from the darkness we heard: “I’m here.” It was Alex, and I could discern the concern for her father in her voice.

As we shuffled on in, I said: “If you’ve been meaning to ask your dad for anything, tonight’s the night, he’ll say yes,” Everyone laughed as we entered the aid station.

Although Dean had abstained for almost 20 years, he decided tonight was the night to start drinking beer again. He said it was the only thing that wouldn’t upset his stomach; however, soon there would be ample trailside evidence to suggest otherwise.

He introduced me to his family while they patched him up as best they could. My recollection of incidents from his books—what happens to Styrofoam coolers on 200-degree pavement, a little girl’s first 10k with her dad—amuses them. Then we’re out of there and on the 12-mile march to the finish.

We needed the better part of 6 hours to do those last miles, but as anyone who’s ever been there knows, these times are all about the shared experience.

What impressed me first was Dean’s good-spirited indulgence of me—a knucklehead from the back of the pack—despite his having been up for two days and unable to eat for 30 hours. So depleted, it appeared to pain him just to stand up straight. But he stayed engaged, and engaging, the whole time.

I was also impressed that he never once complained or mentioned dropping; he simply put one foot in front of the other and made his way down the trail.

But the thing that impressed me most was how concerned he was about his family. That really seemed to bother him, particularly keeping his retirement-aged parents out all night.

At the finish they all joined us and we crossed the line together.

The Santa Barbara 100 RDs, Robert and Jakob, smiled at my jokes about this Karnazes guy slowing me down, since they know I’m almost always at the back. Afterwards, I gave Dean my buckle.

“A thank you for all the great stories over the years,” I said.

“And who knows,” I shrugged, “maybe someday you’ll read one of mine.”

Gracious till the end, he nodded like he sees it coming…

Wow, what an honour, well done for returning all the support and inspiration that Dean has given so many.

Yeah, you rock Dean! Thanks for all the inspiration over the years! Good one John for slowing down for Dean. 🙂 Write that book John – if it’s anything like Dean’s, it’ll be well worth the read.

Awesome, John. Somehow I’m not surprised by this story at all! That the two of you connected out there just shows that good people operate on the same frequency.