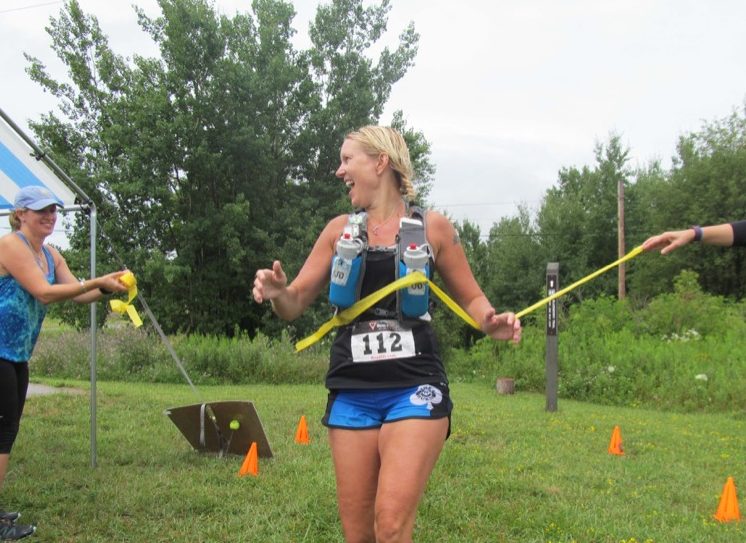 Kathy Koetje-Simin joyously breaks the tape for the women.

Mild temperatures and a gentle breeze in Central Pennsylvania’s Moshannon State Forest ushered in the daylight at Mid-State Regional Airport for the fifth annual Allegheny Front Trail Run on July 30, 2016. A light rain kept runners cool in the later miles. This year’s event introduced a new half marathon, and was the second year for the current Seneca 50K course. The Seneca 50K features some steep climbs and technical descents, including a northwestern part of the legendary Allegheny Front Trail, with seven aid stations.

Extra rain in May and June made the vegetation flourish and mandated extra pre-race trail care. Numerous volunteers spent hours getting the trail into nice shape.

Allen Russell, of Rome, clicked through the rolling course to victory, finishing in 4:42:06, peeling about 35 minutes off the best time posted on the new course last year. Twenty-two minutes separated Russell from Michael Daigeaun, of Philadelphia, and Ron Rovansek, of Port Matilda, took third.

“When I saw Michael D. there, I knew it was going to be a tough race and was hoping to stay up with him as long as I could,” recalled Russell. “Turns out he had me pace the first three miles or so and I didn’t see anyone else with us.” After three miles Daigeaun took the lead and Russell relented but kept within a range of a minute or so. “I ended up catching him just before the fifth aid station. I felt good, was really enjoying the trail and was having a hard time believing the elevation profile only called it around 3,600 feet of elevation—it felt like a lot more. Was also wondering when Mike was going to catch me and hoping I had enough left in the tank to sprint it out to the finish.”

Koetje-Simin was training for Eastern States, her first shot at 100 miles two weeks later. “I didn’t have intentions of ‘racing’ it per se, but just using it as a final test of how everything was feeling. Running is mental, and I had in my mind I had fewer miles to go than I actually did. I had been told at every aid station I was the first female, so that kept driving me to keep pushing, and as I got to the final miles I knew no one was going to pass me so I let up a little, even walked a little. My legs felt strong but my Achilles were bothering me, which they often do. Having run the race before can be a blessing and a curse. Blessing because you know where you’re at and how far you have to go. Curse because you know where you’re at and how far you have to go! I knew once I was on the Blueberry Trail it was all gravy after that. I love the course and think it’s a well-kept secret about what a great trail it is. It’s beautiful and challenging.”

“It was obvious someone had spent significant time grooming trails,” said Mark Fisher, of Mifflin. “Rhododendron was trimmed back nicely along stream-side trails, and one section had all the gnarly roots painted yellow. The volunteers made the aid stations fun. My favorite part of the race was the rain. Be sure to get that in the order for next year.”