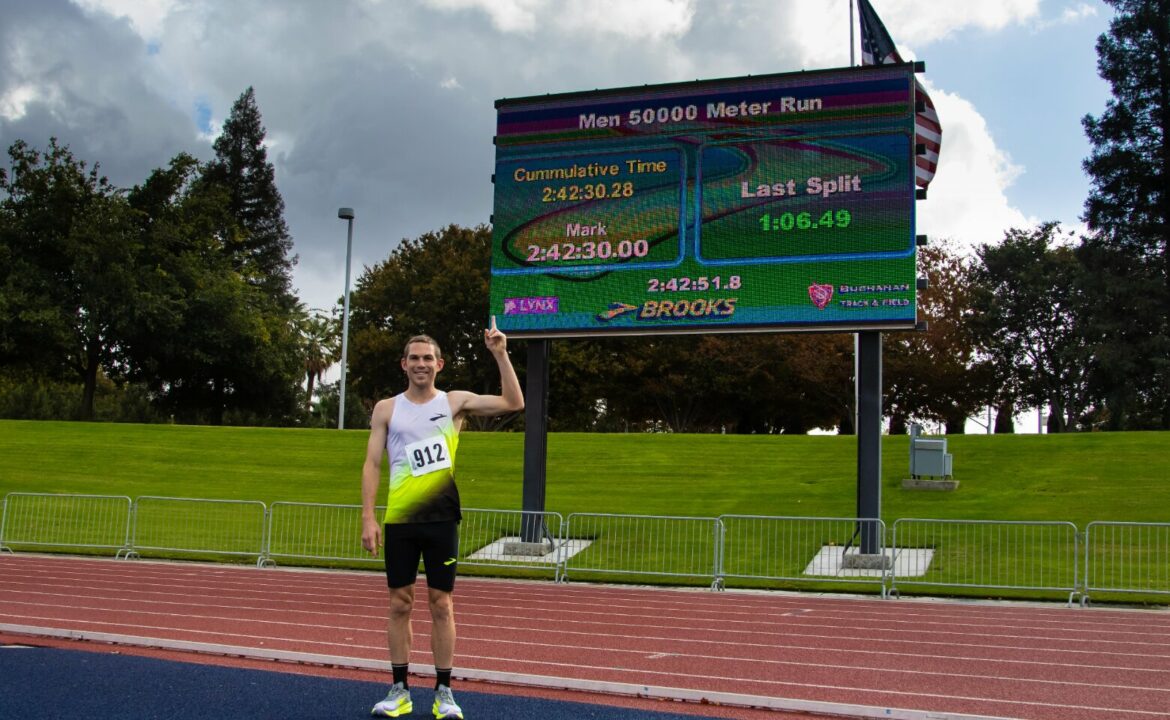 Stephen Mokoka of South Africa holds the current 50k World Record, running 2:40:13 at the Nedback Runified 50k in Gqeberha, South Africa, and breaking fellow South African Ketema Negasa’s former World Record of 2:42:07, set at the 2021 Nedback event. Prior to that, Albertson ran 2:42:30 in 2020 on a track in his hometown of Fresno to claim the record.

On Saturday, Albertson will follow a lead bike as a guide, and forgo the use of pacers during the attempt. Race directors Anil Rao and Steve Jaber have confirmed that at least three other entrants are pursuing American records at the combined 50k and 50-mile event. UltraRunning sat down with Albertson for an interview on Monday, just five days away from his World Record attempt.

UR: You are just five days removed from another World Record attempt. How are you feeling? What are you doing between now and Saturday?

CA: I’m not feeling too much right now. I’m not even really thinking about the race, to be honest. I guess on Friday afternoon when I get to San Francisco I’ll probably start thinking about it.

UR: How did you decide on the 35th Ruth Anderson Memorial Endurance Run as the location for your World Record attempt?

CA: There wasn’t a whole lot of decision-making. I’m doing the Valencia Marathon on December 4, so that’s the big thing I’m training for. I was going to do either a half marathon or maybe a 50k because I wanted to get the record again, and then Fernando Cabada told me he was doing a 50k in San Francisco to set the master’s record. I looked into it and realized that it wasn’t too far from me. I reached out to the race directors (and let them know) that I was interested in going for the World Record. The RDs figured out what they had to do to get an IAU label, get it certified by World Athletics and set up drug testing. We kind of just got it sorted out in the last couple weeks.

UR: It’s exciting to hear that there are going to be some other athletes going for records at the same time, both in 50k and 50-mile. Does that create a special kind of energy different from your previous World Record attempt?

CA: I think it will definitely bring some energy having other people there. Personally, for me, running it won’t be easier because I’ll be running by myself the whole time, whereas last time I had pacers. When I’m actually running, I’m not going to be able to lap them, so I’m not going to see them. At least there will be some people out there cheering in the park. 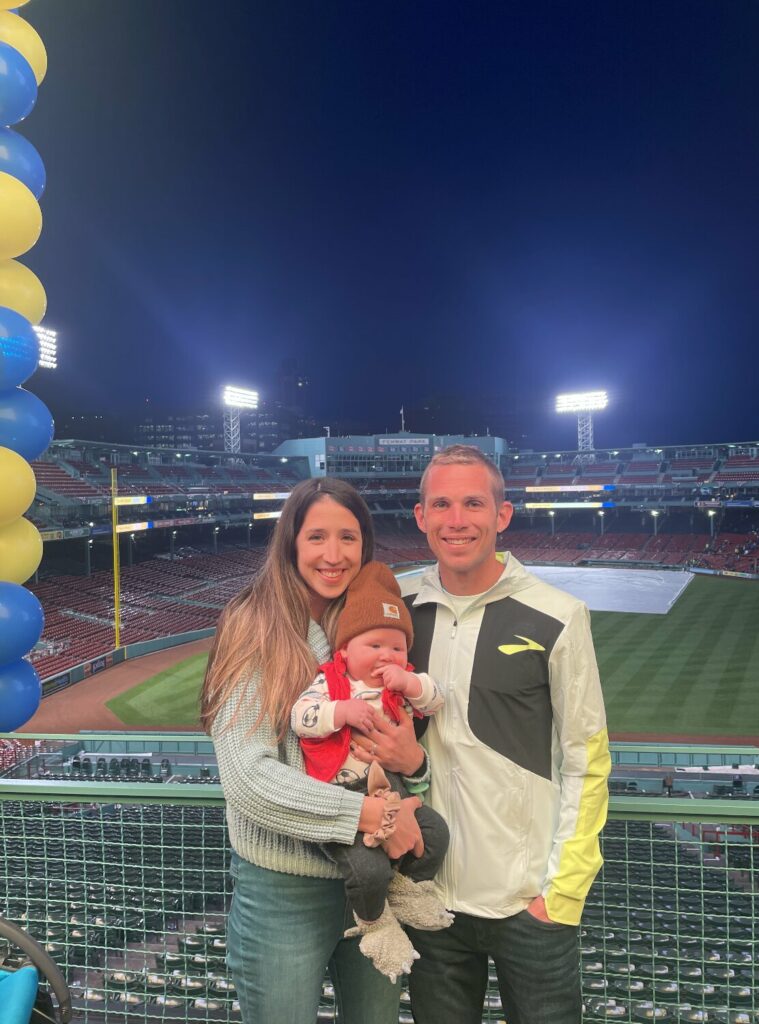 Albertson with his wife Chelsey and 10 month old son Luke after the 2022 Boston Marathon in April. Photo courtesy of CJ Albertson.

UR: It looks like you had a relatively light summer after Boston in April and Grandma’s in June. Was that planned or were you dealing with any issues?

CA: My summer was weirdly busy. There were lots of little things, but once we hit August, I was able to get back into a set routine and really start ramping up the miles and training. From Boston until August it was kind of up and down, not tons of training, but since then, training has been good.

UR: More specifically, how has training gone the last couple of months since you picked up some momentum?

CA: It’s gone alright. I wouldn’t say it’s been great, but nothing has been bad about it. I’ve been doing some longer runs, longer than a marathon, 25-30 miles, and those have felt pretty good. My speed on the longer runs has felt good. Running 5:10-5:15 pace feels faster than it has in the past. But my heart rate has been relatively lower when I’m at around 5:10 pace, I think I average 157. I ran 30 miles at 5:15 pace a couple weeks ago, my heart rate was low, but the pace didn’t feel like it has in the past. I’m still nine weeks out from my goal marathon. Typically, that’s how I feel 9-10 weeks out—I feel pretty slow. And then, as we get within 5-6 weeks, I start to feel good and some of my speed workouts start to feel more smooth.

UR: Instead of 125 laps on the track, you’re going to complete roughly seven, 4.5-mile loops around Lake Merced. Does that change your approach to the race or distance?

CA: The 50k distance has never seemed super long or much different from a marathon. The record now is almost 3 minutes faster than when I attempted it last time. This time, it’s at a pace where I’m doing it all by myself. When you run on the track you know what pace you’re going and you know you’re going to run the shortest distance. Whenever you run another course, you may end up running an extra quarter mile. So, there’s some uncertainty. Whereas on the track there’s not really any uncertainty. For this, I kind of have to rely on the timing clocks because your watch can be off a couple seconds a mile and over a 50k, that can be a couple minutes. If you’re only getting feedback once every 4.5 miles, you can get off. That’s actually a good question—I need to ask them where there’ll be clocks.

UR: The course is mostly flat, but not entirely with 100-feet of gain/loss per lap. Did you have any consideration for a completely flat course like you did in 2020?

CA: When I  train on a super flat loop, I feel worse than when I have slight undulations. I think it will be good. From what people have told me, I don’t think the undulations will slow me down, but they’ll be enough to mix up the muscles a little bit, mix up the rhythm and maybe even help. People run fast on that loop. I don’t think the elevation is really slowing many people down.

UR: What have been some key workouts that have given you the confidence to go for it?

CA: That long run, 30 miles averaging 5:15, is pretty close to what I have to do on Saturday. I’m going to run 31 at 5:09, so it’s not too much different. I felt pretty good at the end and I ran 4:40 or 4:50 for the last mile, and when I picked it up, I actually felt better. That’s really close to what I’m going to run, so I think that’s probably the biggest one. Other than that, I’ve done lots of lifting stuff. My legs feel strong.

I’ll be able to handle the distance, my legs will be strong and I’ll be able to run hard the whole time. I haven’t done any super impressive workouts, especially like speed, but I can grind out a long pace for a long time and with just a little bit of adrenaline in a race, I feel like that will bring me down into the 5-0’s. 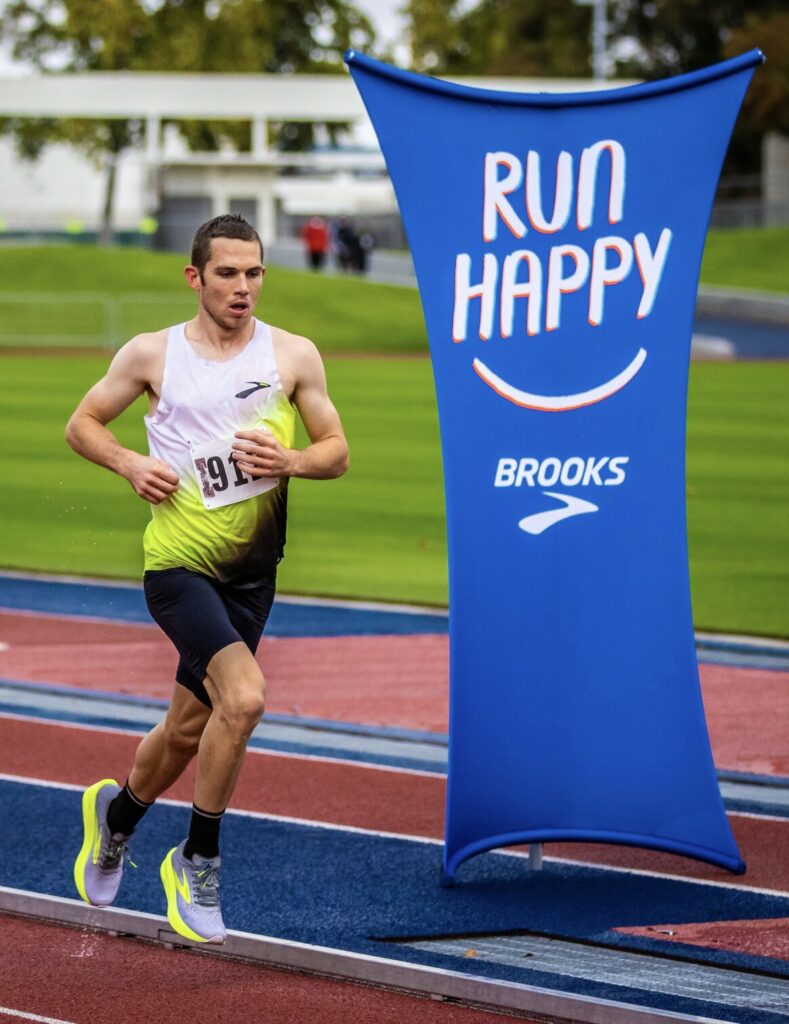 UR: We understand that you are aiming for 2 hours and 38 minutes. (5:05 minutes/mile); walk us through your pacing plan.

CA: I’m going to attempt to go out at around 5:05 pace to give myself a little bit of a buffer, because the World Record pace is 5:09. I don’t have a specific overall time I want to hit, I just want to break the record. Going out a few seconds per mile faster and if there’s any issues, like last time I had to go to the bathroom, or if the course is running a little bit longer, then I have some wiggle room as long as I’m under the record. Under 2:40 is nice.

UR: How do you balance coaching at Clovis Community College, raising a family and training at such a high level?

CA: It’s mainly about routines, so when I get into a good routine it helps. The days are mostly busy, so when I have time to run, I run. When you don’t have a lot of extra time you just do everything in the schedule because that’s the only time you have to do it.

UR: Ultimately, this 50k World Record attempt is really just a build towards a winter marathon in Spain. What does training look like for you after Saturday?

CA: At Valencia, I’m hoping to be right around 2:08 and get a nice PR. It’s usually a really fast race so it should be a good opportunity. Like that 30-miler at 5:15 pace is essentially the same as what I’m going to do Saturday hopefully, just a few seconds per mile faster. If I don’t sprint at the end, I’ll feel pretty good the next day. But who knows, things can happen, and you never really know how much you’re going to have to push.

Rooting for you CJ!

Glad I decided not to run RA this year, I’d just be in this guy’s way! Hoping he gets it!

But you wouldn’t be alone, hopefully you can come out and cheer? Should be very entertaining.

This is so bold, especially on a course which isn’t flat. Pacing is going to be tricky. At least weather looks perfect!
Much looking forward to getting lapped a few times on Saturday. Although this isn’t going to be good for our UltraSignup rankings, dang! 😉
Go for it CJ and, from a Brooks fan, Run Happy! 🙂
Jean.

See you out there Jean!