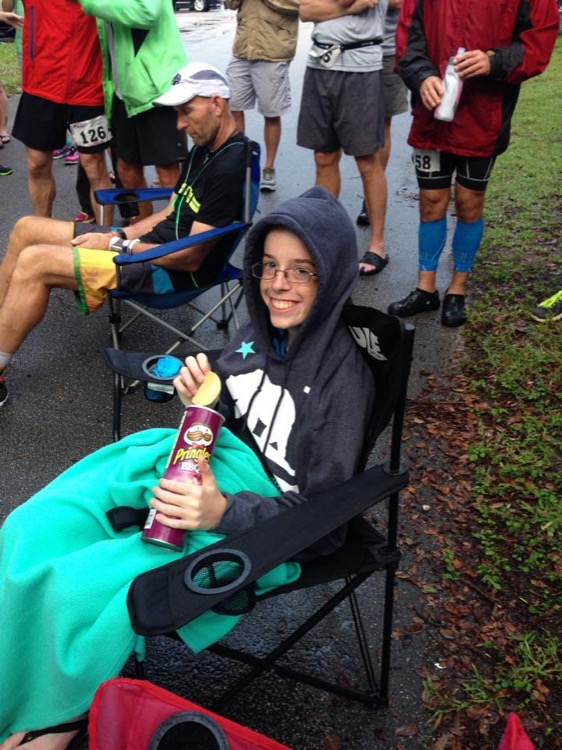 Age Is Only A Number

Like many utrarunners, Colby Wentlandt is motivated and inspirational. What differentiates Colby from the rest of the ultra-gang, though, is that at 14-years old, he has accomplished more than many will accomplish over their running careers. To date, Colby has completed over a dozen ultramarathons, including a handful at the 100-mile distance, and as of this past week, he ran 153.27 miles (246.66 km) in 48 hours—surpassing the existing American 23 and Under 48-hour Age Group Record—and as the week progressed, he completed a bit over 361 miles in the 6-day event, good enough for fourth place male in a competitive field. As of this time, we are awaiting details regarding what record this will encompass due to his age.

I had the good fortune to sit down with Colby in the midst of his incredible performance at Icarus Florida Ultrafest, held in Ft. Lauderdale, Florida, on a rain-soaked Saturday evening, roughly 12-hours prior to the race’s Sunday morning wrap up. When we spoke, Colby was already at some 330 miles with his goals set on putting in at least another 20 miles.

At a first glance, Colby, wearing glasses and a big, welcoming smile, is your typical 14-year old. According to his mom, veteran ultrarunner Shawna Wentlandt, he gets lazy sometimes. “I love to sleep, and eat,” Colby offered, his mom filling in that hot wings and Flamin’ Hot Cheetos are some of his favorites. He also likes to watch soccer games on television.

But once you get started talking to Colby, it’s clear that he’s far from your average adolescent. Colby laughs freely, and is passionate and engaging, but there’s also a sense of maturity and self-reflection that is perhaps the blend of a deep faith as well as a cultivated internal life. Most runners would agree that spending hours with yourself on runs leads to a deeper knowledge and sense of understanding that we earn along with the miles.

Colby was introduced to the world of ultrarunning at around eight years-old by his parents, Brady and Shawna, who are both ultrarunners. Colby helped to crew them at races before his own ultra-journey commenced. At 12-years old, Colby completed his first 100 miler—Ride the Wind 100—near Red Rock Canyon, Nevada, in 32 hours and 7 minutes; only three people, including Colby, finished the race. Based on Colby’s siblings, it’s clear that running is not something we inherit, but something we choose to do. Colby’s 21-year old brother, who’s in the military, is not a fan of long- distance running, while his 9 year-old sister has already completed her first half marathon.

Colby’s mother verified that he applies the same rigor to his academics that he does to running. He is currently home schooled, and anticipates that by 17 -years old, he will not only complete his high school degree, but his Associates degree from Liberty University as well. Colby has his goals set on attending the Naval Academy and becoming a doctor. He turns 15 on November 29th.

The idea of running a 6-day race commenced in late March, after Colby completed the Beyond Limits 100 miler in Mountain Center, California. He had already completed a few timed races (24-72 hours), so he knew what he was getting himself into. Colby was clear on why he wanted to run a 6-day race: “Because of the challenge. The opportunity to learn more about running and myself,” he said. In his down-to-earth demeanor, Colby explained that he believes that you get better at running by getting out there and running.

His training kicked up gear over the summer, when he typically ran fivfive miles, took an hour off, and then ran another 5 miles. The goal was to break it up a bit and see how his body reacted. His training for Icarus Florida Ultrafest included roughly 75-85 miles a week. When he’s not training for a specific race, his weekly mileage drops. For Icarus, he split his training between outdoor running and the treadmill.

Life during the 6-day

Colby slept around four hours a day for the first few days – a blend of excitement and determination – which transformed into seven-plus hours a day as the week progressed. He and his mom collaborated to share his race menu: grilled cheese, meatballs, spaghetti, popcorn, Boost, sweet tea, and he used Tailwind for fueling, too.

How about his body? “I feel fine,” Colby assured me. And that was evident by how easily he was able to sit and stand up. If you have ever run a 100 miler, you know how quickly you can lose that springy feeling! Not Colby – he was agile and fresh. Even in the pouring rain, his smile was bright. His feet were in pretty good shape, too. “I have a little pain in my small toe, and it led me to change out of my trusted Hoka One Ones to Altra’s, which seem to keep my feet happy.”

When I asked Colby what his motivation was, he was clear: “I’m competitive,” he said. “And goal driven. I like to inspire others to believe that anything is possible if you work at it.” He also added that he likes to take on new challenges. The list of runners who inspire Colby will certainly keep those challenges growing! Aside from his mom and dad, some of his favorites include ultrarunners Ed Ettinghausen, who broke the 50-54 AG record at Icarus with approximately 478.58 miles; superstar, Joe Fejes, who holds the current 6-day ultramarathon record; and Harvey Lewis, who amongst other feats, won Badwater 135 in 2014.

What about the naysayers?

If you’re an ultrarunner, chances are that you have had your share of the naysayer commentaries regarding knees and overall health. So I had to ask Colby about the topic, considering his age. “There are kids whose parents force them into doing things,” Colby said. “But that’s not the case with me. I love to run. I am choosing to do this. My parents support me.” He also added that he has met a lot of great people along the way.

Do his parents offer him training tips? “Sure,” his mother, Shawna said. “But we in no way pressure him to train or put on the mileage. This is something he wants to do. We admire his commitment.” She was clear that they monitor Colby in terms of injury and such, but they also encourage him to dream and to pursue his dreams. Shawna shared, “I feel blessed to raise this special kid and can’t quite grasp yet what he accomplished at Icarus.”

For those of you who have ever tried to run long distance, you will know that it’s impossible to be coerced into training and commitment. The drive and passion has to come from inside. “It’s important to know your limits,” Colby said. “You don’t want to get hurt or injured – but it is also important to try and surpass those limits now and then.” What’s next for Colby? “I would like to try and run a few fast 24 and 48 hour races,” he said, and then smiling, he was off, to go run some more!

Jodi Weiss is an ultra runner, author, and entrepreneur. You can follow her @Jodiw56 or learn more about her at www.JodiWeiss.net .