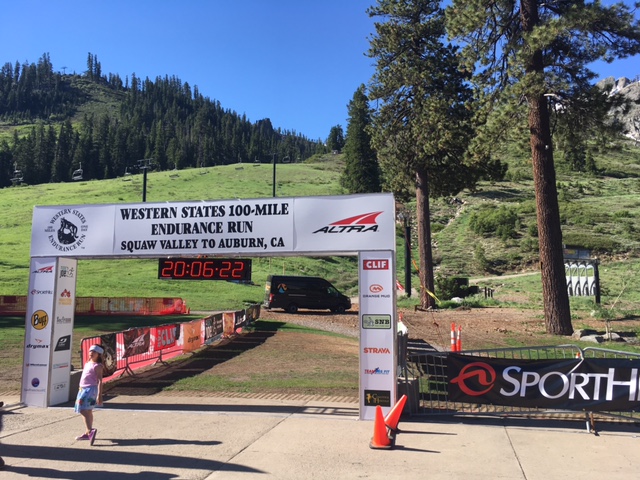 The past 24 hours weighed heavily on my eyelids as we began to close in on a successful finish at Placer High. Like thousands of others, my dream is to one day run Western States, and being so close to the action as a crew member is intoxicating. The sheer range of emotions – worrying about runners arriving late to aid stations, stressing about the lack of shade, and the logistical stress of timing everything just right. All of those feelings disappeared as soon as we hit the track in Auburn, but it’s left me with a bit of a hangover.

On the Friday before the Big Dance, packet pick-up was a nervous buzz of excitement as registered entrants anxiously mingled while making their way to check-in. Talking with runners, I heard stories from those fulfilling their dreams as they were about to take on the infamous course. At age 49, one woman running for the first time reminisced about how much she had learned from her experience with DNFs. More so than her previous 100-mile finish at Rio Del Lago.  Another runner in his early 40’s had finished Cascade Crest and Pine to Palm, and was anxious to finally have a chance at Western States as well as share the experience with his friend who’d introduced him to the sport of ultrarunning years ago. Or the father who had discovered a love for the mountains with the help of his grandfather, and was anxious to run in the high country.

And then there was John Fegyveresi, the next name on the wait list. I became familiar with John after watching “The Barkley Marathons” movie – a documentary made infamous because of its presence on Netflix. He came in third that year, behind winner Brett Maune and second place finisher, Jared Campbell.  John, who had been waiting six years to get into Western States, had flown to Squaw Valley on Friday to snag up a spot from any runner who failed to register at check-in. When the 1pm cut-off time came, it was reported that everyone on the list was present. So when Gordy Ainsleigh, founding runner of Western States, casually handed over his own race entry to John it was a heart-warming moment that reminded me what Andy Jones-Wilkins had told us exactly a year ago, “Here in Squaw Valley on the fourth weekend in June, we’re about love and faith and confidence and resilience.”

Which is why as a crew member and pacer last year, I was prepared for Saturday – the long drives to aid stations, the hours of waiting and the worries about whether a runner would show up injured. What I didn’t expect was to see so many runners come in looking like they’d been through hell and back. The distant stares were starting to appear too early due to extreme temperatures, and the smiles all but disappeared. While most runners have a crew, we are all out there providing support and seeing runners in distress puts everyone on edge as emotions run extra high.

And then I found myself balancing on a mini cooler as a makeshift chair somewhere in a field at 2:30 am in the morning. I’d been doing everything I could to stay awake – raiding the bag of gels, listening to the ham radio chatter at the aid station, and envisioning my run across No Hands Bridge. After being up for almost 24 hours, the day had been filled with “hurry up and wait” scenarios. Which happened to be exactly what I was doing – waiting to pace my runner to the finish line. Finally, in he came – strong and ready to finish the last six miles in under 24 hours.

But in just over 48 hours at Western States, it’s not uncommon for runners, crew members, volunteers, pacers and others involved to experience a dramatic range of emotions that’ll bounce you up, down and sideways – stretching your capacity for feeling to new limits. It’ll also leave you so exhausted and so inspired you’ll wonder what hit you, and where you might be able to find more.