A Rumble In The Woods

Wildfires scorched over 24,000 acres of the Deschutes National Forest just west of Sisters, Oregon late last summer. Thick smoke settled in the small town of just 2,000 people, delaying the start of school and forcing many to cancel their vacation plans. So when the Peterson Ridge Rumble announced that the only change to this year’s event was a shortened section of trail on the 40-mile race course, no one was complaining.

In its 16th year, the Rumble has evolved from a 30K/60K to a 20-mile/40-mile event which takes place on the Peterson Ridge trail system at the edge of the Three Sisters Wilderness. Spring weather at the eastern base of the Cascade Mountains is always questionable, and this year was no different. With 25-50 mph winds on Saturday along with rain and hail, anything was possible. After a brief shower during the 8am start of the 40-mile race (shortened to 35 miles), the sun came out on Sunday, April 8, and warmed runners for the remainder of the day. While the winds continued to whip, the blue sky and mountain views made up for it. 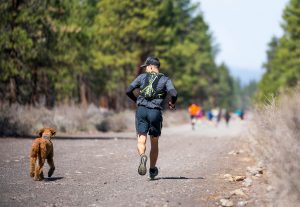 A runner and his canine companion make their way along the Rumble course. Photo: Paul Nelson

Runners start across from Sisters Middle School, and head out on a gravel road for a long stretch until turning off onto single track trails. The gradual uphill on the way out for both the 20 and 40-mile runners includes up close and personal views of the Cascade mountain peaks, along with some technical portions of trail along the ridge. The Peterson Ridge trail system was originally created for mountain biking, but is often used by hikers, horse riders and runners. Elevation gain for the 20-mile race is approximately 2,000 feet, while the 35-milers got about 2,500 feet this year. This race is incredibly runnable, and most enjoy the speedy pace.

Once runners reach the turn around point, the 20-mile and 35-milers both experience a gradual descent and merge together until returning to the gravel road that they originally started on. This takes 20-mile runners back to the finish at the Middle School, while 35-milers turn off at Whychus Creek for their next loop. With 400 registered for the shorter distance, over 80 dogs entered and great weather, the Rumble came to life this year. Whether it was the warm sun or the fast trails (or maybe it was just ABBA playing at the aid station), even the high school cross country team volunteers seemed to be full of energy.

Race Director, Sean Meissner, is an ultrarunning veteran and coach who is well-known by runners throughout  Central Oregon. He has also been directly involved with the Sisters High School cross country team, who happens to be the recipient of funds raised during this annual race. Sean moved from Oregon to Colorado a few years ago,  but continues to bring together an amazing group of volunteers to help make this event happen. The aid stations are stocked, the course is well-marked and the post-race spread is awesome. Put this one on your list as an early spring race, and you won’t regret it.