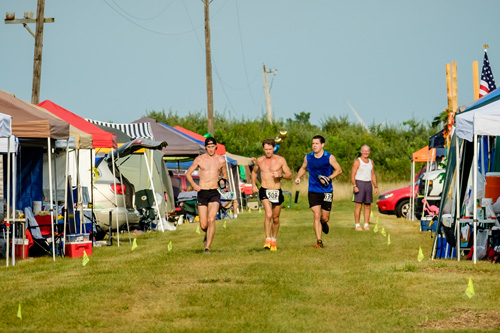 A Quarter Century of Howling

The 25th Howl at the Moon 8 Hour Ultra in Danville, IL, attracted runners from 15 states, some running their first ultra and others returning for the 20th time or more. The race bills itself as a perfect first-timer’s event because of its multi-surface 3.29-mile loop course, personal lap scorers and the abundance of on-course aid. A free Friday night pre-race pasta and free beer created a festive atmosphere beginning on Thursday morning, when the first runners started setting up along the course.

“The volunteers were over the top and made each station memorable. Kennekuk knows how to treat their runners,” said first-timer Cris Miller of Middletown, IN. Dave Dewey of Decatur, IL, added, “One of the best things is there is no pressure. Everyone runs their own race, at their own pace. The volunteers and runners made for a very enjoyable day. I couldn’t have asked for a better race to cut my teeth on an ultra.”

But it was veterans Scott Colford of Logansport, IN and Patty Schaefer of Springfield, IL, who stole the show. Colford, the course record holder, had early competition from John Knudson of Elgin, IL. But as the temperature rose into the mid 80s and the humidity shot up, no one could stay with Colford, who logged 55.15 miles to win his 9th Howl at the Moon. Knudson finished third overall with 50.35 miles. Asked how win number nine ranked with the others, Colford said, “This year was much harder. I battled a hip issue the last three hours that kept me from getting in quite as much as I would have liked, but I was very fortunate to have built a good lead and was able to keep moving so it worked out okay.”

Schaefer, with her characteristic smile and words of encouragement to other runners as she circled the course, lapped everyone in the field except Colford and Knudson for a second place overall finish. It was Schaefer’s second Howl win. “My plan was 15 loops for sure and 16 if everything went really well. Loop 14 was my slowest and killed off number 16. Knowing that, I was able to take loop 15 a little more slowly and get to out-and-backs with about 25 minutes to go,” said Schaefer. At the 7.5-hour mark, runners can switch from the 3.29-mile loop to a half-mile out-and-back course. “All said and done, my total was 51.85 miles and four decently painful blisters on my feet. The support and encouragement was insanely awesome and inspiring when I needed it most.”

The race is run in memory of Scott Hathaway, who passed away during the event in 2007, and in honor of former UltraRunning Magazine cover athlete Rob Apple who, sporting bib number 704, completed his 704th ultra-distance race and hit the 950-mile mark for total Howl at the Moon miles over 23 runnings. Race Director Marc Reddy credits Apple’s annual trips to the Howl for the event’s steady growth. “He has been a great ambassador for this race for 23 years. He loves to run here and we love having him here,” said Reddy as he handed out huge howling wolf medals to award winners. Apple, Colford and Schaefer all plan to be back in 2016.

Kennekuk Road Runners is a fine bunch of people in Eastern Illinois!