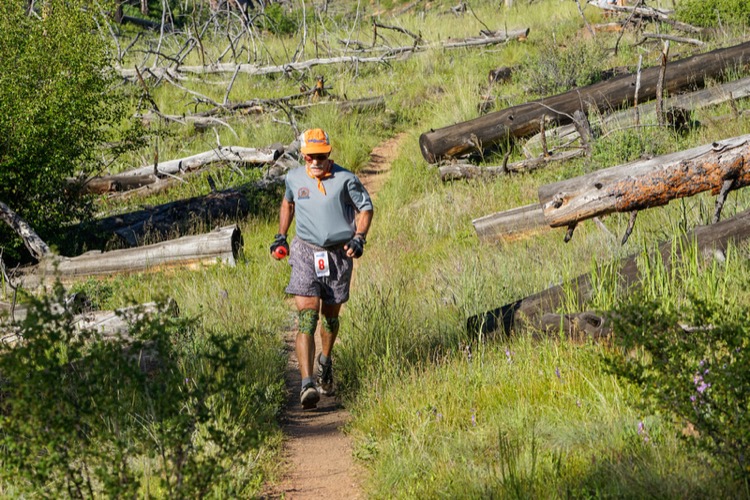 The North Fork 50 Mile/50K is not the toughest race, or the most rugged. By mountain standards, the elevation is moderate–6,800 to 8,400 feet. The decomposed granite trails, mostly single-track, are relatively smooth, with the exception of some fun rock sections. The many climbs are long, but not terribly steep. The scenery is varied and beautiful, from pristine pine forest to wide-open burn scar areas with spectacular rock formations and views of high peaks. It is a course that poses a challenge for first-time ultrarunners, 46 of whom finished this year. Runners with lungs and legs used to altitude are able to run the entire course.

Fifty-mile winner Michael Hewitt missed a turn at mile 33 and put in some extra miles. Evan Kimber and Andy Palmer closed on Hewitt while he was off-course, but he was able to gain a 20-minute lead by the finish. In the women’s race, California speedster Suzanna Bon had a half-hour lead on her nearest competitor by mile 22, but then she turned onto a road she was supposed to cross and ran several extra miles to the next aid station, where she realized she had been off-course and dropped out. That opened the door for Gina Harcrow to stage a remarkable come-from-behind victory, passing four other women in the last half of the race to take the win. The last one she passed was ultrarunning phenom Jamie Donaldson Rotar, running her first ultra after a long break. It was a treat to see this very fine comeback run.

In the 50k, John Nichols led through 20 miles, but then Willey Kinney surged and took the lead, winning by over 12 minutes. Greg Coplen also slipped by Nichols to take second place. On the women’s side, Mary Geiger led from the start and held on to win over 2014 champion Cindy Stonesmith, who had a strong finish, moving up from sixth place in the last 10 miles.

Perhaps the performance of the day was Alfred “Bogy” Bogenhuber’s 7:19 in the 50k. His time put him in the top half of the 50k finishers, a remarkable feat for a 75-year-old who came from sea level in California for the race. Bogy said he enjoyed telling all the people he ran by toward the end, “You’ve just been passed by a 75-year-old!”

Runners hung around for hours in the perfect weather after the race, enjoying the barbecue and camaraderie. The cheering crowd made the finish very special for the later finishers.

Randy Young is all smiles in the 50k. Photo: Jason Hatfield

As always, runners praised the wonderful volunteers they saw out on the course. North Fork draws many veteran Colorado ultrarunners to work the remote aid stations, and they treat the runners like royalty while not allowing them to dilly-dally. They make the race a true gem.