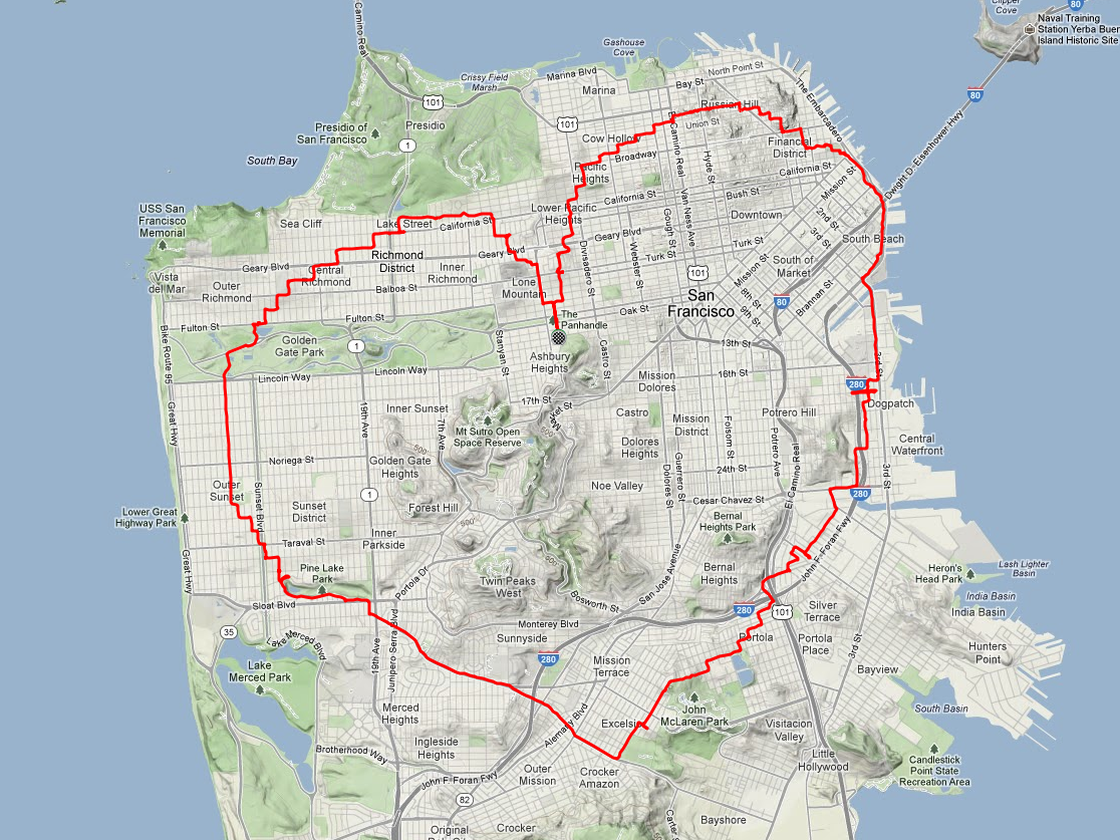 A athlete's route recorded via Strava around San Francisco.

A Hiatus From Strava

Last spring while training for my first 100K, I became dependent on Strava – an app built for just about everyone logging a daily athletic endeavor. Not only was I tracking my mileage but also time, elevation and routes, as well. This had been the perfect tool to help me record the simple data I needed during each of my training runs. I even had Strava friends who were giving me daily “kudos.” Needless to say, it  pretty much became my new favorite social network.  And then, I got injured.

Injuries are nothing to laugh at, and they sure don’t entice social interaction with other runners. So I dropped Strava. Hard. My second to last post read, “Last short run before a big back-to-back weekend. Then TAPER time!” Not surprising, my final post from 2016 had been a 24-mile run the day before my injury. While I healed with time and recovered both physically and mentally, I never felt like going back to Strava and had already deleted it from my phone. But my abandoned social running network was always lingering there, in the back of my mind.

As a running app, Strava tracks your running time (per mile), gives you a map of your route highlighted in orange, tells you how far you ran (miles or kilometers), and the elevation of the course. Other bells and whistles  include a list of everyone else who has run the same route, ranked by who ran it fastest. Following friends and   being able to see (and be in awe) of their daily efforts, is also an added bonus that turns the app from a tool into a social network. There’s something to be said for feeling like you’re all in it together. Even if you don’t know any local runners on Strava, there are virtual “clubs” you can join, too.

When winter hit hard in December, I retreated indoors knowing that there was training to be done (another 100K) but nowhere to run with over two feet of snow on the ground. Except the treadmill. While treadmills have their own tracking systems, all of the gear we’ve outfitted ourselves with for running outdoors is rendered useless on a stationary machine. And yes, Strava actually lets you enter workouts manually without tracking your route via GPS but the posts aren’t nearly as fun. The lack of map and elevation produces a white screen that feels as static as the treadmill itself. But Strava’s got a fix for that. Take a photo on your run and it’ll be added to your post – it doesn’t matter if it’s the view from a treadmill, or a single track trail. Sadly, I still wasn’t ready to log back in. Until last week.

Miraculously the snow began to melt. It took time, but the freeze/thaw cycle eventually eliminated most of the snow off of roads and paved paths, and I could finally escape what felt like months behind closed doors (two months, to be exact). With solid ground beneath my feet I breathed deep, sucking in the cool winter air I longed for. And I realized I missed Strava.  As a significant part of my past training when my runs would blur together day after day, the visual statistics that Strava provided helped me remember everything more clearly. It really was a daily journal for my running, and all I had to do was push the “start” button. So I’ve returned – and to my surprise, Strava has a clean new look. But everything (and everyone) is still there.  Just as I remembered.

This was exactly me last year. I left Strava because it had become uninteresting. I took an 8 month break and came back to it with new perspective. For me it ‘s just a social app and I also use it to get ideas on where to find new trails that I haven’t run. I’ve made several friends who I’ve met at races through the app. What I don’t do and never did is get caught up in KOMs and beating records. Only dummies who want to get constantly injured do that. And that’s one thing about Strava. You can see people overtrain themselves into oblivion right before your eyes. It’s a good learning tool to learn what NOT to do by watching people who overtrain and overrace.