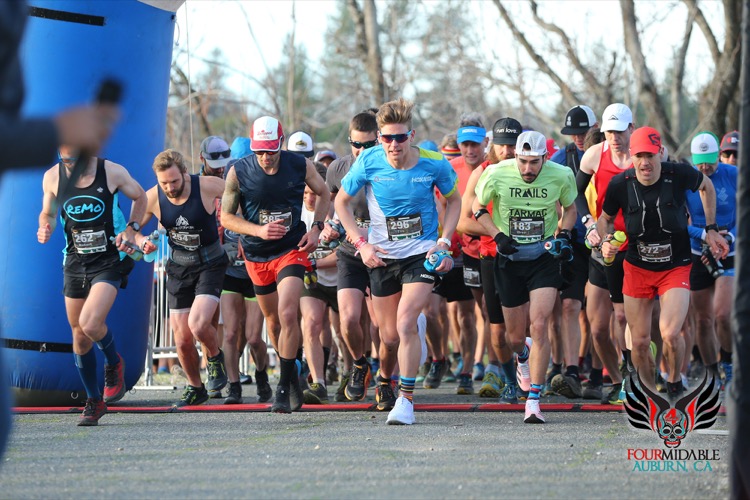 A February Challenge at FOURmidable 50K

This was the eighth year of the FOURmidable 50K, put on by SingleTrack Running, who uses their mapping sorcery to concoct a 50k that’s not for the faint of heart. While perhaps it pales in technicality compared to my last ultra at the Broken Arrow 52K this past June, it makes up for it in ever-undulating terrain.

Last year, the race was the USATF 50k Championship, so naturally the field was super deep. This year, returning champion Tim Tollefson was back, as well as some up-and-coming local runners and a few strong out-of-state racers.

By following Tim’s training this winter during his buildup for the race, I knew he was primed for a quick one and figured he’d be going for Max King’s course record. Without fail, he shot off the start line in fresh Hoka Cliftons (road shoes), putting nearly a minute on the chase pack consisting of nine guys, myself included. Within another few minutes, he was completely out of sight and we wouldn’t see him the rest of the day.

By mile three at the base of the first climb aptly named “Cardiac Hill” for its short but steep 18% average grade, our fearless CR-chasing leader had three minutes on our pack. The second group however, stayed bunched together, and as we wound our way up the switchbacks to the top of the ridge and the Pioneer Express Trail, I moved myself up with my early season well-trained climbing legs.

After a third of the way, I felt great as the trail pitched upwards to climb number two, also known to the locals as “Training Hill,” averaging 18% grade and nearly a mile long. This nasty climb featured the most sustained hiking of the day, as well as many hikers and a group of teenagers running 20-30 second hill sprints next to us on a flatter section of the climb. Someone even had a speaker bumping out beats that spiked the adrenaline a bit and I ended up burning an unnecessary match as I closed in on Brett Hornig and Drew Scott.

Over the top, Brett rolled a bit ahead of me as I hydrated and fueled, while we gapped Drew on the winding Olmstead Loop Trail. Down we went into the Knickerbocker Aid Station for cheers from friends and volunteers like Adam Kimble and Meghan Laws. Tim had a reported six-minute lead on us at this point. 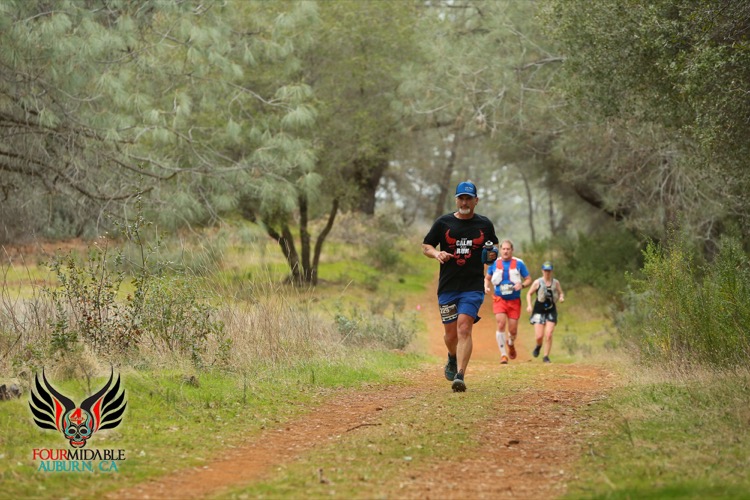 In my pre-race planning, I knew we had roughly 10 miles of runnable terrain ahead; this was where I needed to stay strong while stringing together some quick miles. Unfortunately, I lost Brett as he was significantly quicker our second time through the Knickerbocker aid station.

As I approached the marathon mark, I could feel some fatigue settling into my legs. This is where I buckled down mentally, as I knew I was in third. I had no doubt I could hold it to the line with about an hour remaining—a quarter of the race—so stayed on top of my fuel, hydration and positive mindset. A few deep mud crossings, horseback rider flyby, and the enthusiastic Cool aid station volunteers came into view.

I didn’t run the Way Too Cool and Western States Meadow to Highway 49 Descent particularly fast because I was definitely tired at this juncture. Unluckily, that dreaded wave of fatigue started to rear its ugly head only a few minutes later as I finished crossing No Hands in the heat of the day. A spectator said Brett was five minutes up the trail, so with second place likely out of the picture, I put my head down and started to grind—this is what I came here for.

I passed a juncture that sent me rolling downhill and found that final wind of competitiveness deep inside that I needed to push, opening up my stride on a wide section of trail knowing the actual Overlook climb was only moments ahead. A short, but technical and steep single track back down caused a few expletives from my quadriceps, requiring every last ounce of my focus to not tumble down towards the American River.

While winding my way up what were the last few pitches of the race, alternating between power hiking and jogging, I caught a glimpse of the runner behind me. I bit my lip and dug deep up the quarter-mile climb with a 22% average gradient—one of the more insulting, kick-in-the-face type of climbs I’ve ever faced at the end of the race.

As the finish line came into view, I began to hear cheers and music over the PA, so I started to run. Simultaneously, satisfaction and utter fatigue flooded my body as I came to a stop, with my hands on my knees and a smile-grimace across my face. I landed on the podium with a couple of experienced ultra veterans, won some cash, and executed a smooth race on all fronts to kick off the new season—I was ecstatic.

Across the line, Race Director Paulo Medina congratulated me on second place, which surprised me as I knew I had been the third man. Later, we unfortunately learned Brett had missed that critical turn at the top of the false summit with just a couple miles to go, resulting in a most honorable DQ.

It was a beautiful day for smart running for the entire podium. Tim ran just 12 seconds slower than he did in 2019 (he thought the course might have been a little longer this year), I nearly broke four hours on a course with 6,000 feet of climbing, and the third-place finisher, Robert Ressl-Moyer, moved up all day.

Post race we all hung out in the sun overlooking the hills and canyons below, cheered finishers on as they came across the line, reminisced on an enjoyable day and prophesied of the fun times the rest of the year holds for us all. As the afternoon conversations wore on it became clear; no matter where you were in the pack, a winter ultra with challenging terrain on historic trails like the FOURmidable 50K, can inspire motivation and spur fitness for all types of events in the spring months ahead.