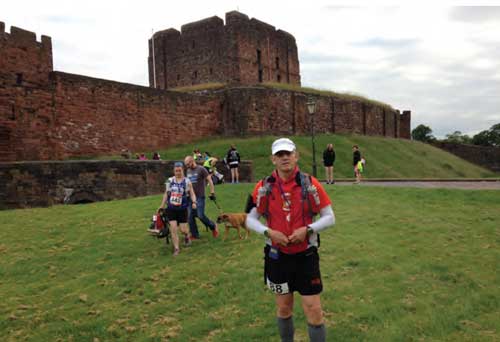 69 Miles/Two Days Across The British Countryside

The idea of doing this iconic event sprang up a few weeks after the Trans Rockies multi-day run in 2013 – after the brain had suppressed the pain of that undertaking. But then a five-day stay in the ICU at Johns Hopkins hospital after a “cardiac event” in December put a lot more than just completing this event into question for me.

Since my situation and medication limited my cardiac output, I was (am) limited to a top HR of about 110, which for me translates to about a 13-min/mile pace. Heart rates higher than that made my heart work harder than the doctors wanted. The discussion became “how long can I stay at that level?” The consensus of the cardiologists was “We don’t know – there is not enough data.” They also did not recommend “extreme distance activity” due to the cardiac stress on the heart – for anyone. But we did all agree that my condition was very stable. My main concern was not if I could moderate my effort appropriately, but: could I get through that second day? I decided to go for it!

The Wall Run occurs over two days; 33 miles to camp in Vandelande, then 36 miles to Newcastle on the east along the North Sea. The route traverses along Hadrian’s Wall, which was erected 2,000 years ago by the Roman Emperor Hadrian to keep out Scottish barbarians. I was informed by the Scottish participants that the Scots were the only tribes not defeated by the Romans. That odd twinkle in the eyes was a bit ominous as we headed into the unknown together…

We had to carry additional water and nutrition because the support stations were at least seven miles apart and not as well stocked as we are used to here in the US. They really wanted us to be prepared for variable conditions. Fortunately, we had ideal conditions both days this year.

The first 15-mile section to Lanercost was flat, paved rural road along the Eden River. I maintained a steady 13-min/mile pace and felt good about my decision to go with my Hoka trail shoes. The extra cushion was saving my feet a lot of pounding. We got strung out, with only occasional sightings of other runners. When possible, it was great chatting with other runners, mostly locals who were astonished to find a “Yank” among their ranks.

Leaving Lanercost, the run became decidedly hillier as it passes several forts past Birdoswald, Gilsland and Greenhead. We started to climb a little. Nothing dramatic, but the pace slowed noticeably. We crossed a lot of fields and back country roads, and entertained a lot of sheep and cows. With 12 hours of daylight, we did not worry about running on narrow back roads in the dark or remembering to run on the opposite side of the road.

Just when approaching the highest hills, we dipped down to the overnight campground beside the massive ancient fort of Vindolanda. At this point we had climbed to around 750 feet above sea level, so I was thinking it would be downhill from there.

The overnight gave plenty of time to recover in the refreshment tent and shower. A volunteer gave me a ride to my cabin at Herding Hill Camp site three miles away.

With no TV or radio, all I had to do was prepare for the next day’s run. I had the best night’s sleep before a long run than I have had in a long time. The next morning, I actually felt pretty good. There was some stiffness and a couple of hot spots on the bottom of my feet and little toes, but I actually felt ready to run. Never underestimate what some nutrition and good hydration, combined with a few hours of sleep, can do for the weary body.

The next day started off with a wicked steep hill. After climbing a mile or so on more paved road, we took a sharp right onto a trail up one of the steepest hills I have ever had to climb in over 100 ultras. It was not so much a trail as a path through the lush grass. We were likely to fall over backward or twist an ankle from all the ruts from sheep hooves. There was a nice view from the top. Fortunately, the route from there was predominately slightly downhill, but still mostly asphalt. Ugh! But wide pastures marked by three-foot-high stone fences in neat squares made it very scenic.

We then passed through numerous little towns lined with quaint cottages with families having a spot of tea on their porches, watching the crazy runners go by. They obviously got a kick out of a Yank in their midst so I had a lot of nice, short, conversations.

The next aid station was next to a large stone building I initially thought was a church but was actually the Hexham Academy, as I was informed by two young ladies jogging along the stone wall. From there, we went down more long roads demarking large fields.

Leaving Hexham, we were on a mission to get to the bridges of Newcastle Gateshead on the River Tyne. This is a long section that took us past some post industrial heartland and the pleasant flatter riverside paths towards Wylam, and on to the final transition at Newburn/Tyne Riverside Country Park. At this point, it was head down and focusing 12 feet ahead. The bottoms of my feet were hurting and both little toes throbbed with each step. It actually felt better to run 16-min/mile than to walk; my shoulders ached from carrying my hydration pack and mandatory gear.

After a long, two-mile section along the River Tyne, then across the Millennium Bridge, we reached the finish arch. I had a short chat with runners I had been leapfrogging all day and then I congratulated myself for getting a room at a hotel about fi ve minutes walk, or 15 minutes if you had just run 70 miles, from the finish. After crawling into my room, I ordered room service with pitchers of orange juice and water, settled in to watch the World Cup, basked in the satisfaction of “another one in the books” and mentally composed a letter to my cardiologist.