Ed Note: 5th place for Men was a 4-way tie from our Voters. Women had a Tie for 4th, which will be announced tomorrow. 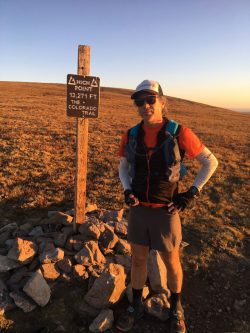 Bryan Williams at the high point of the Colorado Trail. Photo: Eric Truhe

Williams took the Collegiate West option, which is a little longer (83 vs. 78 miles), with more vertical gain and a generally higher altitude, than the Collegiate East route taken by other FKT trips. Nevertheless, he beat Scott Jamie’s 2013 time by over 7 hours.

“Bryan had his sights set on the CT for sometime. Like Cat, he did is recon, his homework, then sheer drive got it done.”

“I recall Scott Jaime talking about the pain and suffering that would be required to beat his time.”

This popular and logical route traverses the Presidential Range in NH. Since 2009 the FKT has been traded back and forth several times between Ben Nephew, Ryan Welts and Jan Wellford, often beating each other’s times by just a few minutes. Ben Thompson took nearly 5 minutes off of Nephew’s 2013 time.

“This is classic FKT stuff: a strong local community of talented guys and gals constantly challenging each other to take it up a notch!”

Following on 2014’s self-supported/self-powered tour (and FKT at the time) of Colorado’s 58 14ers, Simoni upped the ante to include the highest 100 peaks in the state; he biked to the base and then climbed every official summit over about 13,800 feet. The high 13ers are more obscure and some are technically more challenging than the 14ers. Simoni biked 1,720 and hiked 624 miles, and gained enough vert to get into outer space – 247,810 feet by foot and 136,374 feet by bike. 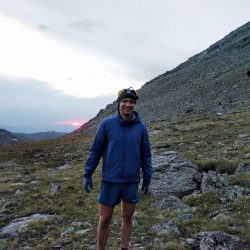 The LA Freeway links Longs Peak with South Arapaho Peak in Colorado’s Rocky Mountain National Park and Indian Peaks Wilderness. The route follows the crest and summits all the peaks, traversing roughly 34 miles, mostly above 12,000’ elevation, and requires numerous sections of 4th and 5th Class climbing. While this was envisioned by Carl Pfiffner in the 1950s, it wasn’t completed in a seamless push until 2002, when Buzz Burrell did it in 2 days with a bivouac. Messner was only the second person to complete the LAF, and he set an entirely new standard by doing the route in only 16 hours and 59 minutes.

“My intimate knowledge of this route makes me one of the few that will understand how amazing this time is. I could see this time standing for a decade and we shouldn’t wait that long to acknowledge it.”

“This is an extremely niche route that I hope will gain greater prominence (it’s SO GOOD!), but will always be limited by its technical nature and the locals-knowledge needed to really kill it. Which is fine. That’s what FKTs are all about, really.”