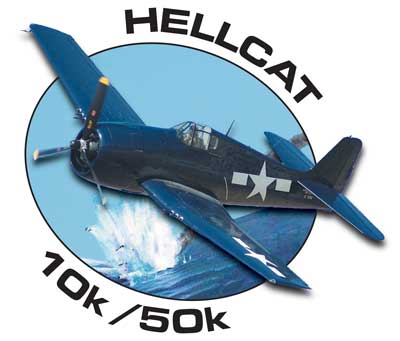 The Hellcat 50km race on Jan 9 2016, is held annually to commemorate the F6F Hellcat Navy fighter of WWII fame. It is held on the old Navy air base in Green Cove Springs Fl. The base is now an industrial park but the old runways, bunkers etc. are still there. The race loops the outer perimeter 5 times . The runners run through “ old Florida” cypress swamps on dirt roads and trails past old bunkers and even the remains of one Hellcat fighter that crashed during the war. The race starts and ends at the Military Museum of N. Florida and all runners and their families had free access to the museum.

Amie Dworecki on her way to the win. Photo: Chris Rodatz

Thirty runners competed and times were exceptionally fast due to the near perfect weather . Temps. started out and stayed in the 50’s. Even the hallowed Florida humidity was down and rain held off until after the race was over. The overall winner, not to mention 1st female, was Amie Dworecki from South Bend Indiana who , in her first ultra, blistered the course in 4:13:44. The first male was Jeffrey Porter from Deltona Fl. in a time of 4:59:32. An icon in N. Florida running circles who deserves honorable mention is the venerable 76 year old Richard Vance from Palatka Fl. who finished in 10:29. Richard’s mantra is RFM ( Relentless Forward Motion) until he finishes ,which he always does.

After the race, runners and families were feted with burgers, hotdogs and tours of the old base and the military museum.