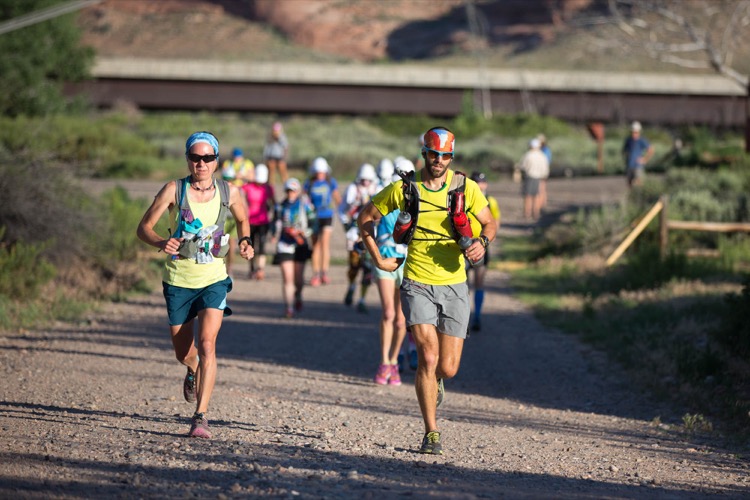 Unique beauty, amazing wildlife and profound solitude – all the elements of true adventure – rewarded racers willing to brave the strenuous 2015 Desert RATS Kokopelli 150 journey. Having completed the 11th annual 6-day stage race, racers experienced why we are the longest running stage race in North America. Vast landscape and ancient obstacles combine to create the rugged and stunning beauty of the Kokopelli Trail. With a small intimate field Desert RATS was much more than just a race.

Runners ran from Grand Junction, Colorado to the world famous Moab, Utah along the beautiful 143-mile Kokopelli trail course. Distances ranged day to day between 9 and 42 miles. This was a grueling year that challenged the most seasoned athletes, yet it was designed so that less experienced ultrarunners can also train for and successfully complete the course. The entire length of the trail is absolutely beautiful with jagged canyons and breathtaking vistas. The racers who truly enjoy the event and gain from the experience are those who appreciate the beauty of the land, the camaraderie of other adventurers, and the thrill of relaxing in the Colorado River at the end of the day.

While some raced, others were there to test their mental and physical limits. For both the men’s and women’s winners this was not their first rodeo. Becky Kirschenmann from Klamath Falls,OR had her second win. She set new records for both stages 4 and 5, eventually setting a new women’s Desert RATS course record. Ryan Guldan of Denver, CO came back for his 3rd win in a row. With a shortened distance on the Expedition day, Ryan now holds the record for the long stage. This year had many amazing racers- like Jane Herzog of Tacoma, WA who came out for her third time and was finally able to conquer the Expedition stage. Or Gene Dykes 67 from Bala Cynwyd, PA, a marathon specialist who ran a smart race. He downloaded the suggested mapping app and was able to do the entire 143 miles event without a single wrong turn. He smiled the whole way, stopped to take pictures, and still finished with a time of 36:19. Then there was Tara Tulley from Springville, UT who also stayed on track the entire time thanks to the mapping app. She was chasing cut-offs the entire time and gutted it out to be one of the few official finishers, finishing every stage within the time limits. Jim Willet of Toronto, Ontario Canada suffered early on when he arrived in Utah to find his luggage had been lost, he rose to the challenge and started the race in borrowed gear. This year saw four racers receive the sub 30 hour award: Ryan Guldan (Denver, CO) 21:39, Becky Kirschenmann (Klamath Falls, OR) 22:55, Sada Crawford (Driggs, ID) 27:54 and Leire Elosgul (Spain) 28:12 (unofficial).

This adventure is not for everyone. It is a huge challenge. While every racer’s week was different, the common experience was the grand scale of the event. The heat was extreme, the beauty was vast, and the friendships ran deep. Our hope is that as they experienced our race, and traveled the incredible landscape, they discovered a piece of themselves.