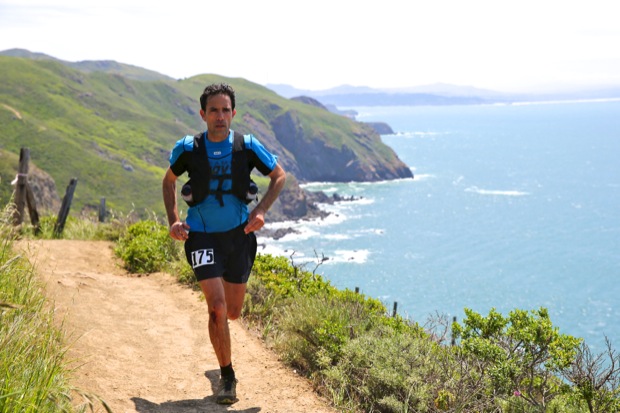 Last year I exhausted much of my travel budget to visit the French-Italian Alps where I ran the Ultra Trail du Mont Blanc. Though I figured 2014 would need to be a year of close-to-home racing, my European experience left such an impression that I couldn’t resist signing up for at just one out-of-area ultramarathon, both as an excuse to explore new trails and to mingle with another running community.

This year that race would be the Miwok 100K, a 62-mile tour of the Marin Peninsula just north of San Francisco. Miwok was first run in 1996 and, in eighteen years, has gained reputation as a “classic race” eliciting the likes of Anton Krupicka, Dakota Jones, Dave Mackey, Hal Koerner and other top talents. Nowadays, the allure of international competition and prize money elsewhere has reverted Miwok back to a low-key but still highly regarded and well-organized event.

The race begins an hour before sunrise beside the Stinson Beach fire station where some 400 runners have gathered. Just before the gun I jog up a dark street, away from the masses, where I can hear waves lapping the shore as I draw deep breaths of thick, Pacific air, its salty taste a far cry from the thin, dry air back home. One hundred kilometers is a strange distance and this will be my first go at it. Do I pace it like a 50-miler? Or perhaps it’s long enough to encounter the onset of some 100-miler symptoms? I finish my warm-up, rejoin the herd, and after a quick countdown we’re off.

We immediately funnel onto single-track and climb 2,000 feet in just over three miles. I come into this race with a solid six week training block behind me feeling fit and more confident than usual, so I hammer the ascent to hang with the lead pack comprised of Gary Gellin, Chris Wehan and a third guy, all Californian runners who know these trails well. The four of us reach the ridge at dawn and cruise north along the esteemed Marin Coastal Trail. The ocean fog diffuses any hint of the rising sun, casting a flat light upon the sloped trail that commands acute focus and good balance while I do my best to keep the leaders in sight.

For ten miles we roll through mossy, old-growth Redwoods. Occasionally I catch a glimpse of the ocean through the massive trunks that line the soft fire trail; its vast blue expanse stretches as far as the eye can see. At the northern-most point, we drop steeply to the Randall Trailhead (mile 17) where we reverse, climb back up Randall and proceed south along the same route past all the oncoming runners. Gary and Chris hold a two-minute lead and I am in a comfortable (if lonesome) third.

I reach Cardiac Hill (mile 27) still just a minute or two behind Gary (Chris has bailed, leaving me in second place) but already I sense difficulty. My hip flexors and glutes have grown tight and I’m unable to drop the descent to Muir Beach as quick as I’m capable. My stomach feels fine and I’ve stayed on top of my calories. It’s early; perhaps these are symptoms of dehydration? At Muir Beach (mile 32) I consume copious amounts of salt and water but still struggle to find a comfortable rhythm. Ultimately I admit I probably pushed the first two climbs too hard and now I’ll pay the price as I grind out the second half of the course on nagging legs.

Miwok contains seven prominent climbs ranging from 800 to 1800 feet. All are steep but runnable and five of them are encountered on the back half of the course. From Muir Beach (mile 32) to Tennessee Valley (mile 37) to Rodeo Valley (mile 42) back to Tennessee Valley (mile 49) back to Muir Beach (mile 54) I make my way over the hills trying my best to enjoy the panoramic views of San Francisco Bay, the Golden Gate Bridge, and the Pacific Ocean. Gary’s lead grows so I revise my goal to hold on to second. Tightness spreads through my quads, knees and calves as I descend to Muir Beach for the second time, but the cruelest climb, a 1500-foot grind back up Cardiac Hill at mile 57, still awaits.

I take a moment at the aid station to fuel up and stretch out for the final eight miles, knowing I’m comfortably in second place. Wrong! As I wash down a hummus-filled tortilla and screw the lid on my handheld bottle, Jean Pommier jogs down the trail. He’s in third place, but soon I’m about to be. Oh shit! Seeing him ignites a fire beneath me and I haul ass up the road toward the final climb.

Sometimes no amount of water, salt, food or stretching has quite the same effect as the sudden realization that the race is yours to lose. Thank you, Jean, for surprising me and activating my fight-or-flight reserves. I alternate between power-hike and power-shuffle up Cardiac Hill glancing far too often over my shoulder to convince myself that I can hold Jean off. I crest the ridge, blow through the final aid station, and grit my teeth for the three-mile drop to the Stinson Beach finish line while trying very hard not to eat it on one of many ugly flights of railroad-tie stairs during the descent. Amazingly, it works. I finish second in 9:40:41, a solid 40 minutes behind Gary but just three minutes ahead of Jean (who later admits he was more concerned about fourth place who was just minutes behind him).

Pace-wise running 100 kilometers is much like running 50 miles, but lends itself to the tenacious runner rather than the swift. One must push aside the desire to be done at mile 50 and tackle those last twelve miles with obstinacy. I never dug as deep as 100 miles often requires, but the Miwok 100K provides a worthy challenge nonetheless.

Thanks to Gary and Holly for being incredible hosts and providing accommodations in Mill Valley, and congrats to Gary on his victory! Finally, thanks to Tia Bodington (the race director) and all the amazing volunteers for putting on a superb event. To my Rocky Mountain cohorts: if you need an excuse to escape our crazy Colorado spring weather, visit Marin and run Miwok; you won’t regret it.

Thanks so much for the race report, Brendan, and great course coverage! You are incorrect, however, in that there were a lot of “top talents” out that day. Miwok 100k is one tough course, and anyone who can complete it is a fantastic athlete. It truly bugs me that so many running articles only focus on what they pick out as the “elites” when there are actually elite runners from beginning to end. Please, next time also add a little note about the women’s race for those interested. 🙂