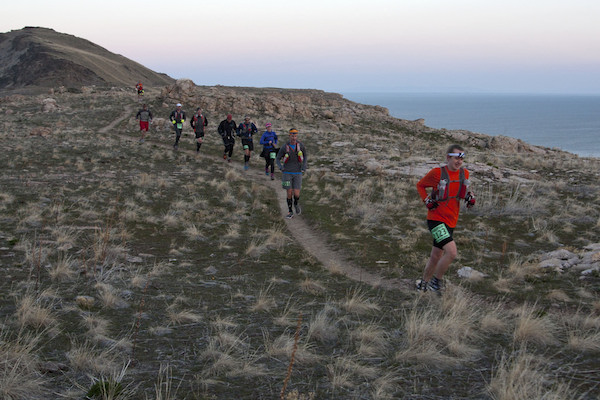 This year marked the ninth year of the Antelope Island Buffalo Run and once again, several hundred runners showed up for an early season race to test their legs and conditioning.

The weather this year was much better than last year’s temps in the 20’s and wind chills in the single digits.  We were blessed with low 40’s overnight, no breeze until sunrise, and high’s approaching 60 on both Friday and Saturday, and glorious sunshine.

I sent about 65 100-mile runners out on to the trails at noon on Friday.  People love the noon start, they get to sleep in, take their time showing up, and seem to be a bit more relaxed.  49 runners crossed the finish line for a finish rate of 75%, the highest it’s ever been.

The men’s winner, local runner Matthew Van Horn (16:40:11), led from the outset.  Matt has run the 100 the past couple of years and finshed well.  I saw a post of his after the race where he had this comment about his win, “I thank God for my running abilities, and Karl Meltzer for not showing up this year”.  Tomokazu Ihara from Japan came in second with a time of 17:17, bettering his 2013 time by over 30 minutes.  Another local runner, Jeremy Suwinski rounded out the podium with a third place time of 18:34.

The women’s winner, Jennilyn Eaton, had to overcome some digestive issues that forced to stop for about 45 minutes.  She would go on to set a women’s course record of 20:18 and 8th place overall.  Janice Cook came in second with a time of 22:17, with Carol Manwaring rounding out the top three women with a time of 24:12.

On the women’s side, local speedster Amie Blackham came in first with a time of 7:57:03.  This was her second time winning the 50-mile distance on the island.  I have been telling her for several years that she is capable of going under eight hours, and this year she did it.  Melissa Soper was just a  few minutes back with a second place time of 8:04:12, with Cherri Marcinko rounding out the top three women with a time of 8:20:32.

I would like to note that Peter Van Horn, Matthew Van Horn’s older brother, completed his first 50-mile event this year.  Peter came in contact with a 28,000 volt powerline at work a few years ago, was clinically dead for a short time and had third degree burns over 30% of his body.  He not only finished the 50-mile, but did so in a time of 8:46.  He was so excited and it was fun to just watch him relive the race to anyone that would listen.  Way to go Peter.

This year’s event went off without a hitch, although the bison (500 of them on the island) seemed to be a bit more ornery than normal.  I had numerous reports of runners being charged and having to go around to avoid bison on the trails.  I saw one video that a runner took showing a charge.  These charges are usually pretty short and just serve notice that you are in the buffalo’s personal space.  All the runners are warned before the race about what to do when encountering buffalo on the trail.  Many runners find that the opportunity to share some trail time with these awesome creatures to be a big draw for them to come out to the race.

Thankfully, no one was smacked, unlike last year’s spectator that took a buffalo head to the chest when he harassed one of them during the race.

Many thanks go out to my wonderful volunteers.  I think I had about 130 of them this year, and they are a large part of why the race goes so well.  Many thanks, as well, to my wonderful wife Karen for cooking up another 40 gallons of buffalo stew for hungry runners.

100 mile runner Jeremy Bradford and one of the island bison keeping an eye on each other. Photo: Lori Burlison