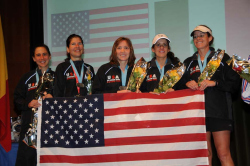 In the end, 631.4 miles was enough for the five women of the U.S. National Team to earn their first trip to the podium in the 24 Hour World Challenge.

Led by Jamie Donaldson’s 136.8 miles, the women bested the Italian team to claim second place behind France. Donaldson’s total put her in fourth place among women and 20th place in the overall standings.

In all, 206 of the world’s top ultrarunners battled tough race day conditions May 2-3, with temperatures reaching a high of 77 degrees as the runners clicked off laps on the 1.113 km (.7046 mile) course in Bergamo, Italy.

The conditions yielded lower milage totals than expected for the elite field, but each of the five Team USA women easily surpassed the 100-mile mark:

The second-place finish was hard-earned, Bednosky reported on her blog, as they battled the Italians for hours on the course. But while the U.S. women saw success, the men had a tougher go of it:

As the top-scoring Team USA man, Eppelman finished 65th overall. It’s not yet clear why Allen logged just 21 miles, but an early report on the American Ultrarunning Association site noted that “the U.S. men’s team was beset by injuries and heat-related illness and did not factor in the team competition.”

Based on early, provisional results, Henrik Olsson of Sweden and Anne-Cecile Fontaine of France took the individual titles. Olsson ran 159.7 miles and Fontaine racked up 151.4, a performance strong enough to earn her third place overall.

Full results and photos are available on the International Association of Ultrarunners site.