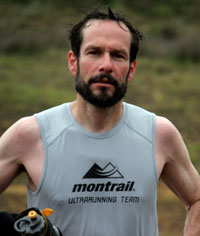 Sausalito, California (May 2). Eric Grossman and Kami Semick were winners of the Miwok 100K, which was contested under sloppy conditions here today. Grossman took the lead from Geoff Roes at mile 42, where Roes had stopped with stomach woes. Victor Ballesteros closed fast for second and Scott Jaime was third. All qualified for the 2009 Western States 100 with their finishes.

Semick won the race for the fourth time, but called it her “toughest win”. She trailed Anita Ortiz for nearly 60 miles before catching and passing her on the race’s last climb, a 1000-foot grind at mile 59. “I felt good all day – until the last four miles,” Ortiz said. “Kami was still strong and I was just out of gas. This was the gnarliest course I have ever run,” she continued, commenting as much on the weather and sloppy footing as the big climbs at the end. Starting about three hours into the race, runners were greeted with several hours of pelting rain and strong winds.