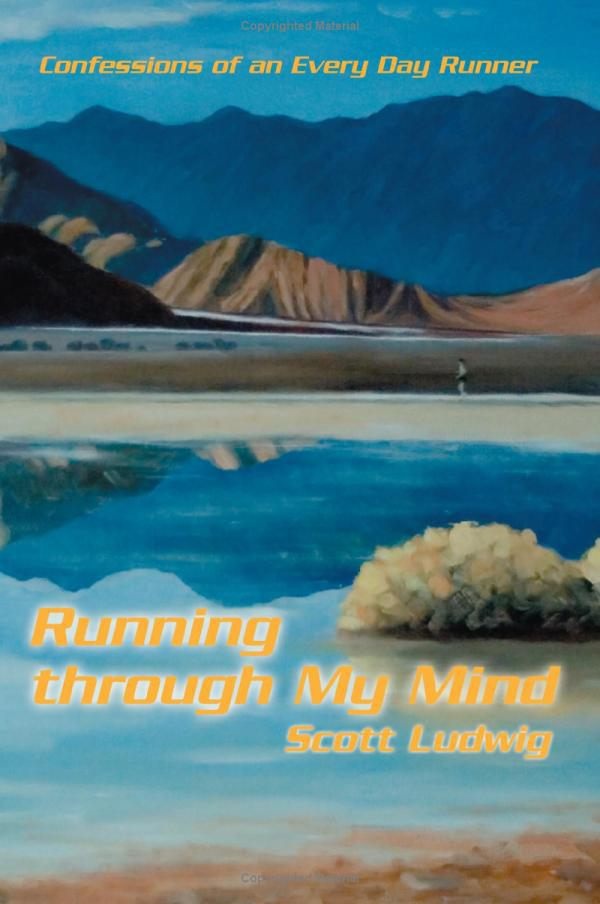 Running Through My Mind: Confessions of an Every Day Runner

I was beginning to lose my enthusiasm for running earlier this year: I fell and suffered an injury in Antarctica and my aggressive racing schedule was put on hiatus until the injury healed. I’ll be the first to admit I wasn’t my usual self when I laced up my running shoes – I had a horrific case of the ‘blahs.’ That all changed after I read Scott Ludwig’s autobiography Running through My Mind: Confessions of an Every Day Runner. His book has restored my passion for running and the camaraderie of my friends, and has motivated me to reach my running goals.

Scott does a lot of his writing in his head while he runs – perhaps providing the ultimate answer to the question “What do you think about while you run?” and he has a consecutive days’ running streak of almost 30 years. In the last 14 years his training miles averaged over 90 per week. Scott first realized his potential as a runner while in high school after finishing third in one 600-yard P.E. final exam run, but finishing “first among those that didn’t throw up afterwards.” It would be eight years until he ran again while attending the University of Florida. He ran with the Florida Track Club one evening in 1978, hoping to fall in with the slower group as they ran through campus. It wasn’t long until he found the slower group was…just him.

Now, after running more than 105,000 miles, Scott does not take the easy path to maintain his streak. Whether it be shredding the balls of his feet at Western States…or passing out from exhaustion/dehydration after finishing Badwater…or running across the state of Georgia in six days with a stress fracture…he has continued to run day after day.

Scott talks about his problems with “premature acceleration” – starting too fast and finishing too slow. He continues with his “premeditated moments of spontaneity” (PMS) – such as the run across Georgia. Scott’s training philosophy includes “running to the edge of exhaustion”, to prepare for ultra distances. As an example, for his 2003 “Boston Marathon Double”, he ran from the finish to the start and then from the start to the finish. He has a special talent for writing which makes me laugh out loud; and yet, when he writes about the loss of a good friend, his dog Magic, or his love for his family, I cry a bit as well.

Scott currently writes a monthly column for www.georgiarunner.com, and publishes the quarterly newsletter of the Darkside Running Club, Absolutely True…Tales from the Darkside (of which he is the president). His articles have appeared in UltraRunning and The Running Journal. All royalties from the sale of Scott’s book are divided between the American Cancer Society and the American Heart Association as a tribute to his parents who passed away before the book was published. It was their dream to see Scott realize his dream of writing a book about his love for running.

More than anything, after reading the book, it will make you want to run. After all, that was Scott’s primary intention for writing it in the first place. Overall, I see the benefits of this autobiography as a way for marathon and ultramarathon runners to laugh, cry and enjoy their sport with another every day runner like themselves. I’d like to tell you more, but I’ve got to lace up my running shoes and head out the door.